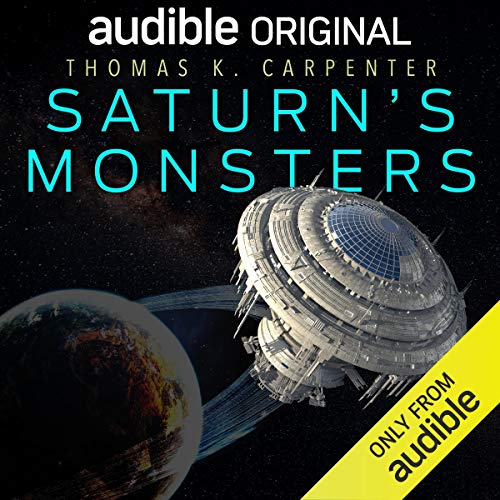 By: Thomas K. Carpenter
Narrated by: Amy Deuchler
Try for $0.00

Cassia Vici is on a one-way trip to Saturn - to help humanity reach the stars.

A towering genius who'd already solved the problem of death by making memory recording possible, Cassia leads a team of scientists and problem solvers to a station floating in the harsh winds of Saturn. Their mission: to grow interstellar ships using nanobots in the planet's material-rich environment. She called them "monsters" to help sell the project to a skeptical public.

Little did she know how prophetic that name would become.

But an unexpected death seeds doubt among the team, putting the mission in jeopardy. As her team struggles to save the future, Cassia is haunted by her past - a wife and daughter who died in the very technology that made mind recording possible.

With time running out, Cassia and her crew will need one final miracle to build the monsters that could become both their savior - and their doom.

Thomas K. Carpenter lives in St. Louis with his wife, two college-age children, and a dog named Loki. When he's not busy writing, he enjoys playing games—especially turn-based strategy games—listening to music and traveling. He's published more than 30 novels in the science fiction and fantasy genres. His best-selling Hundred Halls series about a magical university spans multiple series and is best begun with Trials of Magic. Keep up with his travels and writing by joining his newsletter, also on his website.

Amy Deuchler was born and raised in the Chicago area. She spent her childhood reading and performing in plays, so narrating audiobooks is the dream job for this librarian-theater nerd. She is currently a finalist for Best Mystery in the 2021 Independent Audiobook Awards, and was a finalist for Best Female Narrator and Best Mystery in 2020. Her voice is warm, intuitive, and clever, described by listeners as "a very smooth voice" and "a delightful tone."
When not narrating, Deuchler can be found designing lights and scenery for theater, doing any kind of handmade craft, and biking. She also loves to spend time exploring the Milwaukee/Chicago area with her boyfriend and doting on their three cats.
ORIGINALS

Explore galaxies, planets, and asteroids with these stellar listens that will launch your imagination into outerspace.

There’s a certain magic in losing yourself in the imaginative world of science fiction. Settle in as reality fades away.

What listeners say about Saturn's Monsters

I couldn’t listen to this there was too much sexual content. I wish it was more of an actual sci of story with occasional sex than a romance novel with a sci if setting.

At this points I assume there’s a template provided by publishers for this type of story. Unoriginal and obvious.

When there is a concept, but no story

The author develops a few interesting questions, but the story that should take us from the questions to the answers is so boring and uninspired that the journey becomes a slog rather than an adventure or a wonderous or leisurely trip through an interesting plot or vivid setting...

At least the narrator was good...without the pleasantness ofnee voice getting through this would be impossible .

Literally created a stupid solution to a non-existent problem then repeated the stupidity again and again...

The science here isn't even fiction..its impossibly pointmess and conviluded. And in this authors version of the future all women are either lesbians or like the men disfunctional nuerotic bozos.At best this is a bad drugstore romance story.

This was a very good story. I thought it was extremely original and unique and it kept me completely immersed from start to finish.

Not sure what to expect but I grabbed the Audio Book for a quickie while I glued up some panels and wound up working late just to finish the story.

I’m not a sci-fi critic so I can’t speak to the technical aspects of the story but I truly enjoyed the characters and arc. For a short story the author did a great job introducing and developing the characters.....

SATURN'S MONSTERS
Is an amazing look at technology out pacing human development. This psychological thriller is short jaunt into the mindset of monsters and man. Exceptionally written. Audible is remarkably preformed.

It's an entertaining and small scifi. It may be a bit predictable, but it's still a nice listen while in the car or something. Some people seem to be complaining about the sexual tones, but the author really just alludes to the fact that the people aboard the shuttle have sex. There aren't any gratuitous sex scenes or anything, so unless you're some kind of purist who hates the mention of anything sexual, I don't think that's much of a downside. On that note, this book does contain some slightly graphic violence, so avoid it if you don't like that stuff either. Otherwise, it's a pretty chill listen. The narrator is wonderful. She does a wonderful job at pulling the story to life. She kind of makes the experience for me.

I loved this book. I hope Amazon turns into a movie one day because it would be epic to see on screen. I don't want to say why I loved listening to this book. So I don't give it away, however I will say this.
Honestly, this is some incredible awesome scifi writing right here. I especially loved the ending. To be able to fly forever under the stars forever. How freckin Awesome would that be especially, with the ones you love the most. Absolutely beautiful ending.

I felt rushed through the story. If that pace was intentional and I under appreciated the effect.. I guess that’s possible. But I was so invested in the possibilities when the story began and felt like I was eating a good meal that so easily could’ve been a great meal.