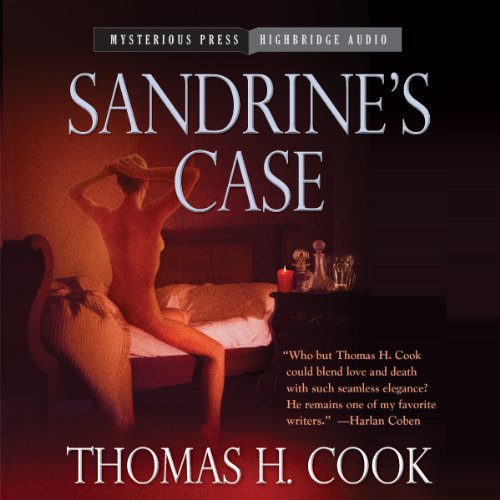 By: Thomas H. Cook
Narrated by: Brian Holsopple
Try for $0.00

Samuel Madison always wondered what Sandrine saw in him, he a meek, stuffy doctorate student and she a brilliant, beautiful bohemian with limitless talent and imagination. Yet on the surface their marriage seemed perfectly tranquil: jobs at a small liberal arts college, a precocious young daughter, a home filled with art and literature, and trips to some of the world’s most beautiful places. Then one night Sandrine is found dead in their bed from a deadly overdose of pain medication and alcohol, and Samuel is accused of poisoning her.

As the truth of their turbulent marriage comes to light, Samuel must face a town convinced of his guilt, a daughter whose faith in her father has been shaken to it's core, and the truth about his brilliant wife whose shattering secrets could set him free - or condemn him to death.

"Part of the thrill of reading this unusual mystery is that we're confined to Samuel's head, and he's not saying if he did indeed murder his wife. Another fine effort from the always insightful Cook." ( Booklist)

What listeners say about Sandrine's Case

I was hooked from the start!

Would you consider the audio edition of Sandrine's Case to be better than the print version?

I tried to read the print version several times but couldn't get into it. I decided to try it out on audio and I'm so glad I did! I was able to get wrapped up in this great book about love, loss, betrayal, and heart break. Really beautiful and heartfelt.

Have you listened to any of Brian Holsopple’s other performances before? How does this one compare?

I have never heard Brian Holsopple before

The book's description does not do the story justice.

What made the experience of listening to Sandrine's Case the most enjoyable?

This audiobook took me a while to finish. The story was an interesting idea but repeated certain themes over and over and over again. A shorter version would have been more powerful. I find it less dramatic once and author starts to drive home points to exhaustion.

If you’ve listened to books by Thomas H. Cook before, how does this one compare?

This was my first Thomas H. Cook book. I may give the author another try.

Have you listened to any of Brian Holsopple’s other performances before? How does this one compare?

The narration was definitely what kept me listening to this novel. Holsopple's performance does a perfect job of relating both the sadness and the arrogance of the main character. I wish the voice of Sandrine had been a little less negative and whining but all of the male character voices were spot on. The pacing also seemed to enhance the story.