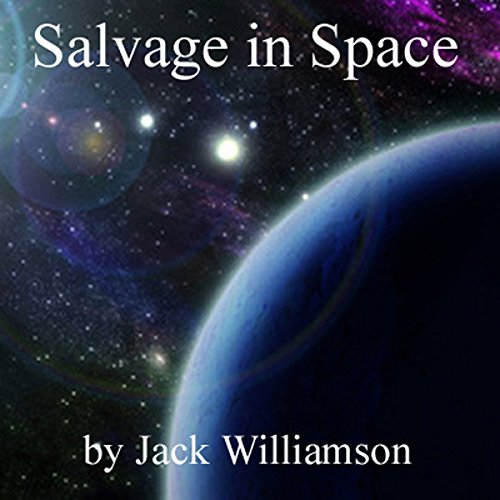 By: Jack Williamson
Narrated by: Jim Roberts
Try for $0.00

John Stewart Williamson, who wrote as Jack Williamson and sometimes under the pseudonym Will Stewart, was a U.S. writer often referred to as the "Dean of Science Fiction" following the death of Robert A. Heinlein. He won the John W. Campbell Memorial Award for science fiction in 2002.

In Salvage in Space, a spaceman who ekes out a living by mining precious metals from meteors comes across an incredible find - a ship drifting in space with no one aboard. When he gets inside, he finds that there is actually one creature he recognizes alive - a very frightened dog - and one he does not recognize because he cannot see it: an invisible alien that seems to have destroyed and somehow disposed of the entire crew. Now he and the dog must find a way to defeat this indivisible foe or face the same fate.

What listeners say about Salvage in Space

Jack Williamson was a classic pulp sci-fi writer, and this plot is one of the hoary best, but the treatment is so-so.

The plot: a sole traveler in interstellar space finds a derelict spacecraft with no crew except one living dog and one preserved young woman's body...and an invisible something...

Written in 1933, this is a very early take on an oft-repeated plot. I generally like Williamson's writing, which makes this a pretty enjoyable version, but the plot is quite predictable.

Jim Roberts' narration subtracts from the story. He doesn't sound like he is narrating, but reciting---and giving a pretty monotonous, plodding recitation at that. This is the second or third book I've gotten narrated by him, and I've been uniformly disappointed by his reading.