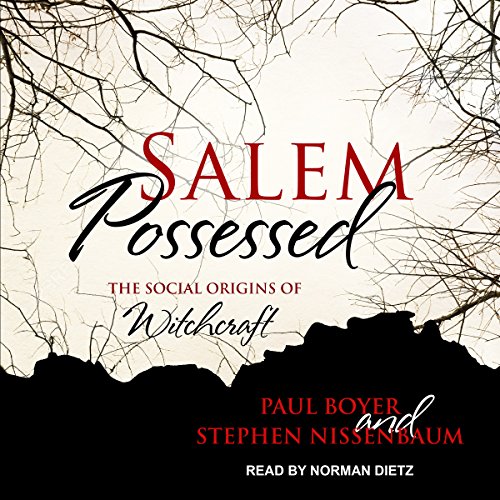 By: Stephen Nissenbaum,Paul Boyer
Narrated by: Norman Dietz
Try for $0.00

Tormented girls writhing in agony, stern judges meting out harsh verdicts, 19 bodies swinging on Gallows Hill. The stark immediacy of what happened in 1692 has obscured the complex web of human passion that climaxed in the Salem witch trials.

From rich and varied sources - many neglected and unknown - Paul Boyer and Stephen Nissenbaum give us a picture of the people and events more intricate and more fascinating than any other in the massive literature. It is a story of powerful and deeply divided families and of a community determined to establish an independent identity - beset by restraints and opposition from without and factional conflicts from within - and a minister whose obsessions helped to bring this volatile mix to the flash point.

Not simply a dramatic and isolated event, the Salem outbreak has wider implications for our understanding of developments central to the American experience: the disintegration of Puritanism, the pressures of land and population in New England towns, the problems besetting farmer and householder, the shifting role of the church, and the powerful impact of commercial capitalism.

"The authors' whole approach to the Salem disaster is canny, rewarding, and sure to fascinate readers interested in that aberrant affair." (The Atlantic)

What listeners say about Salem Possessed

I had to read this for a history class. The concept of a differing viewpoint was intriguing. I feel like the author did not execute this well. They incorporated aspects that really were not necessary to the plot.