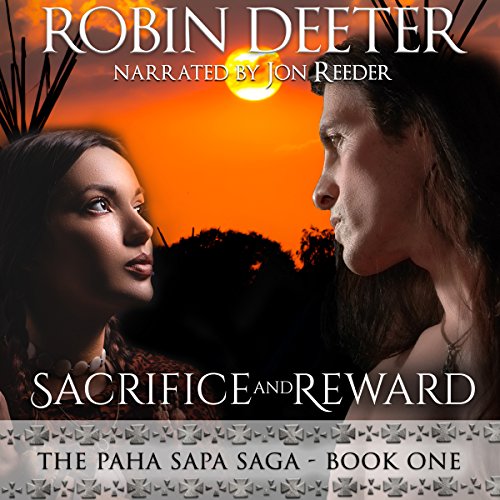 By: Robin Deeter
Narrated by: Jon Reeder
Try for $0.00

Which will be the victor: hatred or love?

Mid-18th century North America is a hotbed of unrest between many Native American tribes, who are feuding over territory. By this time, most of the Kiowa bands have been pushed west by the Lakota, who are on the move southward from the Great Lakes region. These invaders from the North want the game-rich, lush pasture lands of the territory for themselves.

However, one small Kiowa band is determined to remain in their early homelands in the region of what will be one day known as Eastern South Dakota. These two enemy tribes are brought face-to-face through the vision of a young Kiowa medicine man.

Sky Dancer, a beautiful, Kiowa widow, and a proud Lakota warrior, Dark Horse, are forced to marry in order to create an alliance between their peoples. Right from the beginning, they clash in a tests of wills, loathing each other on sight, making a happy marriage seem out of the question.

Will the sacrifice that is asked of them save their tribes? Can these two enemies overcome their initial hatred to find love in an unlikely place, or will distrust keep them from the reward they both crave?

What listeners say about Sacrifice and Reward

I throughly enjoyed this delightful Native story. It checked all the boxes when it comes to characters, interesting story, historical accuracy, and great narration. It is heartwarming and sweet yet shows the complications of tribal life. A must for anyone who enjoys a good historical love story. 💕

I was given this free review copy audiobook at my request and voluntarily left this review.

What made the experience of listening to Sacrifice and Reward the most enjoyable?

I enjoyed listening to the narrator his voice complemented the storey.

Chirping Cricket was my favorite character. I liked the way he embraced his purpose and tackled his responsibilities in spite of doubt, fear or pain.

The performance I liked best was his portrayal of Chirping Cricket's little sister Moon Beam.The voice he chose for her seemed perfect it made me smile.

Together the weak stand strong.

I received a copy of this audio book in exchange for an honest review. I never read a book by Robin Deeter before or listened to a book read by Jon Reeder. I enjoyed the book so much that I will have to search for more work by each of them. A big plus for me is that the book was clean.

Would you listen to Sacrifice and Reward again? Why?

Yes I would listen to it again. Why? Just because I love reading about the Indians and the west.

What was one of the most memorable moments of Sacrifice and Reward?

The most memorable moment is when Dark Horse realizes he is in love with Sky Dancer.

Jon Reeder did an excellent job with Dark Horse. Making him tender but yet a warrior.

For The Good of All

Would you consider the audio edition of Sacrifice and Reward to be better than the print version?

Yes, it was a beautiful story, with superb narration.

Sky Dancer was my favorite. Having suffered devastating losses, she persevered. She made the sacrifice for her people and found love-again.

Have you listened to any of Jon Reeder’s other performances before? How does this one compare?

No, but will in the future.

Not necessarily one moment, but it was amusing to watch Dark Horse transition from stern, mean, stoic warrior to a very sensitive and loving husband.

that's what I call a good story

If you could sum up Sacrifice and Reward in three words, what would they be?

What was one of the most memorable moments of Sacrifice and Reward?

How the medicine man come to be, I enjoyed reading about his vision and dreams. How they comes to him. I love the fact that he is so young and have so much put on his young shoulder.
How his people depends on him for so much information and wisdom.

There was so much detail and history about the people and the way they lived. I also enjoyed the romance and love story between the two main characters. It was a sweet romance with a little sex, this was an arranged marriage. A good read. Lots of back story, and history.

I was given a copy of this audio book for free, in exchange for a review. All opinions expressed are mine.

More than just a romance

This is a well-written story of tribal migration, conederations, and arranged marriage. Though there is some completion for the romantic complications, the story doesn't end with this book. It is the first in a series so the author is able to develop both the characters and conficlts very thoroughly.Having taught in a school made up of Ojibwa and then a school with a large population of Lakota, I found the novel very interesting. I kept comparing customs I know of with those featured in the book. Deeter did a great job with depiciting values and customs of the tribes. (I received this book for free in exchange for an honest review.)

Sadly, what could have been an exceptional book was dragged down by an untalented narrator. Hopefully any future novels by this author are give a more suitable narrator.

I really enjoyed this story about Sky Dancer and Dark Horse,from enemy tribes, who reluctantly agreed to marry to benefit their people. I like the way the author describes some of the differences between their tribes’ customs and language. I thought some of the secondary characters, such as Chirping Cricket, the young medicine man was a big plus to the story. Jon Reeder’s narration was very good.

My first book in this genre but not my last

This was my first book in in this genre but it won’t be my last. I’m particularly interested in reading more about the characters I met in this story and I hope more of them are turned in to audiobooks. I like the occasional historical romance but I’ve never listened to one set in in the USA before it was the USA. Nor have I listened to one featuring Native American characters. But I loved it!! The characters were well developed and interesting to follow. I loved the h’s personality and her loyalty to the memory of her late husband. I don’t know if the historical information was accurate but it felt realistic to me.

The narrator was perfect for this book. His accent suited the characters and the story perfectly. I would love to hear more books read by this narrator but sadly, there aren’t any to choose from.

I really enjoyed this story, I was not sure what I expected before I started to listen to this recording but it was not this wonderful saga. I am so impressed with the author's empathy and obvious love of the people she writes about. Right from the start I felt so close to the two tribes and their struggle to integrate with each other and just forge out an existence in a harsh world. The struggling lovers and the wonderful character Cricket and the old Chiefs are so endearing and bring the tribes to life. The narration was excellent I can't fault it and I am so glad I had the chance to listen to this wonderful story. It deserves the 5 stars I gave it.

This is the first book I have ever read or listened to by Robin Deeter but it will most certainly not be my last. This book was beautifully written about Sky Dancer a lovely Kiowa widow who has locked her heart away after the deaths of her husband and child and Dark Horse an high ranking Lakota warrior. But it's not just their story it is the story of their two respective tribes and how by making an alliance and working together they manage to forge true friendships and love and enemies do indeed become friends.

One of the main characters in this book is the medicine man for the Kiowa tribe, Chirping Cricket, he is very young and after the death of his mentor he is forced to step up way too soon and become the medicine man. Whilst no one in the tribe expects much from him it soon become obvious that Chirping Cricket has hidden talents which will be used to the benefit of both tribes.

It is at Cricket's instigation that a marriage is arranged between Sky Dancer and Dark Horse and the start of the alliance is forged but it is also Cricket who saves the day by way of his talks with and visions of The Bison. There is lots of action to the story and we are given a wonderful insight as to how the different native american tribes lived as well as learning about some of their customs and taboos.

Robin Deeter's attention to detail and descriptive qualities are excellent and how we watched the many characters in this story grow and change was very well done. This is the first book of a new series and you could read or listen to it as a standalone but I for one will be eager to listen to the next book in this very good, well written and thought provoking story.

I was gifted a copy of this book and am writing this review voluntarily.