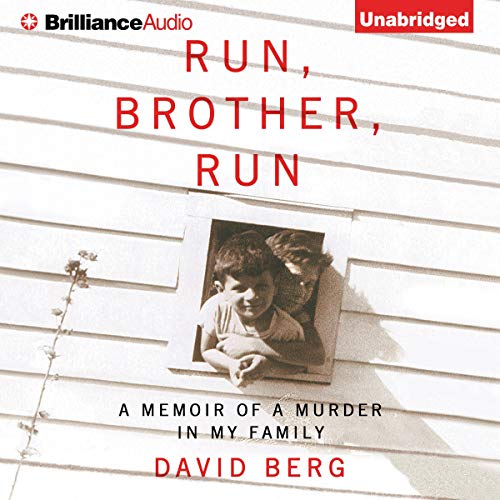 By: David Berg
Narrated by: Geoffrey Alan Berg
Try for $0.00

As William Faulkner said, “The past is not dead, it’s not even past.” This observation seems especially true in matters of family, when the fury between generations is often never resolved and instead secretly carried, a wound that cannot heal. For David Berg, this is truer than for most, and once you listen to the story of his family, you will understand why he held it privately for so long and why the betrayals between parent and child can be the most wrenching of all.

In 1968 David Berg’s brother, Alan, was murdered by Charles Harrelson, a notorious hit man and father of actor Woody Harrelson. Alan was only thirty-one when he disappeared; six months later his remains were found in a ditch in Texas.

Run, Brother, Run is Berg’s story of the murder. But it is also his account of the psychic destruction of the Berg family by the author’s father, who allowed a grievous blunder at the age of twenty-three to define his life. The event changed the fate of a clan and fell most heavily on Alan, the firstborn son, who tried to both redeem and escape his father yet could not.

This achingly painful family history is also a portrait of an iconic American place, playing out in the shady bars of Houston, in small-town law offices and courtrooms, and in remote ranch lands where bad things happen - a true-crime murder drama, all perfectly calibrated. Writing with cold-eyed grief and a wild, lacerating humor, Berg tells us first about the striving Jewish family that created Alan Berg and set him on a course for self-destruction and then about the gross miscarriage of justice that followed.

As with the best and most powerfully written memoirs, the author has kept this horrific story to himself for a long time. A scrappy and pugnacious narrator, Berg takes his account into the darkest human behaviors: the epic battles between father and son, marital destruction, reckless gambling, crooked legal practices, extortion, and, of course, cold-blooded murder. Run, Brother, Run is a raw, furious, bawdy, and scathing testimonial about love, hate, and pain - and utterly unforgettable.

Would you consider the audio edition of Run, Brother, Run to be better than the print version?

Is is read by a member of the family.

David Berg is one of the best attorneys in American history. From being the youngest attorney to win at the U.S. Supreme Court to battling the Texas trial of the Century in Wyatt v. Sakowitz his career is a never ending trail of unlikely victories. This book is the ultimate inside story on how a poor Jewish kid in 1970 redneck Houston, Texas can survive a grossly dysfunctional family, murder of his best friend (and brother), and countless other challenges to emerge as one of the wealthiest and most respected trial lawyers in the world.

I have seven thousand books in two audible libraries (since I gave up years ago on getting any assistance in merging them). This is only the second that has demanded that I stop (from my own bizarre schedule) to write a review.

This is one of the ten best books available on Audible. In its own way worthy of East of Eden, Water for Elephants, Lonesome Dove, and my other personal favorites.

David's watching Percy Foreman beat the dumbass prosecutor so badly at his brother's murder trial that he (David) would have voted to acquit - based on common law marriage rules of testimony.

Never contend with a man who has nothing to lose.

I assume that it was David's son who did the audio. Look out Scott Brick.

What made the experience of listening to Run, Brother, Run the most enjoyable?

This book held my attention from the first word to the last. Such a sad story, the disfunction is probably typical of many families, however it ended in such tragedy.

I enjoyed the details of the book. I feel the reader knew every detail of life and death of Alan Berg and the trail of Harrellson.

What does Geoffrey Alan Berg bring to the story that you wouldn’t experience if you just read the book?

I felt the connection he had to the story.

I could have done without all the swearing.

the title is misleading. the author spends a large part of the book discussing himself, instead of his brothers death. also, the 2nd half of the book is in the courtroom and pretty boring to listen to.

I was truly surprised that I became spellbound & shed a few tears and laughs.

nonfiction story with many interesting subplots

The author relates an interesting true crime and court drama in an engaging style. The reader comes to know the main characters.
The book includes comic relief and wit. The sadness of the crime is not overwhelming to the reader.
This book includes a primer on criminal law and is also an autobiography of the attorney who wrote it.
The Narrator does a good job and is pleasant to listen to.

Exceptional Tribute to a Family and its Challenges

What made the experience of listening to Run, Brother, Run the most enjoyable?

The narrator, Geoffrey, has an excellent tone and cadence to his voice. Also that the story was told by first person narrator who shared his intimate thoughts, feelings, and impressions. In addition, this is a true story that does not sound like a documentary. I do not remember why I did not realize who was the murderer in this story. Interesting tibit that kept me hanging on to the very end.

What other book might you compare Run, Brother, Run to and why?

Not sure. May be a Coben, Grisham or Patterson book, but not one in particular.

Which character – as performed by Geoffrey Alan Berg – was your favorite?

David, of course was the favorite. Everyone else runs a close second...really

I am not sure if this should be a movie. It may be too painful for two families. Also, do not want to have the "Hollywood" or "Lifetime" treatment ruin the authencity of this story.

Thank you to the author and his son for sharing what has to be a painful memory. My blessings to the families. Both of them.

I DID NOT ENJOY THIS ONE.

What disappointed you about Run, Brother, Run?

I READ A LOT OF TRUE CRIME. THIS STORY WAS NOT INTERESTING AT ALL. SOMETHING SEEMED TO BE MISSING FROM THE BOOK.

WELL I LISTENED TO JOYLAND NEXT.

Did Geoffrey Alan Berg do a good job differentiating all the characters? How?

NOT REALLY. BUT THESE GUYS WERE ALL THE SAME. BOTH THE HARRILSON BROTHERS AND THE BERG BROTHERS SEEMED LIKE NOT-SO-NICE PEOPLE.