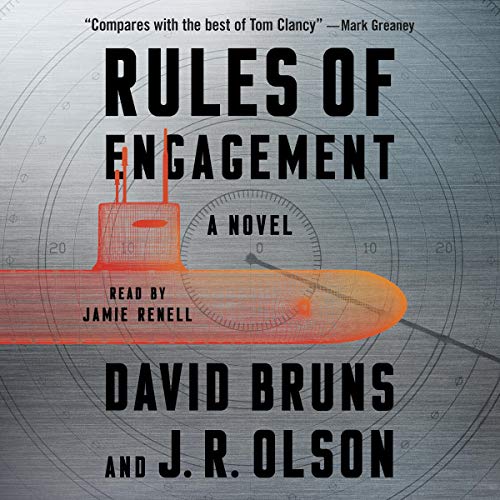 "In Rules of Engagement, David Bruns and J. R. Olson deliver a captivating and utterly authentic portrayal of modern day combat that compares with the best of the timeless classics by Tom Clancy, Dale Brown, and Stephen Coonts. This one must not be missed!" (Mark Greaney, number one New York Times best-selling author of Mission Critical)

A terrorist breach of the computer systems of the three most powerful navies is about to set them on a collision course for World War III.

Rafiq Roshed is one of the most wanted men in the world. A terrorist with a virulent grudge against the West, he’s disappeared into North Korea where he quietly launches cyber sneak attacks in service of Kim Jong-un. But now he’s about to unleash his virtual masterpiece - a computer virus that, once inserted into the command systems of a military, not only takes over, but also learns the art of war. First penetrating the Chinese, he has their war machine launch a series of attacks on the US Pacific forces.

Don Riley, head of US Cyber Command, discovers that not only have the Chinese lost control of their military, but the same virus has infected the American network. It’s only a matter of time before the US loses control of its own military. His secret weapon in this war is a trio of supremely talented midshipmen from the US Naval Academy, who uncover the infiltration, and are working to track down the elusive terrorist.

But time is running out. China and Japan have lost control of their military and the US is in danger of doing the same. The weapons are hot and the result is an ever-larger real-world conflict where casualties continue to mount. The only remaining hope is to find and stop the attack at its source - before time runs out.

What listeners say about Rules of Engagement

The very definition of a military thriller.

This book is the very definition of a military thriller. Truly exceptional on many levels. Loved it! The narrator did a great job.

Should be a movie or comic book

Techno-Thriller lite. The cybertech and its weaponization is interesting, but it's about the only part that really is. The characters are very 2D at best. The narrator really made this all even worse by having essentially only one voice and one tone/inflection regardless of what was happening. Sort of feels like this is a 'book' version of a screenplay from a generic thriller film. It's a good thing it was not any longer, as I was running out of patience for something to actually happen. It compares with Tom Clancy the same way Coors Light compares with beer.
Don't waste a credit, this will be in the discount listings before long.

I didn't know what to expect, Im glad I took a chance on this book. It was thrilling and fast paced. The story moved fast and had excellent character development. Loved the addition of the mid shipmen. The unprovoked as literally made my blood boil. The only downside was how quickly it came to an end with very little closure. Almost rushed. The narrator needs to brush on Naval terminology too.

I really enjoyed this book. My only thought s are is this book two in a series. I felt like something s I should have already know about but even with that it's still a great book.

If you enjoy Tom Clancy this is similar. It kept me interested which is great!