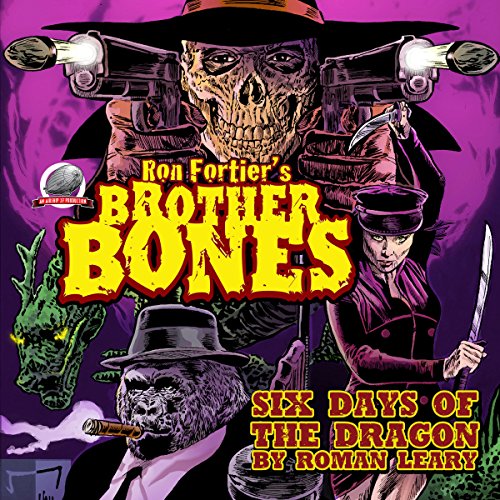 When the souls of the innocent cry for justice, one man hears their call: The Undead Avenger - Brother Bones. He stalks the Depression-era streets of Cape Noire, waging a never-ending war against the forces of darkness. Bones has never met a foe he could not defeat, but now he faces an enemy unlike any he has ever known. With a motley crew of unlikely allies - and his silver-plated twin .45s - Bones must stop an ancient evil that threatens not only Cape Noire, but the entire world.

Brother Bones is back to cut a swathe of destruction through his first full-length novel!

What listeners say about Ron Fortier's Brother Bones: Six Days of the Dragon

Brother bones, undead avenger, returns in his second book. Leary really lays it out in this book. Book one was the set-up, this book is the knock-out punch that follows. I want to start by giving some praise to J. Scott Bennett. The man is a vocal beast, and his talant for voices, inflections, emotionally charged dialouge, and mood setting is incredible. He really brings this novel to life.

Here we get to visit Cape Noire for about a weeks time, with a showdown that is frought with blood, death, and revenge. Oh, someone might have mentioned something bout a dragon.?! Anyway, the book is frought with twists and turns, and you will not want to stop reading once you start. This is pure pulp, not the stuff in your orange juice, either. And the noir overtones just drape the tale in soothing shadows. One nice thing is that the characters are not caricatures or cardboard cutouts, but fully formed, believable actors in this tale.

If you like Pulp, noir, the occult, undead, revenge tales, or just great action scenes then this book is for you. Go get it now, and enjoy life for a few hours.

Would you listen to Ron Fortier's Brother Bones: Six Days of the Dragon again? Why?

Yes, there are twists and turns that fill the story. A lot of "active" characters. Good and bad.

This is a tale of revenge, payback. Those always get my attention and keep it, so YES, it is"edge of your seat" listening in that regard.

What about J. Scott Bennett’s performance did you like?

Diverse choices for character voices. Very well suited to this reading. There are a lot of characters.

It made me fret for some characters' predicaments and cheer for the revenge that was exacted!

Thank you for the opportunity to listen.

This audiobook was provided by the author, narrator, or publisher at no cost in exchange for an unbiased review courtesy of AudiobookBoom dot com."

Ron Fortier's Brother Bones is an awesome noirish thriller. Six Days of the Dragon was excellent. I love the characters, the situations, and the setting. These are great stories and I hope they're continued. Roman Leary's a great writer and this was a gem.

J. Scott Bennett's narration was top-notch. His voice inflections are incredibly good and he was a perfect fit for this book. I can't imagine anyone else reading these. He's a super talented voice actors and one of my top favorites.

"This audiobook was provided by the author, narrator, or publisher at no cost in exchange for an unbiased review courtesy of Audiobookboom dot com."

Will remind you of the Shadow (to which there is a subtle nod to) and other such shows. A very noire style of presentation. Brother Bones is a great avenger for the side of good. Dick Tracy style criminals mad scientists mystical powers secret societies and more. The narrator gives life, voice and character to a host of unique characters and puts you right there with them. Well written well read. The 2nd installment of the Brother Bones series that I have read. Love it and can't wait for more. I received this audiobook from the author narrator or publisher for free via audiobookboom in exchange for an unbiased review.

An undead avenger of the innocent...a dragon...a man who's been bewitched into the form of a gorilla... This story has an old time feel, like something out of the 1950s, but with major twists. It is a creative and fun listen. The narration does justice to the variety of characters, and I enjoyed every minute of it.

Where does Ron Fortier's Brother Bones: Six Days of the Dragon rank among all the audiobooks you’ve listened to so far?

The gorilla due to the pulp references from old books I've read.

What about J. Scott Bennett’s performance did you like?

He was a brilliant actor and brought the characters to life. I really enjoyed his reading.

I did but I was unable to. I could have spent a lovely Saturday reading this.

An excellent piece of pulp!

Personally, I think this book might be better if you were read a physical copy. The narration is great, but I found it difficult to follow the various story lines and all of the active characters due to a stark lack of transition. I had to go back and re-listen to many parts of this book, because sometimes I would be utterly lost as to what was going on, and that caused me to be unable to multitask while listening.

Nonetheless, this book is highly enjoyable! I adore the old-timey feel of the dialogues along with the dark and violent subject matter. Brother Bones is my favourite character, and the raspy narration for him by J. Scott Bennett really brought him to life. Mr. Beast is another very interesting character, and I found myself anxiously waiting for the scenes to shift back to either Brother Bones or Mr. Beast. The fact that it is set in the depression era just makes it even more delightful! If you love pulp stories then you should definitely give this book a try! This book is very complex but a whole lot of fun, and it would make a wonderful addition to anyone’s library!

I really liked this book. I never thought I would be a fan of pulp fiction, but this series (I've read two books so far), has shown me that I really am a fan. The book is very clever, dark, and even funny at times. There are lots of interesting characters and interesting situations. I listened to the Audible audio version of this book narrated by J. Scott Bennett, and I just love his narration. In fact, when I think of Bennett, I automatically associate him with Brother Bones and with Jake Bible's "Fighting Iron," even though I've listened to many other books narrated by him. I think these particular series of book are his magnum opuses. I can't say enough good things about his narration. Overall, if you like clever pulp fiction, this is the book for you.

Great continuation and furtherance of the adventur

If you liked Brother Bones: The Undead Avenger, then you should like Six Days of the Dragon as well. If you haven't listened to Undead Avenger yet, then you might want to do so first... Six Days of the Dragon develops the characters and world introduced in the first volume...and tells an exciting, jaw-dropping tale of supernatural good versus high stakes supernatural evil! The narrator's voice takes some getting used to at first, but his performance is excellent! On to the next volume!

Such a fun, dark read!

Really enjoying these books. Written really well and are easy to listen to.
Scott does a great job with the narrating too and is perfectly suited to this kind of book!
This is my honest opinion of a free review copy.

"Once upon a time there were two brothers..."

What made the experience of listening to Ron Fortier's Brother Bones: Six Days of the Dragon the most enjoyable?

With more horrible inhabitants than Gotham City, Cape Noire must be the capital of crazy characters, dastardly deaths and outrageous ideas. And all this even before - the Dragon is coming! It is fast paced and funny with twists and turns enough for a maze.

What does J. Scott Bennett bring to the story that you wouldn’t experience if you had only read the book?

I had.not previously read anything by Roman Leary nor heard a book read by J.Scott Bennett whose interpretation performance brought the whole world to life, giving just enough sinister undertone to his reading to embue a tension without distracting from the comedy. I will be looking out for more works from both author and narrator in the future.

I received a complementary copy of Ron Fortiers Brother Bones, Six Days of the Dragon from the narrator via Audiobook Boom in return for an honest review. Thank you so much. Without it I might have missed the pleasure of this little gem. I can wholeheartedly recommend it to anyone who loves the comic book idiom or simply enjoys great non stop action, murder and mahem, colourful characters and lots of laughter. Absolutely brilliant.