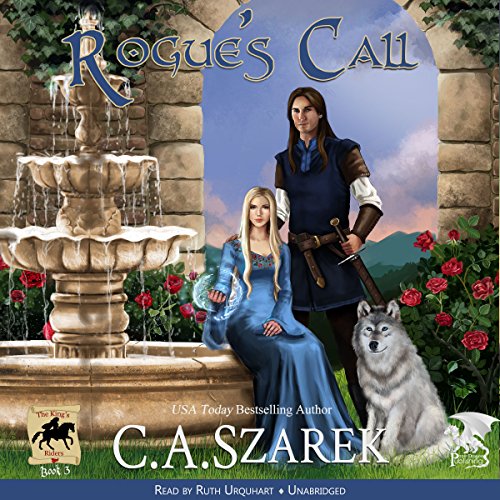 Raised in the security of the king's castle, Lady Elissa Durroc remembers nothing of the death of her family or how she survived it. As an elemental mage with control over all four elements, her powers are rare. And coveted by dark magic. None darker than the mage who killed her parents.

When the king learns the mage knows Elissa is alive, he orders her to Greenwald under the guise of choosing a husband. Her protection falls to Sir Alasdair Kearney, a knight whose prowess on the battlefield is rivaled only by his appetite for women. Alasdair's not sure what to make of being a glorified nursemaid, despite Elissa's beauty and intriguing magic.

The rogue has rules. Rules that don't involve being tempted by his noble charge.

Elissa is drawn to the knight, even though he's not on her list of suitors. Can she guard her heart and her magic? And when the dark mage comes after her, will it be too late to matter?

What listeners say about Rogue's Call

I'm really enjoying this series! This installment was wonderful, and the writing flowed beautifully! The audio narration was terrific, and the narrator's voice fits the story just right. I'd recommend the audio version. In Rogue's Call, Elissa is a powerful elemental. She has power to deal with water, earth, fire, and air. I love the magical elements in this series! I'd love even more! There's some bad men in search of Elissa, so they can steal her powers. They don't know who they are looking for, so they are murdering people that may be her. The king knows that she is in danger, so instead of telling Elissa about this, he tells her she needs to marry. Elissa has 4 suitors that she needs to meet with. Elissa isn't very happy about this; especially when she's attracted to ladies man, Alasdair. He's a knight in Greenwald. Alasdair feels for Elissa as well, but doesn't feel he's a proper choice for her, so they dance around each other. Alasdair is assigned as Elissa's guard during her meetings with the suitors, and to keep her safe from the bad men. Elissa and Alasdair are sweet together and I loved their connection, but Alasdair is often a complete jerk to Elissa in the name of pushing her away. I could handle his hot and cold, but then he goes to the whore house and he went way down in my book. I don't care that it wasn't cheating, or that it wasn't a all the way type of thing; it was still very, very bad in my mind. So, I was pissed at him, but I still loved the story, so I just pushed that out of my mind. Other than that, this story is exciting and interesting! Excited to read more by Szarek!

Another great addition to the series

I have enjoyed each book in this series so far. The characters are all unique and entertaining. The romance is in the forefront more than the fantasy part, but it doesn’t detract from the book at all. I have fallen in love with the all the many characters and am eager for the next book.

The narrator does a great job of voicing the characters and pulling you into the story. She emotes well and makes you feel everything that is happening.