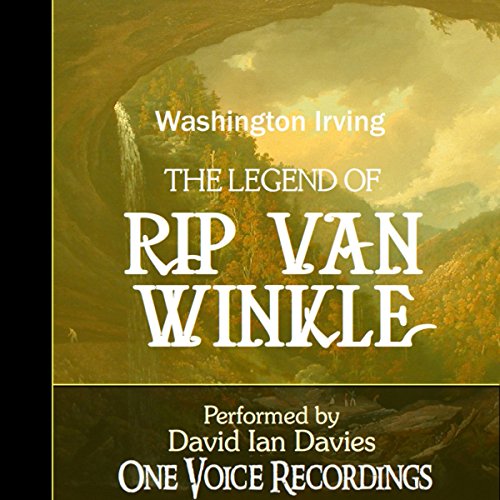 This delightful Washington Irving tale, based upon legends and folklore of his day, follows the loveable but lazy Rip Van Winkle's escape from his constantly nagging wife into the peaceful hills of the Catskill mountains with his squirrel gun and his loyal dog, Wolf.

There, he encounters a strangely attired gentleman who gets his help in carrying a huge vessel filled with liquor to a cavernous hideaway in the mountainside. Inside, a group of equally strange and morose men play ninepins as they quaff the liquor.

After Van Winkle drinks to excess on the sly, he stumbles his way back to the woods and falls into a deep sleep beneath a tree. He awakens to find it is 20 years later - and the American Revolution has occured as he slept!

David Ian Davies is one voice sounding like many!

Would you listen to Rip Van Winkle again? Why?

I remember the story of Rip van Winkle from the time that I was +/- 5 years old. I was glad to come upon this fairytale.

What other book might you compare Rip Van Winkle to and why?

Like Hansel van Gretel, Cinderella, Puss in Boots it deserves to be listened to time and again.

What does David Ian Davies bring to the story that you wouldn???t experience if you just read the book?

That is what makes this production so marvelous. David Ian Davies brings the story alive by making you believe that his voice is that of many. While it is a bit irritating to hear the surname

Rip van Winkel is a story that reminds you that the past only exist in our memories, but that enough of it remains in the present so not to be estranged. Irving's fine humor brings a nostalgic smile that makes it worthwhile to listen to this book again and again.