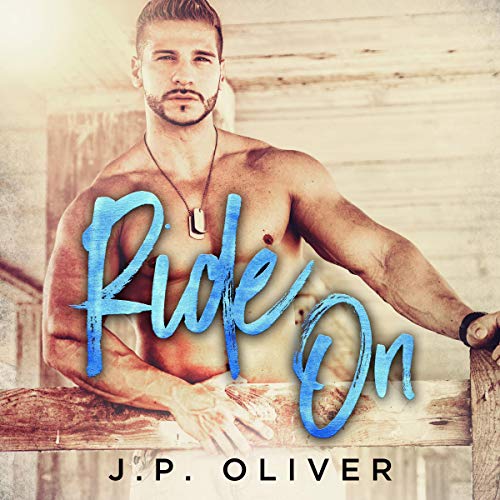 By: J.P. Oliver
Narrated by: Christopher Kauzlarich
Try for $0.00

When you’re faced with going home after so many years of being an adult, on your own, you realize just how much you’ve changed. The old gas station isn’t the same one you bought candybars at anymore. Your school doesn’t look familiar. The streets are cracked and broken - and you realize you are, too.

Breakaway Ranch isn’t for sale, but the bankers disagree.

Like everyone else in the community, Jacob was practically born riding a horse. As a child, his mount fell into a hole and left both of them with shattered bones. He lost his horse that day as well as most of his range of motion below the waist. He left his childhood crush and his home behind shortly after, growing into a powerful entrepreneur who wants nothing more than to never see the city’s sign again.

When Dan’s ex outed his sexual preferences to his family, he lost everything. It’s only through Breakaway Ranch that he’s found healing. So when bills start to mount and the loan sharks swim in, he knows he’s got a limited amount of time before he’s out on the street with too many mouths to feed. When they bring in a young man with more money than sense, Dan can’t believe who it turns out to be.

Will Jacob confront his past and find comfort in the arms of a long-lost friend? Or will Dan find himself with nowhere to go once again?

Find out in Ride On, a gay romance audio book intended for adults only. As always, we guarantee a happily ever after - but at what cost?

What listeners say about Ride On

Can You Put Someone Else's Dream First?

Jacob is still struggling to heal from an accident that broke his back years ago. Physical therapy is part of his every day life, as are stretches and weight training. Against all expectations, Jacob is walking short distances again!

Sitting in his wheelchair, having others wait on him has never been what he wanted for himself. As an independent man, Jacob works hard to not be a burden to his sister and brother in law. He's learned that he excels at real estate, flipping property in particular. When he finds a ranch that is near bankruptcy, he heads out to make an offer to the owner. A subdivision would fit nicely right there.

Even though knowing his ranch is in financial difficulty, Daniel begs the bank manager for a loan extension. After the refusal, Daniel is desperate to find some way to hold on to his property. Will he accept an offer from Jacob, a man who hates everything ranch related, or make a deal with his estranged father?

So this is a short sweet listen with an interesting little plot. It could have been a little longer and better developed but overall not a bad listen. Narration keeps it entertaining.

This was a light and enjoyable read. I felt the plot was nice and solid with likable main characters. The narration was very good and a new to me narrator.

I was given this book in exchange for an honest review.

The narrator has a pleasant voice that I enjoyed listening to.

This story packed in a decent amount of plot and character development for its length.

There is a moderate amount of angst.

I enjoyed the story and was satisfied with the ending.

Right On, Ride On!

Ride On by JP Oliver is a second chance, mm romance about Jacob and Dan, they use to be childhood friends until Jacob left. Not willingly per-say; Jacob grew up in a community where you are born practically riding a horse and when his mount fell into a hole and left him and his horse with shattered bones, Jacob not only lost his horse but also his range of motion below the waist. Soon after he left his childhood crush Dan and his home, growing into a powerful entrepreneur who wants nothing more than to never see the city’s sign again. Well until now. Breakaway Ranch isn’t for sale, but the bankers disagree with Dan. Breakaway Ranch is literally all Dan has left; after his ex outed him to his family he lost everything except for this ranch. Breakaway Ranch was Dan's escape, his healing place, so when the bills start to pile up to keep the ranch, he gets financially deep with the bank. Dan is out of options, so when they bring in a city slicker with more money then what he can do with, Dan can’t believe who it turns out to be, but Jacob! His childhood crush! Like oil and water, these two are complete opposites who share the same feelings but can they confront their fears and trust one another? JP Oliver writes another sweet love story about two men who could be more different and alike. He's also incorporates what some authors shine away from: disability. He's managed to make it work (I had no doubts) and had me engaged till the very end. This was my first Christopher Kauzlarich listen and well he was good, not great but good. I wish he would have differentiate his voice a little more but he still made it enjoyable. 4.5 starts for Ride On. Happy listening all!

Did the story keep me engaged: yes
Were there any parts I found annoying: no
Did I feel an emotional connection to the characters: yes
Would I listen to it again: yes

Nice easy listen with good pace and interesting characters.
I would have liked this one to be longer - there are a few unanswered questions and a couple of inconsistencies, but if you don't look to close it's an enjoyable couple of hours.

Christopher Kauzlarich is a new narrator for me, he's easy to listen to and did a nice job on this title.

When things go bad, go to bed with an old friend.

The same thing works for when things go good, but when you are homeless without money or a job and also have a horse, even a barn might smell good.

Bankruptcy or long lost boyfriend, both can be trouble, but the horse can provide the glue to get them back together better than the glue factory.

Was there special meaning in the saddle he gave to Jacob for his 12th birthday? Was the crippling injury worse than the memories of trail rides on Butterscotch for Jacob? Why was Thomas doubtful then dumbfounded as partnerships and relationships ring up a new development without houses? Can Jack get off the hook after kicking out his son and watching him fail? Can Momma figure out who is wearing the saddle now?

Who cares? It's happily ever after on the ranch for the loving couple! Just read it to find out which couple gets the ranch house and if the horse can keep the barn.

I enjoyed this emotional, sometimes heart-breaking, second chance love story. Two former friends, separated by tragedy, meet again years later, but now one of them is trying to buy out the ranch the other has put his whole life into. There is some angst and pain, homophobia, strained family relations, and new beginnings. I loved the characters and how they rebuild the friendship they once had into something more. So sweet, as they both figure out what really matters most to them.

The narration was excellent. The character voices were distinct, and the delivery was clear and well-paced.

I received a copy of this audiobook at my request. This is my honest, voluntary review.

J P Oliver has written another great story. It contains everything to make you want to read non-stop to see how it goes. It makes your heart smile with hope for others going through similar situations.

Ride On to your Second Chance

Jacob and Daniel were best friends when they were kids and did everything together. Jacob had a terrible accident breaking his back. He left home for medical treatment in the city and never came back. Danny never knew of the accident and was only told he went to the city to live with family. Jacob was always gay and it wasn't news to anyone. Daniel, on the other hand, had come out to his parents in recent years and was beaten and thrown out.
Jacob is still in physical therapy and still fighting to walk and not use the wheelchair. He is in business with Thomas, his brother in law, and they have a property development business together. Jacob has a talent for finding properties that the bank is about to repossess and buys them cheap and develops them into opportunities.
Daniel purchased and built himself a horse ranch, but due to the general decline in the economy and of the area business was bad and his ranch was failing badly. He was behind in payments to the bank and after being refused by the bank for a second loan Daniel doesn't know what to do.
The bank is about to foreclose when two men, along with the loan officer from the bank, show up offering to buy the property paying off the bank loan and any debts associated with the ranch. Jacob pretends not to recognize Daniel his childhood best friend even though Daniel knows him. When they offer the deal to buy his property out from under him Daniel throws them out, but later gives in. Jacob is feeling really bad about it and talks himself into calling and going out to see Dan. After a little semi forced proximity they two begin getting to know each other again and are so attracted to one another there are sparks. When Dan kisses Jacob and blows his mind they both begin to want more, so very much more. Second chances just might fix both of these broken men. You'll love this book, give it a listen.