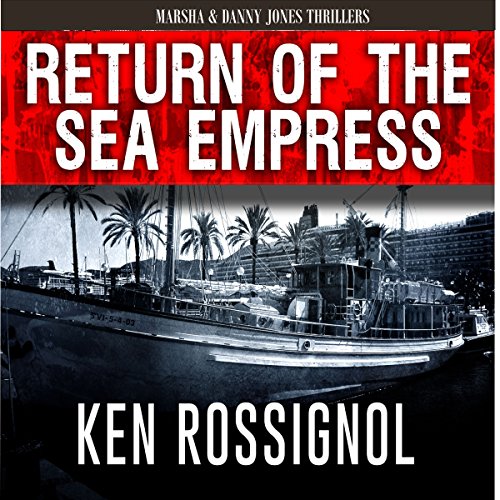 Return of The Sea Empress

By: Ken Rossignol
Narrated by: Joshua Bennington
Try for $0.00

After the crash of a explosive-laden seaplane into the aft end of The Sea Empress as it left a Caribbean island, the luxury cruise ship has been refurbished and repaired and leaves Rome for it's first trans-Atlantic voyage.

Danny and Marsha Jones once again are leading the security team for the flagship of The Seven Seas Company. She, a retired U. S. Secret Service agent and Danny retired as a homicide cop in Maryland find new challenges in protecting the passengers and ship from threats and cold-blooded killers.

How does the voyage of The Sea Empress take on a surprise guest and set the stage for an assassination attempt in the ship's theatre? How does the acclaimed Broadway actor, brother of the President of the United States play a role in thawing relations with the communist dictator of Cuba?

Listen and find the latest use of new media in the breaking news of the day with the dictator of Venezula coming into conflict with Cuba. Learn of the adventures of Capt. Johnny Black as he begins snorkling trips for Sea Empress passengers and trades dealing with the backstabbing politicians of the Maryland General Assembly for the peace and tranquility of swimming with sharks.

Tired of boring cruises with ports that all look alike? Try a trip on The Sea Empress once again, following up on the adventures first brought to life in The Privateer Clause.

This second story by Ken Rossignol is sure to liven up your deck time with this audiobook....Smooth Sailing on The Sea Empress!

What listeners say about Return of The Sea Empress