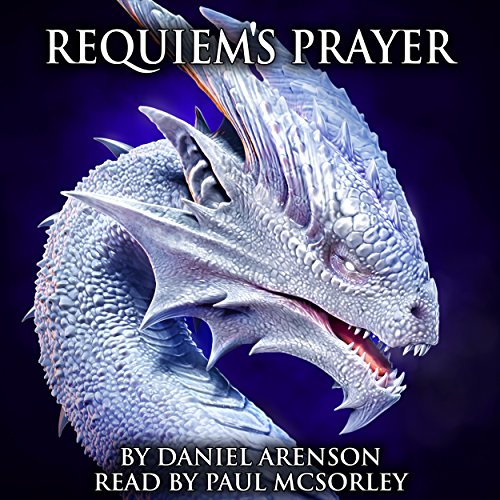 By: Daniel Arenson
Narrated by: Paul J McSorley
Try for $0.00

Requiem. A kingdom forged in flame and blood. A kingdom for those who can grow wings, blow fire, and take to the sky as dragons. After a long war, Requiem is founded and her columns rise.

Yet Requiem will never know peace so long as Raem, the cruel Demon King, still lurks in his underground realm. Forever he plagues the dragons of Requiem, sending enemies to burn their forests and topple their halls.

The dragons of Requiem have repelled attacks on their kingdom, yet now they must fly to their most dangerous battlefield. For the first time, Requiem's dragons will go underground, into the Abyss itself... and face the Demon King in darkness.

What listeners say about Requiem's Prayer (Dawn of Dragons, Book 3)

Narrator may have contributed to lousy dialog

Good story line but narrator made everyone sound whiny. Though dialog was often whiny anyway.

this story is very interesting and Arenson is great at providing vivid details (which is very important in books about dragons) The only real flaw in the book is the choice of a narrator. Arenson chose McSorley for one reason or another (prob cheapest), but McSorley is a horrible fit for a book as mature as this. McSorley makes you feel like a little kid when he reads and would be much better suited to read children books. If you want a great story this is the one, but be warned the narrator is awful, and you might want to save some money and just buy the text version.