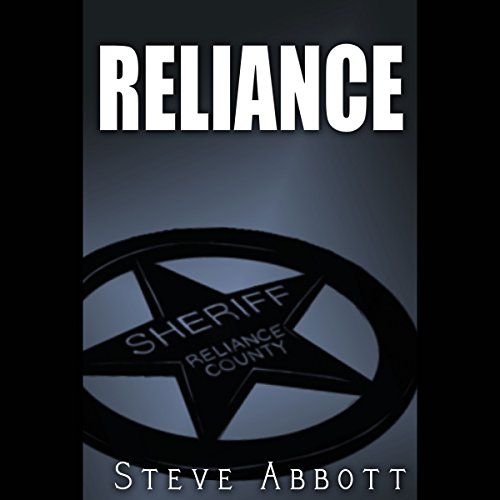 By: Steve Abbott
Narrated by: Eric Bryan Moore
Try for $0.00

For years Sheriff Tom Gillman always did what the Baron asked of him. The same as his father did before him. Now that he's grown a conscience, he's being run out of town on a rail. His last day on the job, Tom decides to rob the town bank but he's beaten to it by an out of town crew looking to make a fast and easy score.

The robbery goes wrong and becomes a hostage situation. Now, Tom must rescue the hostages and still rob the bank before the Baron's son, the new Sheriff-elect (who will stop at nothing to protect his father's money), takes control and ruins Tom's plans.

What listeners say about Reliance

Mr. Moore's voice is addictive, bringing each character to life with excellent skill and why I chose this book.

The story is quite a thrill, escalating from page one. Well written plot with quite a few twists... I would have preferred a different ending, after all that fighting towards a goal, each character had a different one, nobody wins and that is sad. I don't want to be sad when finishing a book, but that is the optimist in me I guess, looking for a glimmer of hope.

I was given this free review audiobook at my request and this review is voluntary.

Great story with bank robbers and action packed, beautifully written.
I must say the ending did take me by surprise, the narrative was excellent by Eric Bryan Moore.

A movie in your mind!

Who doesn't like an action packed story with good characters? Steve Abbott has written a contemporary bank robbery story with that old time western feel. Tom Gillman is the outgoing sheriff for Reliance County. He had no idea what his last day of office was going to be like, and sure that he did not anticipate what happened. With a family like the Baron's that runs the county, you know there is going to be conflict, power struggles and a lot of ego. Little did the Baron know that his family and his greed would turn the town upside down. This book is full of interesting characters, from the bank robbers, to the town police force, to the Baron's family, the intrigue of what will happen next and who will get away with the money keeps you listening.

When listening to a crime/thriller book, the narration is key. Eric Bryan Moore brings a grittiness and excitement to keep this book full of suspense. He has a way of reading that engages the characters so you can see the action happening. His expressive narration gives each character a distinct and identifiable voice. Give it a listen and enjoy the show.

I was hooked from the very beginning. This is like an old time shoot 'em up meets modern day. Loved the characters, though I have to say Max was probably my favorite. But, Tom and D. Coop were a close second. All 3 were just so calm and level headed for the most part, and just really interesting characters. And, I have some new one liners that I'll be using of Tom's.

This one has just enough suspense and action, nothing too graphic or unsettling, at least for me. But, enough to keep you engaged and wondering the whole time. There were a few twists that I couldn't figure out. I knew something was going to happen, but the who and the what was surprising at times. This author is new to me, but I liked the story and the writing. I didn't want it to end.

The narration was fantastic. Narrator EBM disappeared completely in this one and became each character, as usual, yet still surprises. He just never disappoints.

So Reliance isn’t my normal type of books. I am all about thrillers and suspense, psychological twists, and even some romance. Reliance was more like an old time western meets crime/action story. I was a bit surprised with how much I enjoyed it! The action in it made it so you just wanted to keep listening. I loved the humor added in! This is also my first book with the narrator Eric Bryan Moore. Moore’s narration really seemed flawless. He was clear and concise which made it easy for me to listen and follow along. The ending was great and I didn’t see it coming!

This book has a lot of action in a western style and some very funny moments. This is my first Steve Abbott's book and not the last. The story was very well written. The narration was so perfect. I really enjoyed this listening.

When you start this book hold on because your in for a ride! First the narration is spot on and just fantastic. The story is a modern take on a bank robbery with an old western flair, including the small town run by one crooked family. It has lots of sitting on the edge of your seat and plenty of action. Great book!

I loved this bank robbing thriller! This is the first modern day thriller with old time sheriff that I have listened to. I thought the narrator was spot on with all of the various characters and provided them with distinguishable voices. What an original story with great imagery. The premise of the town sheriff planning to rob a bank on his last day in office was brilliant. The narrator created the right amount of suspense, emotion and tension. I loved the characters of Max and Tom the most. Nancy, Reed, and the Baron were also interesting and complex characters, just not necessarily good people. I loved the twists and turns this book had, and thought it was very well written. I requested this review copy audiobook and have voluntarily written this review. I will definitely look for more books by this talented author and narrator.