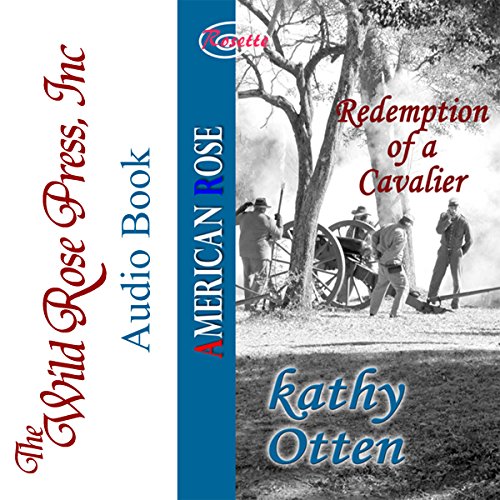 By: Kathy Otten
Narrated by: Steve Wojtas
Free with a 30-day trial

Trying to redeem himself for the death of his fiancee's brother, Wesley Cole has put himself in the front lines of every battle he's fought in the Civil War, until hours before his next major battle when he accidentally meets the one woman whose love and forgiveness can offer him peace.

What listeners say about Redemption of a Cavalier

Kathy Otten's words may as well be an actual time travel machine! You Are There; in the time period, in the situations, in the moment, AND... in the hearts and emotions of her characters!

Kathy Otten has done an amazing job with this short story. It takes place during the civil war. It is a story about love, forgiveness, and finding your way home. I would love to read a whole book on this story. Steve Wojtas narrates this story and really brings it to life. Wesley and Abby were in love before the war and to be married. Wesley was unable to save Abby's brother during a battle and blamed himself, On a chance meeting with Abby right before a battle, he learns that she does not blame him, that she still loves him and that they have a son together. While trying to save them he is shot. He is saved and Abby is there when he awakes. Wesley now just needs to forgive himself. I was given this free review copy audiobook at my request and have voluntarily left this review.

This is a short Civil War era story dealing with love, loss, and the reclaiming of ones honor. This was a very quick listen, and well worth it. I was given this free review copy audiobook at my request and I have voluntarily left this review.

Wes is a confederate soldier dealing with guilt for something that happened at the beginning of the war. In an approaching battle with the Union he sees his ex-fiancé and a source of some of his guilt. In the matter of only 20 minutes the author was able have me connection with Wes, to realize the impact on families whether northern or southern families. The desire for this couple to come together, to have feelings and cheer them on in such short time is amazing. The narrator had the perfect voice for this story...perfect emotion pacing and delivery. I was given this free review copy audiobook at my request and have voluntarily left this review.

This was a short sweet story of love and redemption. Despite its brief length, the author managed to provide enough history and detail for the listener to understand the angst and background of the characters and their story. I enjoyed the tale, and the narration was good, giving distinct voices to the handful of characters in the tale.

It is hard to try to fit a lot of emotion in to only 20 minutes. But it was done this is a pretty good listen

A story of battlefield resolution.

This short story is about a soldier, his guilt, his love and how they all heal amidst the chaos of war.

It's hard to fit a story that deals with so many emotions into a telling in under an hour and I feel this story would have done well with a bit more backstory. The character's emotions of guilt, love, healing, and abandonment of personal safety, deserve to be more deeply fleshed out in order for me as a reader, to feel invested in the momentum and make me care when a resolution occurs.

The narration was done well and was an easy listen.

I was given this book for free in exchange for this unbiased and honest review.

Finding love again in the most unexpected place...

Redemption of a Cavalier by Kathy Otten was a fun, historical listen. Though only twenty minutes long, Ms. Otten told a tale that seemed longer and was very well written. The story starts off quickly, with Wesley right at the front lines as he and unit prepare for their next battle in the Civil War. They're pushing forward and getting set into position when Wesley notices a lone house in the distance. What he finds there and what transpires is probably the most unexpected thing in the world, and it's also where Wesley finds his salvation over things that have burdened him for a long time...I won't say anymore, as I don't want to ruin this short story, but I really enjoyed this sweet, quick listen.

Steve Wojtas did an excellent job narrating this story. He was easy to understand and brought life to the characters. I'd definitely listen to more books narrated by him int he future. I was voluntarily provided this free review copy audiobook by the author, narrator, or publisher for an honest review.