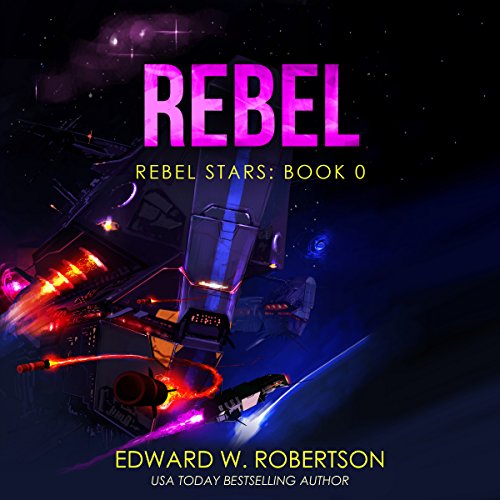 By: Edward W. Robertson
Narrated by: Ray Chase
Try for $0.00

In the early 21st century, an alien attack drove humanity to the brink of extinction. A thousand years after their defeat, the aliens haven't been seen since.

Rada Pence has spent the last three years driving carts for an independent mining crew. Most likely, that's how she'll die, too. Then, deep beneath the ice of a Neptune moon, her crew discovers a long-lost ship. If it's from Earth's first space age, it would be worth millions.

When they dig down to it, they discover it's not human - it's alien. And its secrets are worth killing for.

What listeners say about Rebel

Should have stopped with the last Breakers book

It was ok, not great, but not bad either. A transition between series... Breakers to Rebel. I think I would have been better off just letting Breakers end in the excellent way that it did. Not sure I want to continue with Rebels

I could not stop listening to it!

As my life has gotten busier over the years it has been a struggle at times to keep an interest in a story and complete it. This story flew by and it was no little sadness that I finished it. I am looking forward to reading the next book in the series.

Another great book 0 by Robertson. Makes me so glad I stumbled onto his novels and have yet to be disappointed by his work.

This world has potential and really gets my hopes up for more. However the story is quite simple and all characters seem very flat to me. Everything feels like a short story with a cool seed to a wonderful idea rather than an actual book.
The narration though... it’s horrible. He does this inward breathing voice for a few chapters and personally I just can’t make out what he say. Every other character has the rasping whisper of a 60year old drunkard. Which in a way could relate to one or two of the characters but not all. It’s also so damn slow!

For a younger author I am ever more impressed. I am surprised about Mr Robertson's depth and insights even though his no doubt public education views slip in time to time. I have been recommending him to every reader I know. If you are listening not reading, Ray Chase is equal to the task and delivers this book as good as all the others. Well done and thank you. But how do you conclude a series that is done? This one can teach you, with the potential of tidbits and treasure from the first. Breakers is not a prerequite, start here to began, with the older series later. either way this is worth acquiring.

Great start to a new series

This was the first Edward W. Robertson book I have read via Audible, and I thought the narrator Ray Chase did a great job.

No time to wax poetic, time to jump in and Read/Listen to Outlaw (next book in the series) to see what happens next!

Storyline was half decent.
Narrator turned it into crap.
It was like he was doing mellow, soothing meditation while describing killing & shooting scenes.
What a fkg joke.