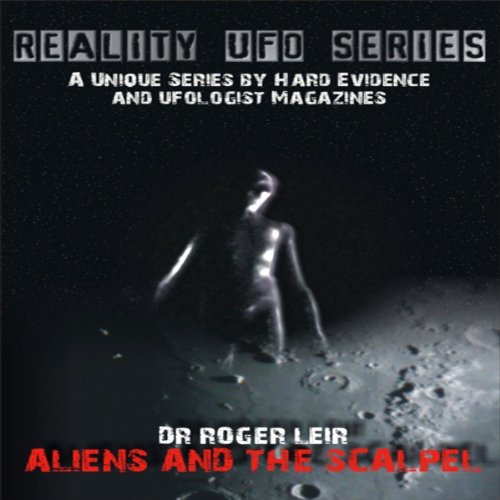 Discover the truth about alien implants.

Dr. Roger Leir has acted as chief of podiatry in many Southern California hospitals. He has headed two surgical teams that have removed several suspected alien implants from over a dozen individuals. The resulting findings have attracted worldwide attention.

Dr. Leir's work takes a serious look at the scientific and medical aspects of the alien-abduction phenomenon. It is a story of not only scientific research but how the author, who started as the consummate scientific skeptic, became thoroughly convinced that humans all over this planet are being tampered with by another intelligence.

Looked forward to a good lecture, and it would have been except for the most captivating scientific data was apparently in a power point of photo's shown during the lecture. The audio was bad couldn't hear the questions heard small talk static from audience members so I felt as if I bought this to be an outsider peering in the windows and putting my ear on the glass and not getting the full impact of the info.

If they are to do lectures they must do better than just audio tape the lecture with no kind of background for the audio scene.

Evidence of aliens if we can figure it out

The implanted objected with their coating that the author has himself removed and photographed are impressive in many ways. How should they be examined? The situaation suggests to me a similar problem to someone in the 1800s coming upon a transistor radio. There would be no examination that earth scientists could do that would help the prople of that time to understand what had been found. The author mentions many advanced methods of imaging the items but does not tell us of continuing avenues of inquiry. Of course for identifying the transistor radio you have to invent the radio and then the transistor before the transistor radio could be identified. So are there clues somewhere as to what has to be invented? This work is a place to start looking.