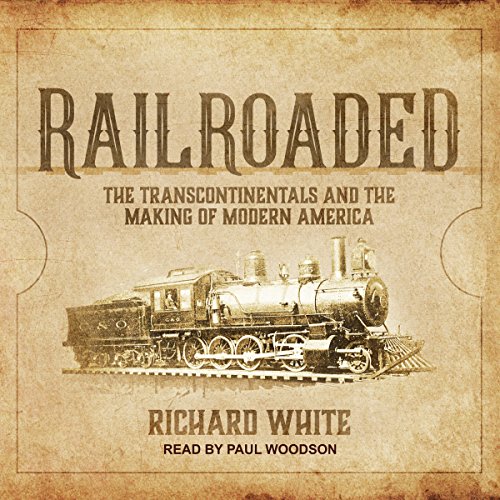 By: Richard White
Narrated by: Paul Woodson
Try for $0.00

The transcontinental railroads of the late 19th century were the first corporate behemoths. Their attempts to generate profits from proliferating debt sparked devastating panics in the US economy. Their dependence on public largess drew them into the corridors of power, initiating new forms of corruption. Their operations rearranged space and time, and remade the landscape of the West. As wheel and rail, car and coal, they opened new worlds of work and ways of life.

Their discriminatory rates sparked broad opposition and a new antimonopoly politics. With characteristic originality, range, and authority, Richard White shows the transcontinentals to be pivotal actors in the making of modern America. But the triumphal myths of the golden spike, robber barons larger than life, and an innovative capitalism all die here. Instead we have a new vision of the Gilded Age, often darkly funny, that shows history to be rooted in failure as well as success.

What listeners say about Railroaded

A different view of a famous subject

For some time now I've been fascinated by the railroads. Probably from living in CA near both Sacramento and San Francisco. I've read books about The Big Four aka The Associates and about the building of the Cental Pacific and Union Pacific, most notably the Steven Ambrose book Nothing Like It In The World. Railroaded takes an entirely different approach to the subject. The author looks not at the building of the railroad but the financing of the roads, why they were built, where and when they were built and some of their affects on our society. This is a large tome. It is both scholarly and entertaining. It will take a while to read and 23 hours to hear as an audiobook but I considered it well worth the investment of time. There is a lot to process about the men involved, the times, the birth of corporations in the U.S. and the political environment of the second half of the 19th century. I believe this book will be of interest those with a curiosity of American history, railroading, early corporate finance and the political enviornment of the time.

Very In Depth and Enlightening

For fans of both history and railroads, this is a really great book. The author goes into very fine detail regarding the Transcontinental Railroads that formed after the Civil War through the turn of the 20th Century. I learned a LOT of new things. The facts Mr. White was able to unravel from the personal correspondence of the men who formed and ran these railroad companies definitely show that reality is a lot different than high school history classes’ old narratives on these companies and their impact.

The depth and breadth of the research very effectively prove the points Mr. White is trying to convey to the reader. In some instances, the depth he goes into can bog down the overall flow of the book, but overall, I found it a very compelling story. In so many ways, there are so many parallels between Gilded Age financiers and politicians and our current day. Narration is solid overall.

Great Way to Tell the History

I live in a railroad town in East Texas. So, it was fascinating hearing the retelling of how railroads spread throughout the United States. I recommend this to anyone who has a serious or fleeting interest in railroads and how they shaped the United States. My little town in East Texas, Palestine, was heavily influenced by the railroad in the late 1800s. So, I sawed this book out to learn more about how railroads shaped towns like my own. It's well worth it and I recommend it.

Correcting the Myth of the Transcontinentals

Richard White's body of work is impressive for the depth of his research and the urgency of his analysis. Railroaded is a focused book that compliments his more broadly conceived histories of the American West, yet it poses big questions and touches on issues far beyond the scope of railroads in the late 1800s. White uses the expansion of railroads in the West to examine the corruption, incompetence, shortsightedness, and labor exploitation that have become hallmarks of corporate capitalism. The book counterbalances accepted notions of the ultimate benefits to building the transcontinentals by factoring in the myriad social, economic, and environmental costs. Ultimately, White's argument is not that the railroads shouldn't have been built or wouldn't have been realized without government intervention. He questions the moral and financial impact of how and when they were built. White's writing is direct and engaging. It can also be entertainingly caustic, especially when dealing with the ineptitude of men in power. White seems to find special joy in mocking the namesake of the university where he teaches, using archival research to expose Leland Stanford as an incompetent man who nevertheless stumbled his way into fame, fortune, and power. More than taking aim at historical myths, Railroaded is a contemplative and astute book written by one of our premier historians. Highly recommended.

A history of fraud

The book seems to be well researched and dives into great detail about all of the fraud surrounding the building of the transcontinental railroads. Throughout there is a kind of sassy, dead pan irony to the way they describe how cartoonishly corrupt the whole business was

Mr. White deomonstrates his expertise regarding the 19th Century railroads with the incredible amount of minutiae he includes in the book.

According to the author, everyone involved in the transcontinental railroads were evil, vile men. And the railroads themselves served little to no purpose. I got through four hours of this book and there is not a single positive word about anything. I mean, I get it: there was a lot of corruption and public money was not used efficiently. However, all that is in this book is tale after tale of how terrible everyone was. It is completely one-sided.

Too much detail for an audiobook

This is probably much better in print, but it’s too long and detailed to retain while listening.

Not for fans of the railroad

1st 5 minutes of the book and I've already put it away and I am going to delete it. It's so incredibly negative about the railroad making it like it never changed anything they didn't accomplish anything and they were all evil. Definitely an opinionated piece that has little to do with history and not for railroad fans.

Ambitious topic that does not deliver a good story

The book offers plenty of topics that I love. The old west, development of corporations, crooked robber barons and iconic trains that helped develop a country. I learned a few interesting things but I never made it to the end of the book. I think this is a book that you really need to want to listen to. Narration was good enough but the story was just too academic, dry and detailed for me to make it to the end. The all-encompassing story of railroads and everything associated with them is just too distracting.