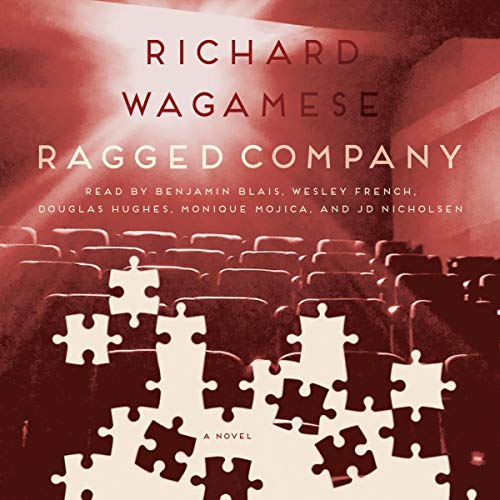 Four chronically homeless people - Amelia One Sky, Timber, Double Dick and Digger - seek refuge in a warm movie theater when a severe Arctic front descends on the city. During what is supposed to be a one-time event, this temporary refuge transfixes them. They fall in love with this new world and, once the weather clears, continue their trips to the cinema. On one of these outings they meet Granite, a jaded and lonely journalist who has turned his back on writing “the same story over and over again” in favor of the escapist qualities of film, and an unlikely friendship is struck.

A found cigarette package (contents: some unsmoked cigarettes, three $20 bills, and a lottery ticket) changes the fortune of this struggling set. The ragged company discovers they have won $13.5 million, but none of them can claim the money for lack proper identification. Enlisting the help of Granite, their lives, and fortunes, become forever changed.

Ragged Company is a journey into both the future and the past, told by an accomplished full cast which includes, in order of appearance:

“Wagamese writes with brutal clarity…. [and] finds alleviating balance through magical legend and poetic swells of sensate imagery.” (The Globe and Mail)

What listeners say about Ragged Company

The Author Once Said This Was His Favorite

At a reading of Indian Horse, another fabulous book by Richard Wagamese, he was asked which of his many novels was his favorite. He kinda quipped that maybe the one he was working on at the time, but then said, Ragged Company. Which is why I read this next, and it totally held up to the promise.
I can't quite figure out how this author is able to tell stories about such difficult situations in a way that neither sugarcoat them nor leave the reader bereft. Sad at times, yes, but somehow he always balances the tragic with the deeply beautiful; spiritual often. I will never look at a homeless person the same way.
Fantastic storytelling, more than one slice of life, with very three-dimensional characters that I fell in love with and who will follow me around for a while to come. Highly recommended!

I loved this book. The characters were so real and the dialog was great. I never wanted it to end. You will love it too