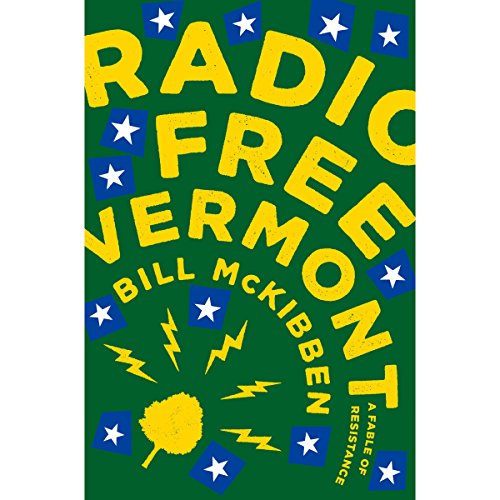 By: Bill McKibben
Narrated by: Danny Campbell
Try for $0.00

"We've got a long history of resistance in Vermont, and this book is testimony to that fact." (Bernie Sanders)

A book that's also the beginning of a movement, Bill McKibben's debut novel Radio Free Vermont follows a band of Vermont patriots who decide that their state might be better off as its own republic.

As the host of Radio Free Vermont - "underground, underpowered, and underfoot" - 72-year-old Vern Barclay is currently broadcasting from an "undisclosed and double-secret location". With the help of a young computer prodigy named Perry Alterson, Vern uses his radio show to advocate for a simple yet radical idea: an independent Vermont, one where the state secedes from the United States and operates under a free local economy. But for now, he and his radio show must remain untraceable, because in addition to being a lifelong Vermonter and concerned citizen, Vern Barclay is also a fugitive from the law.

In Radio Free Vermont, Bill McKibben entertains and expands upon an idea that's become more popular than ever - seceding from the United States. Along with Vern and Perry, McKibben imagines an eccentric group of activists who carry out their own version of guerilla warfare, which includes dismissing local middle school children early in honor of "Ethan Allen Day" and hijacking a Coors Light truck and replacing the stock with local brew. Witty, biting, and terrifyingly timely, Radio Free Vermont is Bill McKibben's fictional response to the burgeoning resistance movement.

"Is it a surprise that the debut novel from one of our best-known environmental activists focuses on grassroots resistance? In backwoods Vermont, two radicals use an underground radio show to recruit people interested in seceding from the United States. What follows is a zany, witty, and altogether timely imagination of modern resistors." (The Millions)

"rollicking…With a playful and quick-moving plot that belies the seriousness of the book’s environmental and political message, McKibben’s stirring call for recognizing the value and power of smallness in a globalized world makes for a vital and relevant fable." (Publishers Weekly)

Small is Best without the BIG ego...

Vermont proves it with their Town Meetings and mutually respectful dialogues for making decisions. A parable for modern times - that means, as with all fables, any time.

Peaceful, fun ways to RESIST! whatever you choose to resist.

Couldn't 'put it down'. It was read in two days - unusual for me, and well worth it.

A story without a purpose

Rambling folksy nonsense that did not deserve its literary accolades. Do yourself a favor a pick another story.

I have listened to hundreds and hundreds of audiobooks….this one is now in my top 5. If you’ve ever been to Vermont, this story will remind you of the best parts of it (at least it did for me). Thank you all!

This was a short but fun listen. Definitely enjoyed. I would recommend this one to others looking for something pretty light.

A very enjoyable fable by noted environmentalist Bill McKibben, Radio Free Vermont describe a grassroots effort to promote Vermont values in response to encroaching “bigness”. At times it shows that this is Bill’s first effort at writing a novel, but it still works and the narration by Danny Campbell does a great job conveying the required folksiness. Strongly recommended for Green Mountain or Blue State readers/listeners.

Well done Bill... Enjoyed it thoroughly. I feel as though I need to visit Vermont very soon.