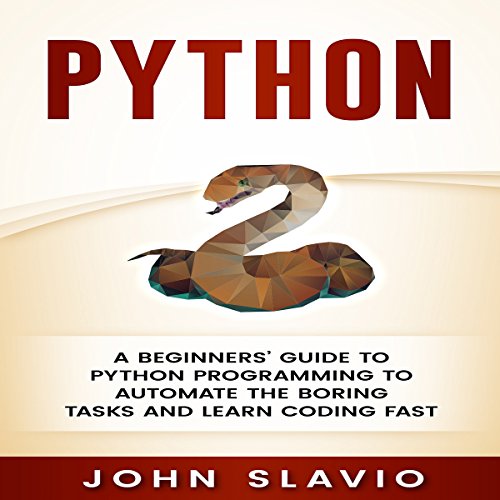 Python: A Beginners’ Guide to Python Programming to Automate the Boring Tasks and Learn Coding Fast

Do you want to learn programming, but you are too intimidated by the complexity?

Programming languages are made to make the human life better than before. These languages help in making programs which increase the overall productivity, communication, and efficiency of the work. Out of so many programming languages to choose from, python is one of the most loved programming languages among computer geeks. This is because python is one of those rare languages that is both simple and powerful. Python has everything that you may require to make a new program. If you will see someone writing a program in python, you will be really surprised to see how easy it is in python to find the solution for a problem.

In simple words, python is an open source, a high-level programming language developed by Guido van Rossum in 1980s. This language is presently administered by Python Software Foundation.

Python has proven its worth in all these years for both business and industrial use. Unlike other languages, it didn’t go obsolete and in fact, with time, the use of Python has increased. Python is broadly used in making web applications, GUIs (Graphic user interface), games, etc., and writing and reading the codes in python is as simple as reading regular English sentences. The program written in python is required to be processed before running as they are not written in machine readable language. Once you will learn the basics of python (as you are a beginner), you will find it really easy to move on towards the advanced features that python offers to programmers.

What listeners say about Python: A Beginners’ Guide to Python Programming to Automate the Boring Tasks and Learn Coding Fast

The book is narrated by a woman who starts off by listing the chapters of the book and what they will go over. Explains what Python is, what it does, how it works, good for beginners and easy to understand. A nice slow pace of speaking and clear. I liked that it gave exercises was helpful for me to learn as I am a tactile learner. About an hour and a half long book.

The narrator was very clear.

The author seems to be very patient, he shows that by the way, he has laid out the information in this book, for he goes out of the way to make sure you understand the contents of the book.
He helps you learn how to write, run and save your programs.

The author goes as far as to giving you some exercises to solve, to get you more accustomed to this new world of Python programming.

This book is well written and the narrator was very clear and spoke at just the right pace.

The Python: An Apprentices Manual for Python Programming to robotize the exhausting assignments and catch on quickly is a superb book for fledglings and school understudies. The creator has secured all the center ideas in a simple to reasonable way.

In the event that you read the book, you will know why the Python book is well known including remarkable highlights of the programming dialect. The creator has analyzed the means required to introduce Python on different stages, for example, Windows, Linux, Macintosh OS X. You will figure out how to make utilization of Translator incite, editorial manager and source document.

In the area subtitled Python Nuts and bolts for Learners, the creator has analyzed the ideas, for example, remarks, exacting constants, cites, the arrangement technique notwithstanding escape groupings. In addition, the book gives few example projects to you to rehearse.