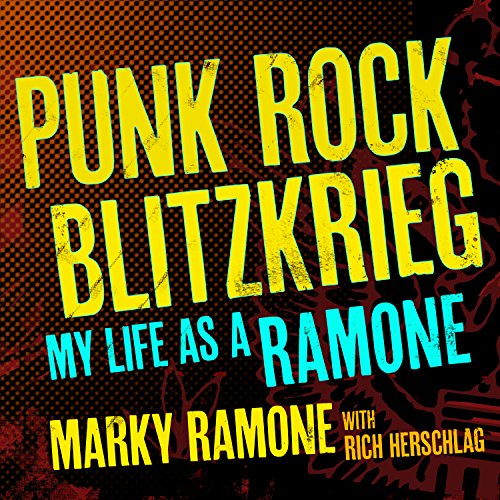 Rolling Stone ranked the Ramones at #26 on its list of the "100 Greatest Artists of All Time". They received a Grammy Lifetime Achievement Award in 2011 and were inducted into the Rock and Roll Hall of Fame in 2002. Marky Ramone played a major part in this success - his "blitzkrieg" style of drumming drove the sound the Ramones pioneered. Now fans can get the inside story.

Having outlived his bandmates, Marky is the only person who can share the secrets and stories of the Ramones' improbable rise from obtuse beginnings to induction into the Rock and Roll Hall of Fame. But it wasn't all good times and hit songs, and Marky doesn't shy away from discussing his own struggles.

From the cult film Rock 'n' Roll High School through "I Wanna Be Sedated" through his own struggle with alcoholism, Marky Ramone sets the record straight, painting an unflinching picture of the dysfunction behind the band that changed a generation.

Punk Rock Blitzkrieg is both a cultural history of punk and a stirring story that millions of fans have been waiting for.

"Fans of punk and new wave will be fascinated by [the] details." (Booklist)

Would you listen to Punk Rock Blitzkrieg again? Why?

Yes. Great background into the history of Punk legends Ramones. Like any history story told well, there's typically more to glean on a second pass.

What was one of the most memorable moments of Punk Rock Blitzkrieg?

Realizing "End Of The Century" was Spectorized. I thought I knew my album history, but some how managed to miss the fact Phil Spector produced End of The Century. I stopped the book as soon as I learned this fact, and immediately listened to the album again, and heard the tracks with new ears. As a matter of fact, learning the stories behind many of the Ramones songs and Markey's previous bands was a huge distraction --- I found myself constantly switching from the book to my long punk playlist to listen to all the songs mentioned with a brand new appreciation. It was a very cool experience for a lifelong fan.

Have you listened to any of Corey M. Snow’s other performances before? How does this one compare?

This was my first listen with Mr. Snow. He did a great job of projecting Marky's tone and speech pattern. It's clear Mr. Snow "got in character" to deliver the narration, and it worked great.

"Sedated" What else would you call it?

Was a clear reminder of to not pass up the opportunity catch your favorite bands when they are around -- there's no guarantee they'll pass by again.

Ramones fan? Get this book!

A must listen for any Ramones fan! A true insiders look at the inner working of the machine called Ramones. A fun listen. Sad. Sweet. Raw. Upsetting. Triumphant. A great book about a great band, warts and all.

I was finally able to make connections about rock culture that I didn't make before. Very well written. A story rich with history and life lessons. Gabba Gabba Hey!

A must read for any punk or rock fan

Great behind the scenes look at one of the greatest bands ever. Marky tells a honest, and fun recollection of the birth of Punk!

Great book for any fan of the Ramones or of punk rock for that matter. a truly Rock-n-Roll saga of a band of brothers who fought their way to stardom but never really made it. The rest of the rock world was heavily influenced by the Ramones and this book explains how from Marky's perspective.

it reads like a Ramones song play, simple, too the point, and a whole lot of fun.

hey its Marky’s view which is different from other people’s views. if you are a Ramones fan, then why not read the other books from the band and people who were there and enjoy a glimpse into the world of the Ramones?

Wasn't a big fan of the voice reading the book but I've heard worse! The book told a lot that I never knew about the Ramones. The book was tolerable until he got to the Ramones stories. Overall, if you're a punk fan, you'll probably dig it.

This book was the fuller to everything I didnt know even after being a fan for so long. Thank you Marky

Plus, Marky pulls the curtain back on the Ramones, with a legit "behind the scenes" look into the inner machinations of the band that invented punk and spawned a rock + roll revolution.

A must-read for a Ramones fan or punk rock devotee!