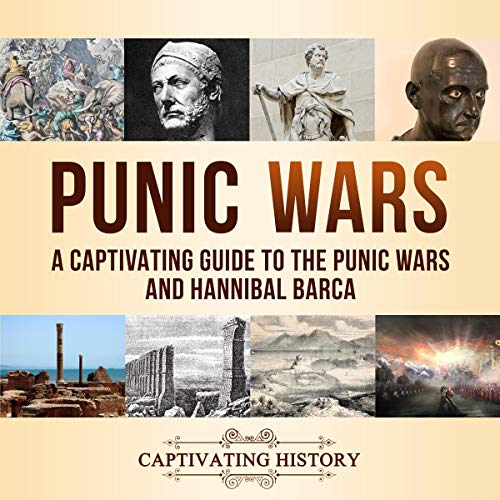 If you want to discover the captivating history of the Punic Wars, then pay attention...

Some of the topics covered in part one of this book include:

Some of the topics covered in part two of this book include:

So, if you want to learn more about the Punic Wars and Hannibal Barca, scroll up and click the "buy now" button!

What listeners say about Punic Wars

Great audiobook describes how and why Carthage a mercantile empire fall to the more dynamic and militaristic Romans.

For people who love ancient warfare

If you are looking for an easy but informed audiobook about the punic wars, then this audiobook is for you. And what an astonishing story ...

I enjoyed this book

An amazing audiobook that searches the often-ignored political characters of the punic wars. Highly commended to anyone with an interest in history or/and in war and leadership.

I am a huge ancient history fan and I have enjoyed this audiobook and I would suggest anyone interested in this period.

This is a very accurate and well-written history of all three Punic wars. It helps that the underlying legend matter, especially the story of the first few years of Hannibal's intrusion of Italy, is interesting and shocking.

History of the Punic Wars

I loved this audiobook a lot for doing work and learning history at the same time. The storyteller is very good but the survey is a bit dull.

This tells what happened

If you require an audiobook that clearly describes what happened and why in a well-written simple to understand style, then this audiobook is what you're looking for.

Is it not a strange thing when we understand the paucity of stuff about, arguably, the greatest battle of the ancient world that we have only one side's account because the victors, the Romans, killed everything concerning the Carthaginians after their loss in the third war.

Fantastic audiobook. Well written and clear to understand. This audiobook will stay as my reference for Punic wars. Though I wanted more the previous title "The Punic Wars".

Captivating History is an able historian and this book is a very exciting guide.....visually very rich and packed with fascinating characters.... must audio for all history buffs.

I got the audiobook complete enough in describing the Punic wars. I can now say that I have a grip on what they were all about and why they are important in the history of the world.