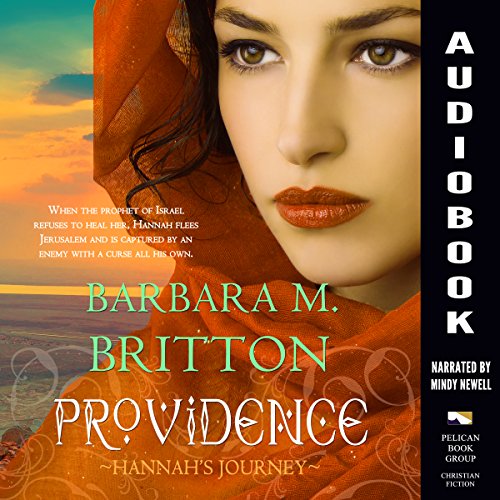 By: Barbara M. Britton
Narrated by: Mindy Newell
Try for $0.00

As the sole daughter of the chief priest, Hannah is publicly shamed when the prophet of Israel refuses to heal her. Determined to restore her family's honor, she escapes Jerusalem in hopes of finding the prophet and convincing him to restore her deformities. Gilead, a young Hebrew guard sympathetic to her plight, willingly accompanies her. On their way, they are captured by a band of raiders and Hannah is forced to serve in the household of the commander of the Aramean army, an officer who is in need of healing himself. Meanwhile, Gilead is being used as sword practice for the Aramean soldiers. Hannah must act fast to save Gilead and herself, but survival will mean coaxing the prophet of Israel to heal an enemy commander.

What listeners say about Providence: Hannah's Journey (Tribes of Israel)

The book captured the essence of God’s grace for all people. Good job and and keep writing

Seldom to I return an audiobook. I persevered as far as chapter 3 and couldn’t listen to another chapter. The narrator read so fast and her inflection and tone was so annoying I couldn’t pay attention to the story. I had to return it. I’m grateful because I used a credit for a book just shy of 6 hours that I absolutely couldn’t listen too.

I understand that this book was written with a youth audience in mind, but it feels a little shallow. The plot is great, but it just feels like it could be fleshed out a lot more. The progression of events seemed rushed and confusing, and at many points I wondered if this was really a poorly edited abridgement, even though it says it is unabridged. The narrator reads way too fast and does not portray feelings or the events of the story appropriately. Her inflection is too robotic and quick to allow the story to move the reader along with the twists and turns. It ends up feeling like a 9th grade oral report. At one point I realized the narrator sounded like a female version of Doug the Dog..at that point I lost connection completely...Doug is adorable but wholly inappropriate for the gravity of a Biblical Fiction/romance. I hate to give it a low rating, because I did enjoy the story. But I would recommend it for young readers and...maybe just read the book...

Usually audible books feel like theater and it is easy to get wrapped up in the story and forget I am listening to a book. Unfortunately that is not the case with this narrator. I am constantly aware that I am being read to. The story is one I am familiar with and enjoy, I own it on my Kindle. However this narrator seems to think of narration as a job, not an opportunity to perform. There is little difference between the character voices/emotions and the narrative. Overall the narrator sounds bored and wishing to be doing almost anything else. To make me excited enough about the story to get lost in it, the narrator must also portray excitement about the story. With the right narrator, this could have been a very enjoyable audiobook. I will be very cautious about purchasing any other books that have this narrator.