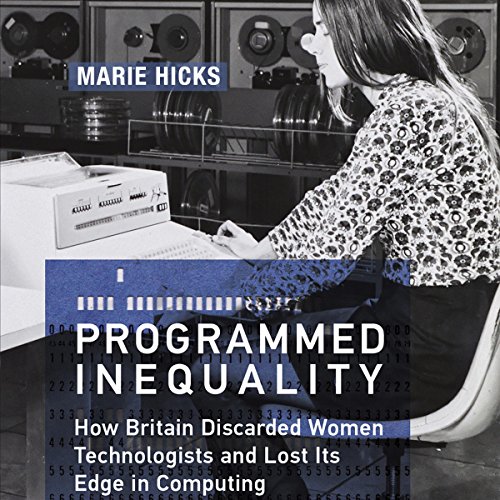 Programmed Inequality: How Britain Discarded Women Technologists and Lost Its Edge in Computing

By: Marie Hicks
Narrated by: Becky White
Try for $0.00

In 1944, Britain led the world in electronic computing. By 1974, the British computer industry was all but extinct. What happened in the intervening 30 years holds lessons for all postindustrial superpowers. As Britain struggled to use technology to retain its global power, the nation's inability to manage its technical labor force hobbled its transition into the information age.

In Programmed Inequality, Marie Hicks explores the story of labor feminization and gendered technocracy that undercut British efforts to computerize. That failure sprang from the government's systematic neglect of its largest trained technical workforce, simply because they were women. Women were a hidden engine of growth in high technology from World War II to the 1960s. As computing experienced a gender flip, becoming male-identified in the 1960s and 1970s, labor problems grew into structural ones, and gender discrimination caused the nation's largest computer user - the civil service and sprawling public sector - to make decisions that were disastrous for the British computer industry and the nation as a whole.

Hicks explains why, even today, possessing technical skill is not enough to ensure that women will rise to the top in science and technology fields. Programmed Inequality shows how the disappearance of women from the field had grave macroeconomic consequences for Britain, and why the United States risks repeating those errors in the 21st century.

Published by The MIT Press.

What listeners say about Programmed Inequality: How Britain Discarded Women Technologists and Lost Its Edge in Computing

What made the experience of listening to Programmed Inequality: How Britain Discarded Women Technologists and Lost Its Edge in Computing the most enjoyable?

It a well researched look at the Post War UK Tech world....... Although the USA suffers from the same lack of diversity, Silicon Valley is still in a modern Renaissance in Tech rather then Art.So I am sympathetic to the premise of this book but it is too simplistic to blame the lack of women in the Tech world for the British decline in this Universe.The U.S had strong Government support and large movements of skilled workers to infuse our Tech industry with fresh blood and raw talent.This was lacking in Post-War England.There is no question that more women are needed in not only the Tech World but all industries across the planet to insure continued growth in GDP. I believe this is a work that was looking to prove a premise, it is my belief that nothing could have stopped the juggernaut of American dominance after the World War ........The improper use of British women as cited by the author was a factor in the decline of the British Tech sector but it is too simplistic to put that cause as the most important factor.The unique symbiosis between the Government,Military and the private sector helped energize our Tech industry in that era.The destruction of The War put England at a huge disadvantage that it could not overcome regardless of the amount of women employed in the industry.

She did her best with the material she had to work with.

No...... it is not that entertaining you need time to absorb the material.

A look at Gender in the Workplace

I have recently read a number of books along this topic line such as “Hidden Figures, Rocket Girl, etc.”. This book deals with the United Kingdom. According to Hicks Britain was the leader in electronics field at the end of World War II. The author chronological reveals the history from Bletchley Park to the collapse of the UK-sourced IT industry in the late 1970s. Hicks also details the rigid Civil Service attitudes and strictures to constrain the role of women in the workplace.

The book is well written and meticulously researched. The author spent many hours in the British archives. Hicks displays scholarship in her excellent use of original sources and extensive supporting notes and references. Hicks delves deep into the gender discrimination in the UK. The writing style is easy to read but is very academic. I found this book fascinating. It reinforces the need and benefits of a diversified work force. Marie Hicks is associate professor of history at Illinois Institution of Technology.

The book is eleven hours. Becky White does a good job narrating the book. White is a voice-over artist and audiobook narrator.

Not sure about the 'Cause and Effect'

Earlier reviews describe the content well - I shall not re-plough the field. I had the feeling, also expressed by another reviewer, that the goal of the book was to prove the premise. It is indeed meticulously researched and documents, almost obsessively, the evolution and eventual decay of the British computer industry.
I feel, however, that it cheats, by essentially ignoring the inability or, more likely, unwillingness of the UK to change the rigid, long-established and clearly defined gender, class and economic structure at the end of the Second World War. This obviously pervaded all aspects of British life and all segments of the economy (especially the Civil Service), being set aside only in times of extreme crisis such as WWII. Once peace was restored, so was the status quo.
My sense is that the demise of the industry under study was as much the result of a concentration on mainframe computing, rather than the adoption of a distributed approach.
Becky White's narration style perfectly fits the academic style of the book and conveys the various tones and messages most effectively.

'Programmed Inequality' covers the history of computers in Britain, from Bletchley Park in World War Two through to the 1970's. It focuses strongly on British Tabulating Machine Company (BTM) and International Computers and Tabulators (ICT). It's main premise is that women did a large amount of the programming and computing work throughout many of those decades, but have effectively been ignored and forgotten by history, or 'downgraded' to just data entry type work rather than true programming and development. The women were also regularly passed over for promotion, or forced to train their male replacement, due to an expectation that once they marry they will leave the workforce and thus they shouldn't be invested in. The book also looks at gender relations in relation to the workplace in general, covering the union movements and fight for equal pay and recognition. It touches on the wider events of the time, but mainly focuses in the impacts on hte computing industry.

For the book subtitle of "How Britain Discarded Women Technologists and Lost Its Edge in Computing" it very much proves the first half. The second half is harder to prove and somewhere that I felt the book didn't over as well. It is true that the British computing industry suffered, and that ICT has issues - this is presented well and clearly. It is likely very true that if BTM and ICT has capitalised on their female workforce, rather than overlooking them, they would have been much stronger. What is missing from the equation is showing a nation or company that did capitalise on that and thus got ahead. To say the British lost out by discarding women is true, but so did everyone else. Britain didn't lose to the Americans etc because America used women but Britain didn't. The focus on the scope of Britain only means that there is no wider view of looking at places that did it better and succeeded because of it. That means that while it is likely that not discarding women might have saved the British computer industry, it is hard to prove as we don't have a counter case to actually compare against.

The writing itself was okay, although rather academic and dry. I've read (listened to) may university Press books and they range from very academic in writing to some very free flowing and conversational books. This is very much on the dry academic end of writing.

Narration by Becky White was good. Well paced and easy to listening to. She took a text that was rather dry in style and made it engaging and interesting.

This story of when--and why--computing flipped from being a feminized field to being a male-dominated one is essential knowledge for everyone working in the field today. I had no idea how much this change had to do with power rather than skill. Women in computing today face similar obstacles. The great part about this book is that it makes you think about the structures that have created this situation, and it shows how women have been there from the beginning.

What are women good for? They should be wives and mothers and their pay in Britain was held down so they would rely on a husband. This book could for some be viewed as dry. But the problem is this was a huge problem and required lots of explanation. The women not only programmed the computing machines but also repaired them. Then they were forced to train the men who would be their managers. This was a pathetic system that shows how men do not always know best.

This book seems to have lots of info and historical references but either the writing or my inability at the time to take in the info has caused me to put this book on hold. I got two hours into the book and still felt that the point had not been expressed fully or substantiated. I listen to a lot of books and even have the ability to listen at work, I rarely have difficulty following a book like I did this one. I will revisited this book later and then amend my review accordingly.

This is the first book I’ve read/listened to by this author.

This is the first book I’ve listened to by this narrator and I would listen to another. She read the content well.

loved the book but the performance was lacklustre. mispronounced terminology and a clear lack of knowledge of British place names or scholar's surnames. glad to see scholarly books being recorded, but more guidance should be available to voice actors in this space