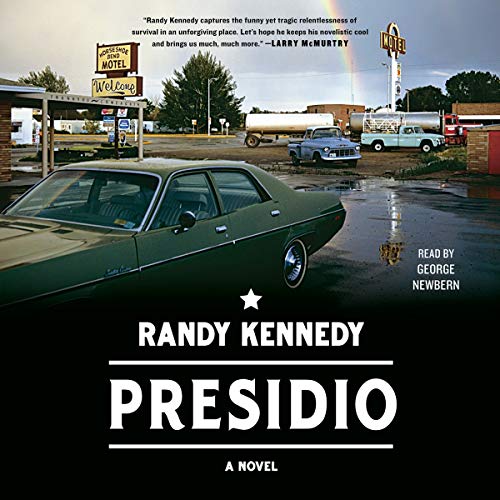 By: Randy Kennedy
Narrated by: George Newbern
Try for $0.00

Set in the 1970s in the vast and arid landscape of the Texas panhandle, this darkly comic and stunningly mature literary debut tells the story of a car thief and his brother who set out to recover some stolen money and inadvertently kidnap a Mennonite girl who has her own reasons for being on the run.

Troy Falconer returns home, after years of working as a solitary car thief, to help his younger brother, Harlan, search for his wife, who has run away with the little money he had. When they steal a station wagon for the journey, the brothers accidentally kidnap Martha Zacharias, a Mennonite girl asleep in the back of the car. Martha turns out to be a stubborn survivor who refuses to be sent home, so together these unlikely road companions attempt to escape across the Mexican border, pursued by the police and Martha’s vengeful father.

The story is told partly through Troy’s journal, in which he chronicles his encounters with con artists, down-and-outers, and roadside philosophers, people looking for fast money, human connection, or a home long since vanished. The journal details a breakdown that has left Troy unable to function in conventional society; he is reduced to haunting motels, stealing from men roughly his size, living with their possessions in order to have none of his own, and all but disappearing into their identities.

With an addictive plot about a kidnapped child, gorgeously written scenes that probe the soul of the American West, and an austere landscape as real as any character, Presidio packs a powerful punch of anomie, dark humor, pathos, and suspense.

What listeners say about Presidio

A good story line. ends with a lot of loose ends. well written and read.

I raised my family in the small town of Plains, Texas, and I felt as though I were back on the Llano Estacado. The characters are rich and believable & the plot is like no other. Congratulations, Mr. Kennedy. The book is wonderful. Mary Jane Norman McCord

Poor editing of re-recordings was distracting throughout, but particularly in the beginning. The story itself was good; perhaps if I read it rather than listened to it, it would’ve been great.

This was an ok story that was just kind of unsatisfying. The characters were ok. The story was ok. The narration was ok. If you’re looking for an ok listen, this is your book. Ok?