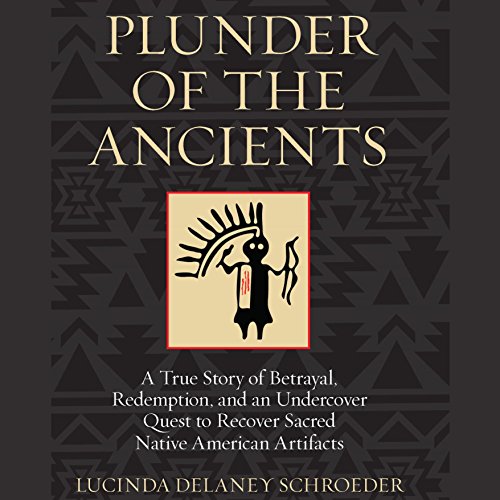 Plunder of the Ancients

By: Lucinda Delaney Schroeder
Narrated by: Susan Larkin
Try for $0.00

In the heart of Indian country in the American west, clandestine criminals were profiting greatly from the sale of sacred Native American artifacts stolen from tribal lands. These artifacts were so ancient they had been used since the migration of the first Americans into North America some 15,000 years ago. In the year 1998, the illegal trafficking of these artifacts peaked in Santa Fe, New Mexico. At the same time, the tribes and pueblos in New Mexico and Arizona fell into crisis because many of their sacred ceremonies couldn't be conducted. Without their ceremonial objects, sickness and deep depression became prevalent and the spiritual leaders became desperate to get their divine artifacts back to restore the health, happiness, and balance of their people.

Plunder of the Ancients is a rare look inside an actual undercover investigation in which special agent Lucinda Schroeder reveals the details of her case in which she was assigned to expose the Santa Fean Indian Art thieves and dealers, who out of unmitigated greed, were exploiting sacred artifacts for huge sums of money. Her final task was to bring the criminals to justice; recover the sacred artifacts and return them to their rightful people. But all did not go well for Schroeder. While her cover was airtight, she faced betrayal from people she regarded beyond reproach. Her additional challenge then became to find out who was so determined to undermine and even destroy her mission of restoring the spiritual lives of Native Americans who were suffering.

Plunder of the Ancients takes listeners along on a dangerous and unprecedented assignment as Schroeder battles betrayal, evil spirits, and shape shifters for a cause she strongly believes in. This is a true story that reads like a Tony Hillerman mystery.

What listeners say about Plunder of the Ancients

The book starts and ends with the things a reader might be most interested in: explanations and a little bit of mystery for that information not for public consumption. But the middle of the book gets really bogged down. This would be a fascinating podcast, mini-series, magazine article, or longer book. But where it rests now: solely from the FBI agents POV, it get thin on the kind of details that move a story forward, and seems to want to grind some axes. Overall, interesting and exceptional case work, but not the most engaging read.

Story makes up for lackluster narration

This book sits at that incredibly rare intersection of deep expertise and excellent storytelling. The author's obvious care for and knowledge of subject of Native American belief, her scathing remarks on the good old boys club of the FBI, and her general badassery made this book impossible to put down from beginning to end. In truth, I've never been so riveted by a non-fiction book -- something the narrator, with her choppy cadence and terrible pronunciations, did her best to distract from. In short, I would highly recommend the book to just about anyone, albeit unfortunately in hard copy.

certainly not an, on the edge of your seat, bio

struggled to get through it.
certainly not as, on the edge of your seat reading, as A Hunt For Justice, was, and lacking enthusiasm during the narrative of this book. poor effort. Therese Plummer had enthusiasm.