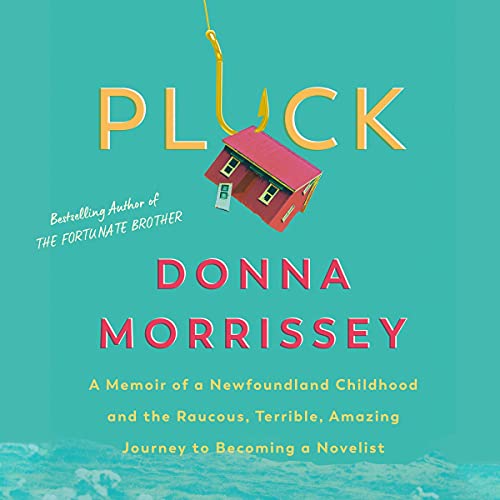 A deeply personal account of love's restorative ability as it leads renowned novelist Donna Morrissey through mental illness, family death, and despair to becoming a writer - told with charm and inimitable humor.

When Donna Morrissey left the only home she had ever known, an isolated Newfoundland settlement, at age 16, she was ready for adventure. She had grown up without television or telephones but had absorbed the tragic stories and comic yarns of her close-knit family and community. The death of her infant brother marked the family, and years later, Morrissey suffers devastating guilt about the accidental death of her teenage brother, whom she'd enticed to join her in the oilfields. Her misery was compounded by her own misdiagnosis of a terminal illness, all of which contributed to crippling anxiety and an actual diagnosis of PTSD. Many of those events and themes would eventually be transformed and recast as fictional gold in Morrissey's novels.

In another writer's hands, Morrissey's account of her personal story could easily be a tragedy. Instead, she combines darkness and light, levity and sadness into her tale, as her indomitable spirit and humor sustain her. Morrissey's path takes her from the drudgery of being a grocery clerk (who occasionally enlivens her shift with recreational drugs) to western oilfields, to marriage and divorce and working in a fish-processing plant to support herself and her two young children. Throughout her struggles, she nourishes a love of learning and language.

Morrissey layers her account of her life with stories of those who came before her, a breed rarely seen in the modern world. It centers around iron-willed women: mothers and daughters, wives, sisters, teachers and mentors who find the support, the wind for their wings, outside the bounds given to them by nature. And it is a mysterious older woman she meets in Halifax who eventually unleashes the writer that Morrissey is destined to become.

An inspiring and insightful memoir, Pluck illustrates that even when you find yourself unravelling, you can find a way to spin the yarns that will save you - and delight listeners everywhere.

“I have heard many tell and sing about the challenges and blessings of the hard and happy times in outport Newfoundland, but never have I felt such a connection to it in story or song as in Donna Morrissey’s Pluck. I feel like I have walked the hills with her in an extraordinary childhood filled with death and dancing, where nothing was so fearsome or fascinating as ‘away’. This is a song of a story and I would love an encore.” (Alan Doyle, musician, actor, and best-selling author of All Together Now)

“The ups and downs of Donna Morrissey’s life would be enough to give anyone the bends. Pluck is a terrific read, a tale that will make you laugh and cry. Take the plunge.” (Mark Critch, best-selling author of An Embarrassment of Critch’s and Son of a Critch)

"In Pluck, Donna Morrissey turns her award-winning storytelling skills to a compelling, compassionate and often humorous account of growing up with her big, turbulent, loving family in outport Newfoundland. This deeply moving memoir is the story of a writer finding her way and her voice. But more so, it's a powerful reflection on the experiences of tragedy and redemption, and the inextricably linked states of loss and love." (Pauline Dakin, best-selling author of Run, Hide, Repeat)

What listeners say about Pluck