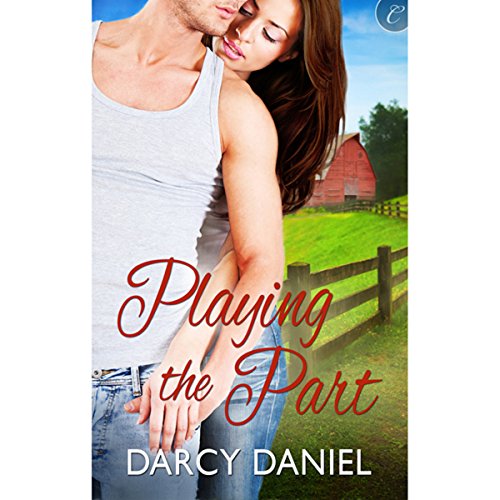 By: Darcy Daniel
Narrated by: Eva Kaminsky
Try for $0.00

Anthea Cane is a successful actress - well, action star. Her films are mostly about how hot she looks silhouetted by fiery explosions. But Anthea is determined to prove she's more than just a body. With the role of a lifetime up for grabs - a serious adaptation of her favorite novel - Anthea sets off to her small hometown in the name of research.

Cole Daniel is a blind farmer with no patience for divas, especially one who mercilessly teased him as a young boy. When Anthea shows up using a fake name and pestering him into letting her stay, he can't pass up the opportunity to torment her just a little.

But Anthea won't let the stubborn farmer deter her from her goal, even if he is hotter than any man she's ever met. Cole finds his form of payback less than satisfying when Anthea keeps turning the tables on him, proving her mettle and gaining his respect. Will Anthea's research land her a man, as well as the part?

What listeners say about Playing the Part

As soon as I read the blurb stating that the hero was blind I knew I had to get this book. It was different to any other contemporary romance book I've ever read or listened to. It's a sweet romantic story that was so well written. Both the hero and the heroine had gone through trauma and sadness and it includes enough details to make it bearable.

I loved loved loved this book so much!!! I spent seven hours of my day listening to the story from beginning to end. I just could not put it down. The way the romance slowly develops is amazing. The best first kiss scene by far. EVER! I just loved Cole! I don't want to give spoilers because every little surprise this story has is worth discovering on your own. I'm just amazed that this is the first and only book by Darcy Daniel. I sure hope she writes many many more.

Narration: Eva Kaminsky did a wonderful job with this story. It was set in Australia and I could tell that the accent was different. Each character had a different voice and she added the extra sweetness and intensity that a story about a first powerful love deserves. It's definitely worth a credit or even full price!!

STORY (contemporary romance) - This story is set in present day Australia. The female lead (Anthea) is a successful actress and the male lead (Cole) is a blind farmer. She comes to his farm so she can prepare to audition for a role as a farmer's wife. She lies about who she is because (a) he's blind and won't know and (b) she tormented him in school as a child because he was a poor farm boy. But he's also deceiving her because he knows who she really is. Anyway, it's complicated, but they begin a relationship.

And what a relationship it is!! Cole has never had a girlfriend before because he never leaves his farm, but he listens to romance novels so he knows how women like to be loved and treated. He's so gentle and sweet and romantic I think I'm in love with him! The only reason I didn't rate the book a five is because I wasn't crazy about the first part. You have to wait for it a little, but it's worth it in the end.

PERFORMANCE - The narrator has a lovely voice and does a good job. Her Australian accent is refreshingly different.

OVERALL (actual rating 4.5) - There's a couple pretty sexy scenes, but they're very sweet and not overly explicit. I don't recall any bad language. This is definitely a feel-good book for those who enjoy sweet romances with awesome endings.

I was also hesitant in getting this book. Just didn't know what to expect. However, I took a chance and I'm so glad I did. This was one of the best books I have ever listened to. So sweet and so romantic that it actually was HOT!!! I can't believe this is Darcy Daniel's only audiobook. I hope there will be more. I do wish Cole could have made a little more effort in the end to get to Atheia but not going to dwell on that cuz everything else was so so good!!! Give it a chance. Such a good story! Oh, and Eva Kaminsky was unbelievable great! Loved every minute!!!!

Yes. Lots of appeal Great to have a novel with all the bells and whistles

What was one of the most memorable moments of Playing the Part?

All came together amazingly well. The scene with the dam towards the end highly emotionally charged. One could feel the scene and the despair.

Took a while to get used to the not so good"australian" accent, but once over the changeable Accent. I was thoroughly absorbed in the great story line.

Both laughed and cried, author has a way of drawing in the reader as if you are a part of what is happening.

This was a wonderful book filled with amusing moments along with moving moments. The main characters both have things from their pasts they need to overcome and the writer does a great job of slowly healing them both. I love stories set in small country towns and this once certainly didn’t disappoint.

Anthea is different than most heroines simply because she’s a little difficult to empathise with at the start. She’s a bit of a spoiled brat, but once she starts her research on Cole’s farm, she changes into a really great person who I could get behind and barrack for.

Cole is one of the best hero’s I’ve ever encountered in a romance. He’s flawed in more way than one, but he doesn’t let his physical disability stop him from doing what he needs to do to earn a living. I thought a blind hero might make me want to feel sorry for him, but that never happened. He’s strong and independent and the writer has done a great job of making me want him for myself!

I would love to see this adapted for the cinema, it would make an excellent movie.

Overall, I highly recommend this book and am looking forward to the next one by Darcy Daniel.

Good story about a blind farmer and a successful actress who will be auditioning for a role of a lifetime, a serious adaptation of her favorite novel "The Farmer's Wife". Anthea sets off to her small hometown in the name of research. Anthea shows up on Cole's doorstep, well, in this case his field using a fake name and pestering him into letting her stay. For reasons I don't want to give away, he uses that as a chance to get back at her. I enjoyed the story but I think it needed an epilogue or an additional chapter to tie up some loose ends. I absolutely LOVED the narrator! Loved the accent!

wonderful refreshing story. One of a kind for sure. People are buying this story as the character is blind and a farmer. You will not be disappointed if you are looking for a good core romance story.

same as headline. This could very well be a base for a movie script

I do not like Eva Kaminsky as she has a up lift at end of sentences. BUT,she did a great job on this Aussie accent. I am not an Aussie, but have visited down under 5 times. Eva is spot on. Almost like an Aussie that reads with an American accent on the Bella Andrea, Sullivan series. Eva reads this story and all the Bella Andrea Sullivan brother stories. Sullivan brother are Oh so sexy, you buy them even with this reader.

Omg. hilarious. I haven't had so much fun listening in a long time. Where are definitely parts that get a bit serious- but for the most part- just plain old fun! We need more!

This book is well worth the credit for a nice relaxing summer listen. It would be a great listen for a weekend at the beach!!!!

I thought this was a well written story with well developed characters. I LOVED Cole! Hot, sexy and a personality to match. Anthea was a good character too although she's portrayed as being selfish and conceited, but we don't really ever see that side of her expect for a few minutes in the beginning and that isn't too memorable.

As far as the narration went, I wish that a real Australian would have narrated this book. It would have made it even better although Eva Kaminsky's accent grows on you after a while. It the beginning, I thought that maybe she was talking like that to show a difference between the voices. I finally got used to it and I think that the accent actually got better over time.

One of the bigger issues I had with the narration was that if Anthea left Australia and moved to L.A. as a child, she probably would have lost her accent completely. The narrator could have read her voice without the Australian accent and it would have been just as good.

Overall, I really enjoyed this book and I'll definitely listen to it again.

A GREAT listen. I enjoyed this book from start to finish and hated to hit the pause button for any reason. A wonderful story with just the right mix of emotion, fun and romance and an engaging blend between the characters, situation and setting. This was the first book I've read or listened to from this author and I can't wait for more. I have enjoyed Eva Kaminsky's narration in other books and she didn't disappoint with this one.

Not only did the narration of this book grate so did the story. Bad accent. Bad story. I'm sorry I cannot recommend this book or narration.