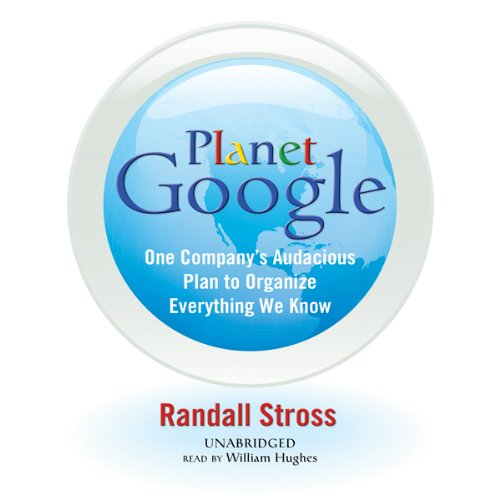 One Company's Audacious Plan to Organize Everything We Know
By: Randall Stross
Narrated by: William Hughes
Length: 7 hrs and 43 mins
Categories: Business & Careers
3.5 out of 5 stars 3.7 (154 ratings)

After one of the most successful IPOs in history, Google set forth on a bold new strategy for its future, a vision so large and controversial that the company has worked very hard to keep it under wraps. The business world has been desperate to learn what Google is up to, because they know that Google is the arbiter of the future of the web.

Now, with unprecedented access to Google's top management, Randy Stross reveals for the first time the audacious scope of Google's new plan, including such potentially disruptive initiatives as free downloadable software, which could put providers like Microsoft out of business, and GoogleEarth and GoogleMaps satellite technology, which is rapidly mapping the entire surface of the Earth in high-powered detail. Stross explores the profound implications not only for the business world but for our culture at large.

This book gives an excellent overview of Google's history as well as a decent thumbnail sketch of the growth of the internet and the history of a few other companies as well--including Yahoo's bungling of search technology that allowed Google to eclipse them.

The author focuses a lot of his attention on showcasing the sometimes brilliant, sometimes serendipitous decisions the founders made that turned a company that was parked in a Stanford University dorm room into a multibillion dollar conglomerate that is rumored to be operating 1,000,000 computers (and growing).

Stross gives a fascinating account of Google's acquisition of YouTube as well as the concerns about privacy and copyright engendered by other projects the company is known for.

The narrator is good on the ears and you'll find yourself wishing there was more to listen to when you reach the end.

I really enjoyed this book as it provided a great view into the Google "products" that I use on a daily basis. I enjoyed the comparisons that the author provided into other companies.

Thought the book was well written and the narration was good. The author does a good job of breaking down Google with little if any biases. The book goes a long way towards making an uninformed industry insider understand how Google is different from other competitors and how they survived so long. It also calms some fears as to wether Google categorizes what you do personally or only per visit.