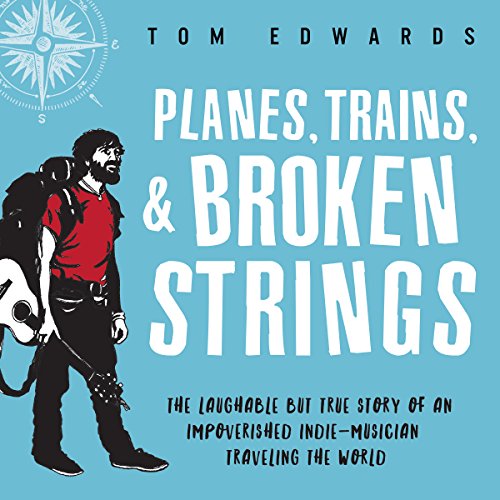 After losing his job, girlfriend, and life as he knew - it all within the span of two short months in early 2013 - Tom Edwards decided it was time to live out his lifelong dream of traveling the world. After turning to his guitar for income and selling most of his worldly possessions, he set out - along with two friends - with big dreams and grand visions of adventures. Shortly thereafter, when the realization was made that the group had nowhere near enough money to support their journey, they found themselves sleeping under bridges, hitchhiking with drug dealers, befriending prostitutes, living as homeless persons, hopping trains, and finding all kinds of other trouble to get into. Then on top of everything else, when tensions arise between the three companions, Edwards wonders if he'll be forced to go on alone.

Follow the hilarious tale of travel-gone-wrong, debauchery, and adventure in Planes, Trains, and Broken Strings, as a broke indie-musician tries to find his place in the world with the help of a cast of colorful characters he meets along the way.

Hard to find a better read

A good guy. Wish he had married my daughter. Great read.
Hate to have a good book end.

Terrific story of some crazy times in multiple places around the world. Very introspective towards the end of the book which was great. Must have been one amazing adventure to have lived!

Entertaining travel-tale with a keen edge of humor

This book brought me to tears with laughter, while at the same time urging me to ponder life and be grateful for the every day pleasures of home. Loved hearing about all the crazy stories and predicaments that came out of 3 guys just packing up and deciding to travel the world as vagabonds. I wish there was a sequel, but I think they've been through enough!

The book and the narration were awesome, the book kept me hooked, interested, made me think, and made me laugh out loud. The narration was superb, whether the accents or voices were spot out on or not, I enjoyed them. The narration by Tom in the audio or the book form made it feel like you were sitting next to a friend at the bar telling the story, and the audio wasn’t like some monotone robot voice just reading the book verbatim with no emotion, it was great!

This book is amazing! Take my word for it, download!!!

I read the book and listening to it is just as good. Tom is hilarious. His journey teaches you things, makes you laugh, makes you think, and draws you in....I never wanted this book to end. I was sad. I’m not good with reviews, but this story is worth the download. Just do it!

loved it! as someone that's about to set off on my own journey this has been an incredibly inspiring read. thank you for sharing your story with us Tom and to be honest I think your accents were hilarious 😂😂😂