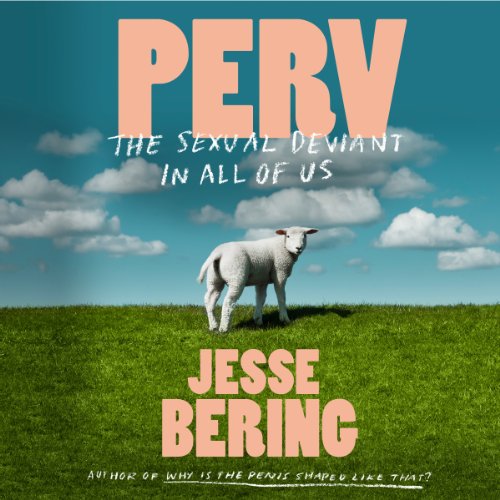 A groundbreaking argument that perversions are more common than we think, from everyone’s favorite provocateur.

In his eye-opening new book, Perv, the award-winning columnist and psychologist Jesse Bering argues that we are all sexual deviants on one level or another. As Bering takes us into the lives of a woman who falls madly in love with the Eiffel Tower, a young man addicted to seductive sneezes, and a pair of deeply affectionate identical twins, among others, he challenges us to move beyond our judgments and attitudes toward "deviant" sex and consider the alternative: What would happen if we rise above our fears and revulsions and accepted our true natures?

With his signature wit and irreverent style, Bering pulls back the curtains on the history of perversions, the biological reasons behind our distaste for unusual sexual proclivities, and the latest research on desire. Armed with reason, science, and an insatiable appetite for knowledge, he humanizes deviants while asking some very provocative questions about the nature of hypocrisy, prejudice, and when sexual desire can lead to harm.

A groundbreaking look at our complex relationship with our carnal urges and the ways in which we disguise, deny, and shame the sexual deviant in all of us, Perv brings our hidden desires into the light.

What listeners say about Perv

About time someone said this

Loved this book. Love the author and his delivery is exquisite. While the subject matter can have an 'eww' factor, it is something I have wanted to see both studied and then brought out of the crawl spaces since I read the Kinsey report a hundred years ago or so. Get off your judgement plank and consider what it must be like to be one of the 'new' pervs.
Well done, Mr. Bering; and thank you.

Would you consider the audio edition of Perv to be better than the print version?

Probably not. It is read by the author. He is a scientist and rushes through many concepts. It is dense in some sections and light in others. I think it is probably better read than heard.

What other book might you compare Perv to and why?

Not sure there is a comparison. It's is pretty unique.

Generally yes. There were places it felt too quick.

I found the fact that women's arousal and sexual functioning aren't connected in order to protect their internal organs fascinating. He lays out a variety of paraphelias that I'd never heard of and why we need to be more tolerant of them. He also makes a great case for defining pedophelia better so we can actually distinguish between the many different kinds of pedophiles and protect those who are most vulnerable and have much more sensible laws around the subject.

I think his summary on this topic is a must read for anyone interested and we should be incorporating this into our curriculum in schools to dispel stigma, reduce harm and help to educate folks about some of the more marginalized sexual minorities out there.

I absolutely LOVED this book. Jesse Bering dared to ask questions that most people consider "Asked and answered!". As Jonathan Haidt has demonstrated ad nauseam, humans tend to have more of a knee-jerk reaction to any moral ideology involving sex. It is one primary way we can signal to others that we are not deviant. Humans have long developed disgust responses to socially unacceptable sexual practices. The curious thing is that depending on where on the globe the humans live and also in what time period, the disgust response varies. Yet, humans believe that certain things are innately wrong. This belief culminates in statements such as, "It's just wrong!" I can recall many times in my own life where I had the feeling that something was just wrong because....... it just is! It was a visceral response, which I assumed was innate. However, I am probably incorrect about my own responses. In a style similar to Chris Ryan in Sex at Dawn, Bering builds a compelling case that such knee-jerk visceral responses are learned.

Like Haidt, Bering wants to override his knee-jerk reaction to really delve into sexuality in all its facets. In a Descartesesque manner, Bering doubts all he thinks he knows. Descartes said we cannot assume that anything is a priori, not even our existence. Bering strips away every assumption and asks about human sexuality, while letting go of all preconceived notions. For me, it reaches the Cartesian destruction of reality. Bering uses wonderful logic (what a great skeptic he is!) to deconstruct each assumption we hold. Unlike Descartes, when Bering builds his argument back up, he uses that same skepticism, logic, and empirical evidence (used in the most responsible way possible), to attempt to understand who we are as sexual beings.

Importantly, Bering goes fishing for minorities -- those who are attracted to children, to old people, to the Berlin wall, to feet, and so on -- in an attempt to understand if there isn't something different about the brains of people who are in a particular minority. Even if Bering fails to provide answers (he seemed to end up with more questions than answers), he asks extremely important questions.

One of the most interesting things in this book was the suggestion that being attracted to children might be a matter of "cross wiring." I had never thought about it in this way. As someone interested in neuroscience, criminology, policy, and treatment for offenders, this suggestion of cross wiring rocked my world. I hope this hypothesis will be well studied. If it pans out, maybe (for the first time) actual, effective treatments can be realized. The cross wiring argument is as follows:

- Normal wiring means, when an adult sees a child, they mount a paternal response.

- When a pedophile sees a child, the wiring does activate the paternal areas and hormones. Rather, it activates the sexual areas of brain, giving the adult an involuntary response of sexual attraction.

The latter internal response is very upsetting for some people, as they *want* to control it, but *can't*.

If we simply sit back and engage in armchair philosophy, how can we ever do anything but catch someone like that after the damage is done? The way we see pedophiles now only encourages them to hide what they feel. We won't even know about them until they have hurt a child. Sure, we can punish them after the fact, and maybe keep them from offending again (that's a big maybe), but can we do better? Not without allowing ourselves to stop judging long enough to try to understand the issues on a deeper level.

Despite my focus on pedophiles in this review, this book is far from simply being about pedophiles. It is about the sexual nature of every one of us. It is about the stuff we are encouraged to not talk about openly. Bering break through so many barriers, when talking about sexuality, which made this an amazing book.

At one point, early on, in addition to including his own personal thoughts and experiences, which I found myself not caring about, Bering discussed Trivers' parental investment hypothesis, and I thought I was going to end up hating the book. But he did such a great job limiting the discussion of Trivers hypothesis to disgust that, for the first time in decades, I liked what someone did with Trivers work.

This book was an excellent academic survey of what we know, and are trying to know, about human sexuality. Bering never gets caught up in so much of the elitist genetic or evolutionary arguments that end up doing more harm that good. This is a book that details the current progress in researching sexuality, in all its facets, and asks important questions we, as a society, need to try to answer in order to come to any type of consensus on what normal sexuality is. We need to answer these questions not only to inform policy (how do we punish sexual crimes; who do we let marry; etc), but also answer within our own selves to even begin to understand ourselves as human beings.

For once, a self-reading author is good

The author read the material in a way that added to the informational and entertainment value of the message itself. I had the feeling at the start that I just had to swallow the message whole, and lie back and enjoy the book.

There were many interesting facts and data. Often, they touched on sensitive areas that too few are willing to approach

Have you listened to any of Jesse Bering’s other performances before? How does this one compare?

Did Perv inspire you to do anything?

Being better informed will help me be less instantly judgmental, I hope, and to base things on facts and actual harms or benefits

I listened to this author on Dan Savage's podcast and was immediately compelled to get the book. It was extremely well-written by a very clever author who is also an excellent narrator. Very interesting, entertaining, and memorable.

Required Reading for a Libertarian mind!

What a wonderful book. Very difficult to read but incredibly important for correcting decades of inconsistent thinking on my part. I could not recommend this book more.

Loved it! Great narration by the author, informative and back by science. He also throws in jokes that make the tough topics more palatable.

very informative and over all a great listen. lots of info and levity to good subject matter

A scientific wonderland with sharp wit

I loved it! He writes amazingly and he phrases his points in such a way. similar to my own thought processes. It was enlightening, entertaining, informative and an absolute ripper!

I've been a longtime fan of the author, Jesse Bering, and his writing. "Perv" is a fun and informative read about the complexities of human sexuality and gives the reader/listener a much broader perspective on how we view even the most controversial fetishes and kinks. I especially enjoyed that this audiobook was narrated by the author himself because it gave the listener a greater experience into the mind and humor of the author. You can really feel his passion for the subject and understand the depth of research he had to endure to write this book. My only real negative is that the book is over too soon. I would have loved to read/hear more!

Where does Perv rank among all the audiobooks you’ve listened to so far?

he is very enthusiastic, and a little self deprecating

really easy listen and lots of great stories of humanity, well worth the time and money

PLEASE PUBLISH HIS BOOKS ON BELIEF