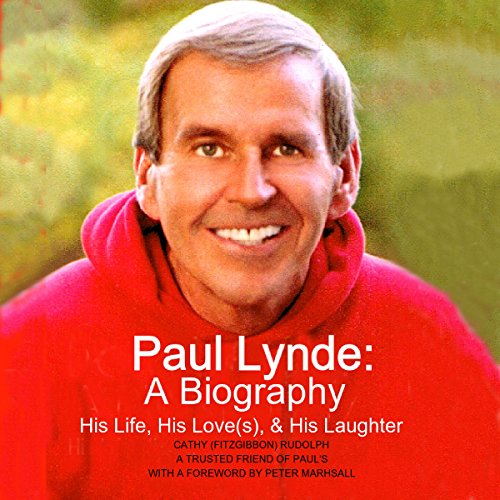 By: Cathy Rudolph
Narrated by: Susan Scher
Try for $0.00

This book will let you into the heart and soul of Paul Lynde. Best remembered for outrageous jokes on Hollywood Squares, as Uncle Arthur from Bewitched, and as the frantic father in Bye Bye Birdie, Paul was never satisfied with his career - or his personal life. But even as he suffered through some of the cruelest of times, Paul continued to make us forget our troubles and was forever gracious to his fans. This is the book those fans have been waiting for. Though he was one of the most original, hilarious, and private actor-comedians of all time, author Cathy Rudolph, his trusted friend, reveals her adventures with Paul - along with his turbulent life story. Here for the first time are interviews with his relatives and personal notes. Also included are memories from his friends and peers including Cloris Leachman, Chita Rivera, Florence Henderson, Kaye Ballard, Peter Marshall, Les Roberts, Betty White, and many more.

"I've been saying for 40 years that Paul Lynde could deliver a punchline better than any other comedian. I look forward to having the book on my library shelf." (Les Roberts, novelist, first producer, and head writer of the original Hollywood Squares)

What listeners say about Paul Lynde: A Biography

Paul was not in Nutty Professor but in Son of Flubber sequel to Abs Minded Professor. Montgomery died in 1995 not 1955.

What would have made Paul Lynde: A Biography better?

More facts that were not watered down. She made him out a saint and we all know he was very mean when he was drunk. She also glossed over his death and made it out to be that he died in his sleep when it is well known he died having sex and whoever was with him ran out of the place and did not stop to call for help for Paul. It was also very clear that she did not like his being gay and put in a ton of stories that he wanted women.

Would you ever listen to anything by Cathy Rudolph again?

Disappointment that she did not write the whole story and that makes me wonder how truthful she was about any of her facts.

Don't waste your time with this fantasy tale of a very funny but troubled man.

The recording/editing was pretty choppy and weird

The recording/editing was pretty choppy and weird for the first hour or so. The narration suffered because of this.

The narrator has Lynde's voice down pat.

The story seemed rushed (maybe because of the editing) and not well researched. I got to the part where Paul died and it was like "...and then he died and had a funeral. The End."

A Swell Read & And A Swell Hear!

If you could sum up Paul Lynde: A Biography in three words, what would they be?

Which character – as performed by Susan Scher – was your favorite?

The book was well written and interesting, and the audio as recited by Susan Scher is terrific! Ms. Scher is well spoken and she has a charming way of mimicking Paul Lynde's distinct voice.

It's a fine audio edition. I recommend highly.

Very pleasant, nice and honest about a complexed person...But then again aren’t we all????

Imagine reading a 5th graders book report but for 5 1/2 hours. That’s what you’ll get from this disconnected, non-linear, barely listenable piece of fluff. The writer starts by telling us how she met Paul and how they became friends THEN makes a left turn with a barrage of anecdotal stories that follow no time line completed with Pauls death where the writer all but forgets to tell us what emotions she had. Next, let’s talk about the narrator. I was convinced with her horrible Paul Lynde impression that it had to be the writer who was narrating this but no. It was actually a paid narrator. WOW! Lastly the editing is scary bad. I heard so many bad edits it was starting to aggravate me. Also at least 4 or 5 times things like “Then Paul Got in his car and drove away” Followed immediately by the same line “Then Paul Got in his car and drove away” I have listened to so many Audible books but this one was by far the worst.

A book worth Reading...

A thoughtful, well written book about a very funny man, whose life wasn't always so funny. Paul will forever be Uncle Arthur to so many of us. This book helps us understand the man behind the jokes. This author has helped his fans know Paul more intimately and I would like to believe that Paul would've been very happy with this book.