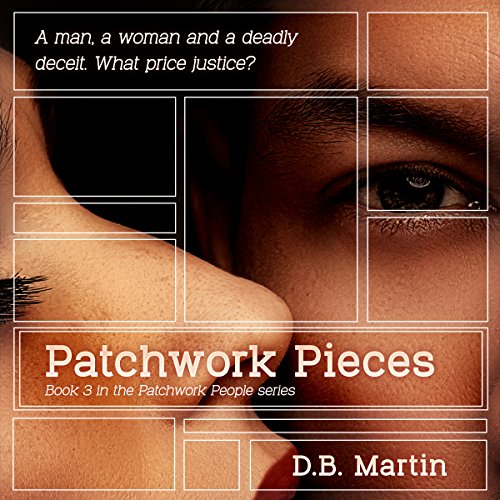 Lawrence Juste is a very different man to the one everyone thought he was. He's a very different man to the one he thought he was too. But then, when you've just found out your whole world has been built around everyone else's deceit and your lies are fairy tales by comparison, why should anyone be as they appear to be? Why should anything end how it appears to end? Especially if there's revenge involved and you're a man on the edge of oblivion.

What listeners say about Patchwork Pieces

After listening to the entire series I hate to say too much for fear of giving something away. I'll keep it simple, Mr. Juste is still seeking the answers to untangle the web of his past but it continues to constrict him tighter than ever.

Be ready for plot twists extreme. Everything you mighg have thought while listening to the series forget it. It takes a lot of talent, skill and an amazing imagination to write something this good. Kudos to D.B. Martin.

This series is a must!

Great end to a great series!

If you have not listened to books one or two, do yourself a favor and go back. Without the backstories from the first two books, you will not be able to experience the full heart-stopping, that-did-not-just-happen, ending to this series that is book three.

Lawrence Justice was used, and used badly, by everyone and anyone in books one and two. Book three was his redemption. Mostly.

I loved how all of the pieces came together. I loved the consistency of the narrator and how perfect he was for this listen. But mostly, I loved the ending. It wasn't pretty but it fit a man who spent most of his life running from himself.

I know this story had to end but I will miss it. What a great series.

Yes. With advice to read or listen to the first two books in the series. There is an evolution that makes the story move on a deeper level. Both in the conflicts and the characters themselves.

Getting answers to why the characters act and react to situations as they do.

What does Rob Groves bring to the story that you wouldn’t experience if you just read the book?

Lots of distinct character voices. A sense of drama and timing as the story flows. A easy to listen to voice.

It was elaborate, to the point I needed to take a bit of time to digest it. Over a course of several listening sessions.

This is an audio book that needs your full attention to follow the story. It is well written and can be read as a stand alone book, but in my opinion, it's more fulfilling to listen to all of the triology in order.

Thanks for the opportunity to review it!

This review copy audiobook was provided by the author, narrator, or publisher at no cost. Which I can only assume was voluntary on their part. I am happy to give my honest review of it. I think I'm suppose to mention how reviewing this was voluntary on my part too.

I was hooked!! I couldn't put the book down!! I loved how the characters were very well described. I was not expecting that plot twist! If you love a page turner that you can't put down this is the book for you to read.“I was voluntarily provided this free review copy audiobook by the author, narrator, or publisher.