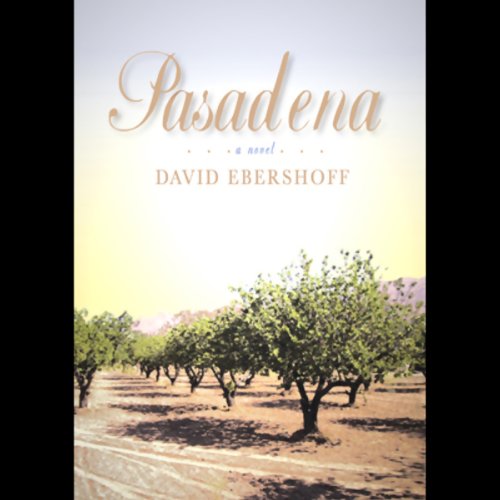 By: David Ebershoff
Narrated by: Lorna Raver
Try for $0.00

Pasadena, David Ebershoff's sweeping, richly imagined novel, is set against the backdrop of Southern California during the first half of the twentieth century and charts its rapid transformation from frontier to suburb. At the story's center is Linda Stamp, a fishergirl born in 1903 on a coastal onion farm in San Diego's North County, and the three men who upend her life and vie for her affection: her pragmatic farming brother, Edmund; Captain Willis Poore, a Pasadena rancher with a heroic military past; and Bruder, the mysterious young man Linda's father brings home from World War I.

Pasadena spans Linda's adventurous and romantic life, weaving the tales of her Mexican mother and her German-born father with those of the rural Pacific Coast of her youth and of the small, affluent city, Pasadena, that becomes her home.

When Linda's father returns from the war to the fishing hamlet of Baden-Baden-by-the-Sea with the darkly handsome Bruder, she glimpses love and a world beyond her own. Linda follows Bruder to the seemingly greener pastures of Pasadena, where he is the foreman of a flourishing orange ranch, the homestead and inheritance of the charming bachelor Willis Poore.

"A rich blend of California history in a well mastered plot that maintains an enduring element of surprise." (Booklist)
"Lorna Raver performs with great intelligence and enthusiasm. Her flexible voice reaches from sultry to shrill to raspy effortlessly." (AudioFile)

What listeners say about Pasadena

Would you consider the audio edition of Pasadena to be better than the print version?

The subject matter is such that this story would be great in audio and print. I'd love to see it on film but I fear that a lot of the story line would be lost.

Have you listened to any of Lorna Raver’s other performances before? How does this one compare?

Not going there again! I've written at least five reviews about Ms. Raver in the past hour! SHE IS A MASTER! 'Nuff said!

I found the book to be a masterpiece. Does one really track their open emotions from just reading a book? No EXTREME reaction, just the satisfaction of knowing that I've experienced literary greatness.

It's really wordy at times and takes awhile to get into it but the story becomes really interesting. There are a lot of things that are left unresolved and you just have to assume specific things happened as a reader...