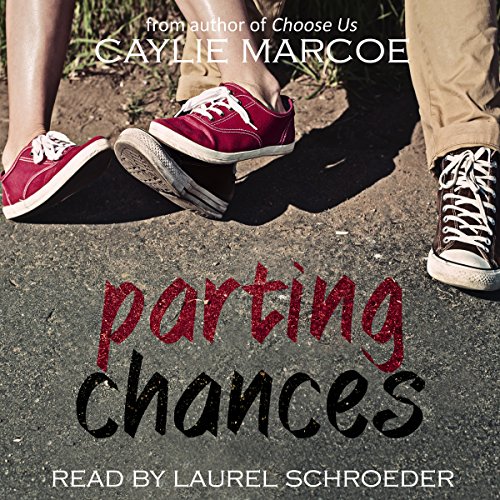 Haley Cavanaugh's heart is broken - shattered into a million pieces, and that's just how she'd like it to stay. She doesn't believe she deserves happiness. She doesn't understand how to move on while her life is falling apart, and her reality is destroyed. Enter Eli Park. Eli is someone Haley thought she knew but who turned out to be so much more than she remembered. He sees through her pain and refuses to be pushed away, even when she lashes out. Eli's patience is both frustrating and surprising. Haley was so sure she wanted to go on feeling nothing, but Eli stirs emotions she can't deny. Will Haley allow Eli to help her through this horrific time so she can find herself again? Or, will she lose the only person who can help heal her heart?

This book was pretty good. I loved the story but the characters were a little unrealistic for my taste. She was a wreck, he was too perfect. Not something I could relate to very well. Either way, I still enjoyed the book and its extreme drama.

The narration was awesome! I'm becoming a big Laurel Schroeder fan! She made this story better for me.

9 of 10 people found this review helpful

Where does Love Found rank among all the audiobooks you’ve listened to so far?

In the middle of the 2000 books I have listened to.

Eli, he has the patience of a saint.

Have you listened to any of Laurel Schroeder’s other performances before? How does this one compare?

No but she does a great job in narrating this book.

When her mother is at the wedding. A very moving scene.

Loss and moving on

I actually liked the family dynamics, the relationship between Cavanaugh’s more than the Haley/Eli relationship. They seemed to be a tight knit family but I assuming going through the first round of cancer with the mom made them all closer. The writing was okay, although I would have liked a little more depth to the characters. For instance, Eli was too perfect, and I would have liked Haley to evolve a little more.

This characters actions in this story felt more like high school than college. It was that high school level of communications in relationships. I am going to give Haley a pass because I understood where she was coming from. She was queen of mixed messages and that made me like Eli even more. He navigated those rocky waves like seasoned sailor but I didn’t understand why Haley felt she couldn’t be there for her mom and family, and still have a relationship with Eli.

It’s a nice story about loss and moving forward. The narrator did a great job with an emotional topic.

This book is such a sweet book with lots of emotions. Haley is dealing with her mother's sickness while going to college, and falling for a boy she used to know. She feels guilty about having a good time with Eli, while thinking about her mother.

I received a free audio copy of this book to write a review.

It's the story of a young woman that is faced to learn to live and the love and to continue with life as her mother dies of cancer.

It's well written and makes you smile and cry at the same time.

I look forward to more from the author and the narrator.

"This audiobook was provided by the author, narrator, or publisher at no cost in exchange for an unbiased review courtesy of Audiobook Blast.
In 1968 I was 10 years old when my mother died.I never got to say good-bye.
In 2004 my 14 year old daughter died.

There were so many things that mothers and daughters should do together, that never happened.
This book follows Haley as her family dynamics change, and she grows up and is supposed to move on. We hope she will allow herself happiness, that she feels she does not deserve.

Our high school librarian asked me to recommend good books for the library to purchase. I loved the audiobook so much I sent her the info for a print edition.


Haley Cavanagh finds that her mother's cancer has returned and there is nothing and no way to treat it. While her parents insist she continue with schooling a few hours away, her heart isn't into it as the hole her heart becomes larger as time wears moves along.

Eli Park is the best friend to Haley's best friend's boyfriend. (Got it? The 2 guys are best friends, the 2 girls are best friends.) Haley barely remembers Eli, last noticing him when they were freshman in college and she has barely given him a thought over the following years.

While Haley closes off her heart from anything else that can hurt her, Eli decides that it's time for him to share his feelings with her.

I noticed that many of the reviews for this book were negative. I suppose it depends on your state of mind while you're listening to it. I thought the book teetered on adult versus young adult romance – tipping more towards the latter. But I enjoyed the book (I don't normally like young adult) and Laurel Schroeder's narration was perfection.

Again, LAUREL SCHRODER'S PERFORMANCE WAS PERFECTION. (I rarely award 5 stars or use all caps!)

Notes: Some sexual innuendos but nothing specific or graphic

It was a bit long, in my opinion, for the subject matter. That would be my only criticism. Five hours long would have been perfect and none of the feeling of the book would have been lost. *I was offered a listen at this book in exchange for my review.


Thanks for checking out my review. Reviews help me in deciding whether or not to purchase a books, especially new authors or performers. Sometimes they are helpful and sometimes they're not. If you found this review helpful would you take a moment and select 'YES' below the next paragraph?

Follow me on Audible, if you'd like. My favorite books are contemporary romance and counter-terrorism/thrillers books by authors like Vince Flynn. However, you will find books from all genres, as I'm asked to listen to and review.

Authors & narrators, feel free to share my review on any other media that you would like. It's all yours, please include "review from DK via Audible" and link it back to this site.

What did you love best about Love Found?

The grieving process that Hailey goes through. It was very intense and detailed. The notion that she is undeserving of happiness while her mom is dying a slow painful death is something we can all relate to I think.

Her mom is honestly me favorite character in the audio version. She was so adamant about her family not allowing her sickness to interfere with the rest of their lives, knowing that her death would impact them all on such an intense and intimate level.

Would you listen to another book narrated by Laurel Schroeder?

I would be interested in listening to another one by her, to have a better idea of her narrating ability. With only one book from her under my belt, I really have nothing to compare it too.

The title. It encompasses the entire book really.

This book will always hold a special place in my heart because it is the first book I read that ever made me cry. Not just little tears either, but big crocodile tears most would call the ‘ugly cry’. So it was really hard when I listened to the book and found myself disconnected from the MC. We share a common past; my mom also died of cancer so I totally got her character. She is sooooo stubborn, almost bordering on childish. Took the whole book for her to accept her feelings. Kinda irked me that she kept him dangling.

Eli on the other hand has the patience of St. Monica. He was a great opposite lead for her. I do wish I could have got to know him a little better though, I could have connected better with him I think. I understand the point of the book was her grief but a little more depth in his background would have gave it a bit more oomph.

I found the book to be overshadowed by the narrator’s high-pitched voice. She surprisingly nailed the male voices but I found myself having a hard time liking the MC because her voice was so whiny. I read this book before I listened to the audio which is how I do it, like a compare and contrast of reading and listening. The differences were very big in my head. Hayley seemed to be a bit childish in her behavior when I listened to it but in the book I never noticed, I am not sure if it was intentional or not but I just couldn’t get in to her character this time around.

Still a great book and I would highly recommend it to others.

Too Depressing For Me

This audiobook was provided by the author free of charge in exchange for an unbiased review via Audiobook Blast. I don't like to read books that are depressing. So, I didn't finish it all the way. I'd definitely give this author another shot though.

Has Love Found turned you off from other books in this genre?