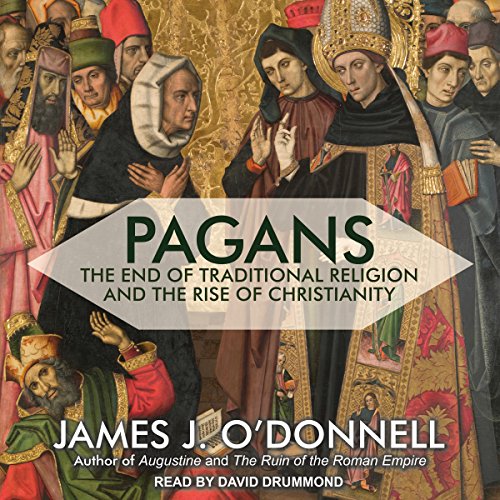 By: James J. O'Donnell
Narrated by: David Drummond
Try for $0.00

Pagans explores the rise of Christianity from a surprising and unique viewpoint: that of the people who witnessed their ways of life destroyed by what seemed then a powerful religious cult. These "pagans" were actually pious Greeks, Romans, Syrians, and Gauls, who observed the traditions of their ancestors. To these devout polytheists, Christians who worshiped only one deity were immoral atheists who believed that a splash of water on the deathbed could erase a lifetime of sin.

Religious scholar James J. O'Donnell takes us on a lively tour of the Ancient Roman world through the fourth century CE, when Romans of every nationality, social class, and religious preference found their world suddenly constrained by rulers who preferred a strange new god. Some joined this new cult, while others denied its power, erroneously believing it was little more than a passing fad.

In Pagans, O'Donnell brings to life various pagan rites and essential features of Roman religion and life, offers fresh portraits of iconic historical figures, including Constantine, Julian, and Augustine, and explores important themes - Rome versus the east, civilization versus barbarism, plurality versus unity, rich versus poor, and tradition versus innovation - in this startling account.

What listeners say about Pagans

What perhaps is most surprising is that Harper Collins and Arizona State University, where Mr. O’Donnell serves as a librarian, are not completely embarrassed by this publication. As it represents some of the worst aspects of 19th century scholarship and historical perspective. Mr. O’Donnell obviously sees ancient people as primitive, beneath our modern sensibilities, and incapable of possessing a complex and nuanced theology. All of these perspectives are wrong, incredibly short-sighted, and prevents us from getting an accurate portrayal of historical events. I don’t say this lightly, but Mr. O’Donnell is a poor historian and scholar of religion.

The evidence of this has been pointed out by numerous others. While he calls the book, “Pagans: The End of Traditional Religion and the Rise of Christianity,” it fails to deliver any of that. Just like the 19th century scholars before him, O’Donnell confines paganism to late Greco-Roman paganism. As if the rich and varied practices of the Greco-Egyptian, Slavic, Germanic, and Celtic paganism were non-existent. I realize this is putting words in his mouth, but his obvious disdain for Greco-Roman practices can only lead one to assume he finds any other tradition even more contemptuous.

In fact, he seems to have contempt for the practice of any religion, which makes one wonder why he would choose this subject to study. If you are not going to approach the matter to show its impact on human culture, for good and for ill, why do it at all? If you are not compelled by the power and creative genius of religious experience, why would you even approach this subject matter? If all you want to do is show contempt for religion itself, then I’m sure there are plenty of atheist journals out there that would appreciate this myopic argument. It need not be shelved in history.

He ad nauseam repeats the same mistakes of scholars before him, which makes it all the more difficult to forgive this books shortcomings. That mistake is to simply not take the sources at their word. He assumes they are lying, or have some other agenda, or are simply too primitive. Until we can take people of other cultures at their word, and honestly accept their accounts of religious experience, we will never understand another culture, past or present.

I recommend that Mr. O’Donnell spend some time studying the work of anthropologist, Wade Davis, to develop a perspective that does not belittle the source material and so make his work relevant. Here’s something to help him get started.

“We have this extraordinary conceit in the West that while we’ve been hard at work in the creation of technological wizardry and innovation, somehow the other cultures of the world have been intellectually idle. Nothing could be further from the truth. Nor is this difference due to some sort of inherent Western superiority. We now know to be true biologically what we’ve always dreamed to be true philosophically, and that is that we are all brothers and sisters. We are all, by definition, cut from the same genetic cloth. That means every single human society and culture, by definition, shares the same raw mental activity, the same intellectual capacity. And whether that raw genius is placed in service of technological wizardry or unraveling the complex thread of memory inherent in a myth is simply a matter of choice and cultural orientation.”

- Wade Davis, The Ethnosphere and the Academy

I couldn’t finish this terrible book. I wanted to learn more about the pagans, their culture, migrations, etc. Thisnarrative was focused on one issue....sacrificing! People and animals. Endless details of this one aspect of their lives. A total waste of money!

If you’re a pre junior-high illiterate, who doesn’t mind being blatantly patronized, this book is for you.