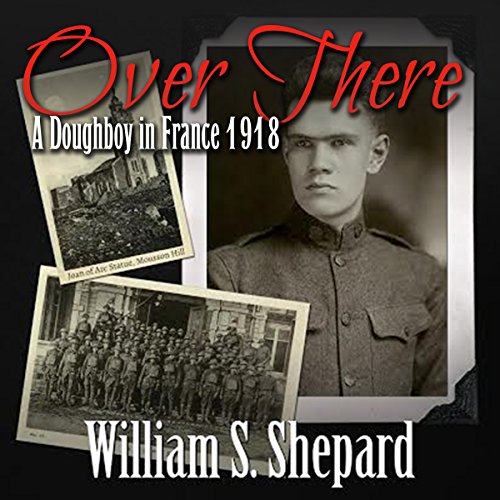 Over There: A Doughboy in France 1918

My father's notebook, kept carefully throughout his World War One service, is a treasured family keepsake. It was, however, rarely actually read, much less consulted for its first-hand account of his experiences on the Western Front. We all knew the basics, that he had been on the front lines on Armistice Day, November 11, 1918, and had recorded that fact. I transcribed that day's moving entry a few years back, and sent it to each of his grandchildren.

With the approach of the centennial of World War One, and America's entry in 1917, it seemed the right time to take a closer look at the notebook. I am glad that I did. It was written in pencil, but fortunately, during a period of convalescence, Dad had gone over much of it with pen and ink. He had also supplemented his notebook entries with more broadly focused memos, which gave depth and context to his earlier notebook entries, when the writer was mindful of security restrictions. Gradually, as the weeks passed, the handwriting became more familiar. The outlines of the story, how Dad enlisted, trained at Fort Devens, Massachusetts with his 301st Signal Corps Field Battalion, and then went to France were becoming familiar. The larger story was fascinating, including their naval convoy across the U-Boat infested North Atlantic, from Halifax, Nova Scotia, to Great Britain, and passage across the Channel.

Then came the eastward movement through a rail and training network largely laid out by General Pershing in 1917 across France to the eastern sector, which was to become the American Sector, in Meurthe-et-Moselle, Lorraine. That is where Dad's journey led, to an isolated and rocky hill on the Moselle named Mousson Hill, and combat with the American Sixth Corps. It was the time of the St. Mihiel Salient, and the Meuse-Argonne Offensive.

What listeners say about Over There: A Doughboy in France 1918

This is a verbal reading of a diary. However the diary entries are not all that entertaining. An excerpt goes like this

:Tuesday dec 17 1918 went to mess hall, they had steak and potatoes ate to much. Bunked with Carl that night”

Then on to the next. Almost no detail or action.

I want to thank the Shepard family for sharing their father/grandfather’s diary with us. It is a great resource of information for future historian and those like me who want to know more about the Great War that took place 100 years ago.

Shepard was in the 301st Signal Corp Field Battalion that was stationed in France in 1918. I found the description of his trip through Montreal, Quebec in the spring of 1918 very interesting as was his descriptions of the troop ship journey down the St. Lawrence River. He noted how war weary the Canadians were after four years of war.

The Signal Corp is primarily a non-combatant unit. Shepard provided great descriptions of France and the people. He was in the American sector at Meurthe-et-Moselle, Lorraine. He was stationed on the hill called Mousson Hill during the St. Mihiel Salient and the Meuse-Argonne offensive. This is the area of Joan of Ark. His description of November 11, 1918 was most moving. Shepard provided a good description of what the daily life of a signal officer was like in 1918.

The diary is short and an easy read. This story could have been greatly improved with a narrator such as John Wray. The narrator B. Z. Kelly was barely adequate. The reason I am giving this book a 3 star instead of a four star is because of the narrator.

WORST NARRATION I HAVE EVER HEARD!

If I could give it a 0 I would. Unlistenable. JUST HORRIBLE NARRATION. DO NOT WASTE UR $. I TRIED HARD, WHY THE NARRATION WAS IN A CLIPPED UNFINISHED CADENCE IS UNKNOWN. ASKING FOR MY $ BACK. CAN'T GET PADT CHAPTER 5!