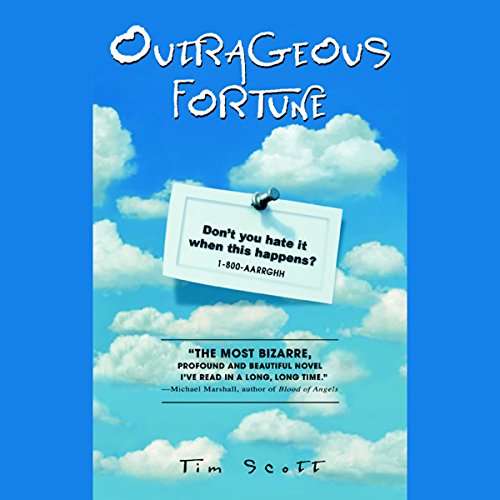 By: Tim Scott
Narrated by: uncredited
Try for $0.00

In this outrageously funny, outrageously inventive debut, one of the most outrageously talented new writers to break onto the sci-fi scene in decades asks the most loaded question of all: "Don't you hate it when this happens?"

That's what the business card asks Jonny X67, dream architect to the rich and jaded. It's all the thieves who stole his house left behind. And as if that weren't bad enough, a saleswoman named Caroline E61 drops from the sky to sell him a set of encyclopedias and won't take no for an answer. Can his luck get any worse?

In this rip-roaring roller-coaster ride through a brilliantly imagined future of paranoid absurdity, Jonny X will learn the answer soon enough when he falls afoul of a lunatic motorcycle gang nicknamed the Four Horsemen of the Apocalypse, a relentless Belgian assassin, and his own irate girlfriend. Traversing a cityscape whose neighborhoods are organized by musical genres, running into joke-telling elevators and holographic computer viruses, Jonny is about to learn what a nightmare it's going to be to get his old life back, in a reality warping faster than the speed of imagination. Outrageous Fortune heralds a marvelous new talent sure to be delightfully altering the minds of readers for years to come.

What listeners say about Outrageous Fortune

This is a fantastic novel about an unbelievable futuristic world where dreams and reality are stirred together. This was a very fun and thrilling listen.

This is a very funny book. However, I don't think Scott should be compared to Adams and Pratchett as much as he is. This is a comic novel, but Scott's style is more surreal than Adams and Pratchett's. I was occasionally reminded of Kafka by the unexpectedness of the events.

I don't think that only English authors can write funny novels. Vonnegut did okay, and he was from Indianapolis.

I also enjoyed the reader. The book is set in Santa Cruz, and the protaganist and his buddies are surfers. The reader did a great job of conveying the laid back attitude of the central California beach crowd.

Try this book out if you're looking for a funny adventure in a bizarrely imagined, not-too-distant future.

The author tries to capture the hip vernacular of the california surfer "dudes", who are the main characters of the story. The hero, unfortunately, seems clueless throughout the story, and the number of hip futuristic concepts thrown at the reader are seemingly purposeless and without real meaning (armed Limpit encyclopedia salesman dropping from choppers). The end of the book starts to shove plotlines towards a conclusion in a really haphazard manner, and I found myself quickly losing interest. I still haven't finished the book, and I don't know if I'll be able to.

I've only dropped reading three books so far in my life - this one, and "Merrick" & "Violin" by Anne Rice. Different reasons, but ultimately they just didn't hold my interest.

I wasted my time so you don't have too

Tries to be Pratchett-ish, Adams-ish but doesn't have the narrative wit. F-bombing does not humor make.

I liked it! It was a very good listen. The plot keeps you wondering what is going on and why? The characters are well developed. I do recommend this book. One word of caution. The F-bomb is dropped several times through out the story.. I started the audio book while my daughter was in the car with me and the first 3-4 words of the book are the f-bomb. Overall - Very good.

Almost but not quite part 2

Vonnegut was a great writer indeed, but Vonnegut vehemently denied being a science fiction/fantasy writer, and if you go to Barnes and Nobles your will find Kurt Vonnegut next to Voltaire, not next to whoever is in the science fiction section with the last name of 'V' whoever that may be. This is because Vonnegut is literature, straight laced, satirical literature, more than can be said for Kafka or the Yahoo who wrote this book. Science Fiction/Fantasy is its own entity. I love Orson Scott Card, Heinlein, Alan Dean Foster, Asimov, LeGuin, Bujold, Spider Robinson; just to name a few, but these writers are definitely not the same as Vonnegut, Kerouac, Celine, Dostoevsky, or whoever. One set is science fiction/fantasy the other is literature. Vonnegut belongs in the second. Also I know good science fiction when I hear it or read it, and I know good literature when hear or read it, and this particular book is none of the above. For me to even put him in the category or soft fantasy the same as Douglas Adams, Terry Pratchett, and Jasper Fforde, who are substandard to the real sci-fi giants mentioned earlier is an overstatment. So my answer to your review is that I am demoting this book from three stars to two stars. This author should write you and tell you to keep your criticisms of my criticisms to yourself because his book is being demoted and defamed because of you. Thankyou have a nice day.