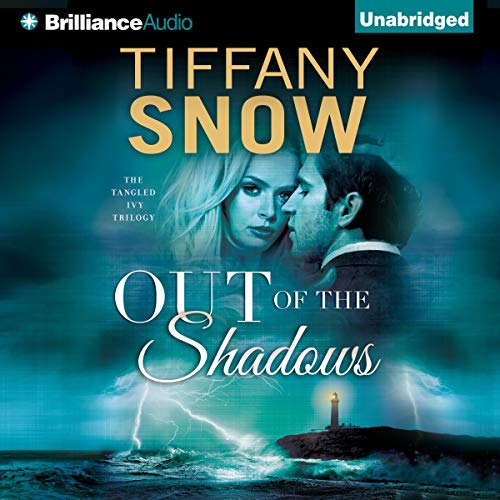 Out of the Shadows

By: Tiffany Snow
Narrated by: Karen Peakes
Try for $0.00

Ivy Mason is no stranger to trouble - though so far she's always managed to outrun or outsmart it. Now a nasty man-made virus and an FBI manhunt have her desperate for a cure and on the run for her freedom. Even her romance with British secret agent Devon Clay may have deadly consequences, placing her squarely in the crosshairs of a shadowy international assassin, Vega.

Devon is determined to take Vega out, but first he must make sure beautiful Ivy is out of danger. When she escapes FBI custody, the couple rekindles their passion and sets off on a pulse-pounding adventure across the United States and around the globe. En route, Ivy and Devon discover new truths about their nemeses - revelations that will test the limits of their love.

In this thrilling conclusion to the Tangled Ivy trilogy, Ivy Mason learns that the path to justice - and love - is more complicated and fraught with danger than she ever could have imagined.

What listeners say about Out of the Shadows

Best Book of the Series

What made the experience of listening to Out of the Shadows the most enjoyable?

This is IMO the best book of the Series. This book focuses on Ivy and Devon's love and commitment for each other. There's a lot of suspense, twists, and surprises as Devon continues with his plans to quit Vega and Vega tries to stop him.

Karen Peakes performance was fantastic. She has a sexy British male voice for Devon and she also has a believable Scottish male voice. Her character voices are very consistent so you know who is speaking without the mention of their name.

This book is definintely worth a credit but at the price of $7 and some change it's a no-brainer.

What made the experience of listening to Out of the Shadows the most enjoyable?

There was the perfect amount of intrigue, suspense, and steamy scenes in the story plot to keep me more than engaged. The descriptions were detailed enough that I could picture the scenes in my mind, but not so much detail to distract from the plot.

Devon was my favorite character. Although he had a harsh profession, he still had a good heart. He just needed to be reminded of it. I would have said Ivy, but there were times in the story when I got frustrated with her for not using her head and getting herself into trouble....again.

She was excellent in this series!! I am glad that the same narrator was used for all three books. You could easily identify the characters throughout the narration. She also did a great job on the accents and inflections. I am going to see what other books she narrates and, more than likely, purchase them.

There were several parts of the book that got to me. The scene where Ivy and Devon were both crying, and Devon was pouring his heart out about how much she meant to him and how they both needed to fight for her survival. (I actually shed a tear or two - which surprised me because I typically don't do that.) I also laughed at myself because I was so into the books that, on a couple of occasions, it was so suspenseful and I was afraid to hear what was going to happen next...I turned the book off. Yes, totally silly....I know.

This is the second series written by Tiffany Snow that I have listened to. She is now one of my favorite authors.

The third installment of this triology got a little better in the story, but a bit dragged out. I have to say that this is not the author's best triology and the main character was a bit predicatable and too naive at times. However, it was entertaining.

love, laughter, excitement and more! I loved the part about the truck drivers.. thank you!

A nice finally but with many MANY medical errors which was frustrating to listen to. I wanted to fix the storyline.

I couldn't stop listening until I had finished the entire series. Karen Peakes did an awesome job at performing the many characters and Tiffany Snow did not let me down with this captivating story.

Great finish to a captivating adventure.

I loved this series. Each book was full of beautiful images and heart stoping action. Would make a great movie.

The final book to this series was just as good as the first two. I hated for it to end. Great audio performance.

A very satisfying end to a great series

Tiffany Snow knows how to create superb romantic suspense series.
Out Of The Shadows was a fantastic ending to the trilogy! Lots of action and suspense with some developments that I hadn't expected at all and blended with a truly swoon worthy romance and some great humor. Who needs James Bond, when there's Devon?! It was really interesting to find out about Devon's background and get the back-story to the Shadow. There were some excellent secondary characters. I liked the humorous scenes with the truck drivers and would also love to read a story about Beau and his love interest. The way Ivy has developed in this series from being an insecure damsel in distress to kick-ass heroine in this one was brilliantly done, while Devon seemed to have gone a tad the other way from slightly distant alpha male to a bit sappy and almost overly romantic, but only almost.
Karen Peakes has a great range of different voices and accents that are all very believable. You always know exactly who is speaking without it being mentioned. Her rendition of Devon was such a pleasure to listen to, I was really sad when I got to the end.
I would highly recommend this entire series for romantic suspense readers, but start with the first one in the series, In His Shadow.

Best narrator for this series !!

I love all of Tiffany’s books! This I think has been the best series. Karen is the absolute best narrator ever switching easily between, American, English and Scottish with aplomb. Brilliant just brilliant.
The book are superb insightful, full of drama, fights, love scenes what more could you want. Can’t wait for the next series! X

Again Snow thrills us with the end of this series.

Again Snow thrills us with the end of this series. Ivy and devons story is fantastic and the final part to the series was everything u expect from a Tiffany snow novel. Read this author u will never be disappointed.