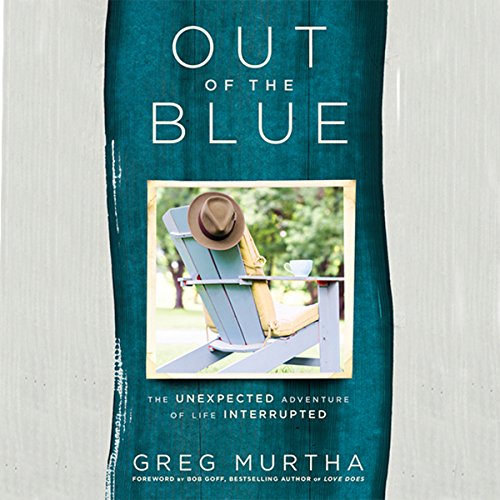 Out of the Blue

Greg Murtha's high-achiever life didn't go as planned. Not even close. Cancer interrupted it. And in Greg's words:

That's a good thing because, without cancer, I would never have embraced the joy of following Jesus with reckless abandon or experienced the exhilaration of sensing the promptings of the Holy Spirit. I would never have acted in obedience to what he leads me to do (what he has wired me to do) or joined him in his master plan.

In God's grace, he allowed me to get so sick I had to slow down, abandon my plans, move out of the way, and learn to trust him by just being. Frankly, I would rather enjoy life this way (God's way) if only for a few years, than live for decades wrapped up in my small, timid plans and the insecurities present in that lifestyle.

Without cancer, I would have remained that somber, self-righteous, smug, narrow-minded Christian who turns people off: the Christian who judges instead of loves, clings tightly to the status-quo plan, and thinks he can earn God's approval. The Christian who misses the joy of simply following Jesus the way he intended. You might say, cancer got me out of my performance-based, fearful existence and into the bigger story the grand adventure.

Following Jesus in the unexpected led Greg to life-giving exploits, and he wants the same for you. Because lots of things interrupt our well-planned lives. Out of the Blue will help you embrace interruption as adventure, rather than adversity. It will lead you to the exhilarating bigger story God's story and your unexpected role in it.

What listeners say about Out of the Blue

Sometimes there are no words.

I met Greg several decades ago in front of Chuys in Dallas. From that point forward, he was a loyal and trusted friend. He struggled with cancer but often times seemed to defy nature. After weeks of chemo, he would be out for a run. Greg took his diagnosis in stride as much as anyone I have seen. And Greg listened to Jesus. He paused his fast, performance based life and became a partner of Christ. When He asked Greg to help someone, Greg did it. And not just once, but for years and until his last breath. I knew Greg but I know him more after reading this book. It has helped me look more closely at my own performance based life and consider how living more purposely can make all the change in the world for me in this lifetime.