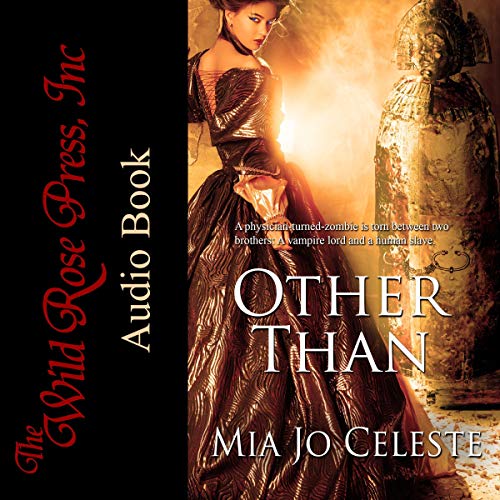 By: Mia Jo Celeste
Narrated by: Keira Stevens
Free with a 30-day trial

It only takes one drink from the Water of Immortality to kill Evie Woods - halfway. Trapped in undead flesh, the world’s last skin-slider wakens on an island purgatory where a cursed spring bubbles with immortality, and zombie cannibals crave living flesh. Her only hope of escape rests in the hands of the one man who would see her fail. Lord Victor Lowell, the man of her dreams and darkest nightmares. Contrary and intractable, Victor preys on others to maintain his angelic charisma and preternatural prowess.

Trapped in an ever-escalating war they can’t stop, Victor and Evie fight time for a cure, but as the long days pass, blackness tears at Evie, ripping her thoughts from her one memory at a time. Victor will do whatever it takes to prevent her from deteriorating into a rotting husk, even if it means dooming himself, but Evie won’t surrender his soul without a fight.

What listeners say about Other Than

Other Than by Mia Jo Celeste

This novel is kind of weird! The story plot is very unusual and unique! I love it so much.. Very entering.❤ The narration by Keira Stevens is also very good. 🎧 Audiobook Obsession Reviewer

This story had everything! Suspense, romance, lots of different aspects that I did not see coming. This is not your typical vampire book which is refreshing. It was different from anything I have read and I really enjoyed it. The narrator is great and I loved listening to her.

Evie is different than most humans but that won’t save her from the same illness that infects them. Changed into a zombie and sent to an island of cannibals where not everything is as it seems. Evie finds love, intrigue, friendship, and deceit amongst the atrocities of the island. Can they find a cure and are all who are sick wanting a cure. Keira does an excellent job with the narration. This story is original and enrapturing.

Other Than ensnared my attention with its cover & tagline. The synopsis showcases a intriguing tale with suspense ravelled throughout the narrative. A dystopian tale with a perfect balance of romance and dystopia. Zombie cannibals, vampires, human slaves, all interweaved into the narrative. With new twists, new races, & a whole new & scarier ways to look at zombies. I think if there was music in the background it would have made the listen more enjoyable. Narrator Kiera Stevens personify a british accent with a perfect pace and tone, no choppy parts. A pleasure to listen to. Overall a enjoyable listen. 🎧 Audiobook Obsession

This was such a unique story! The characters and storyline are woven into a delightfully dark romance. A battle between good and evil, addiction and love, life and death. Who will win? You must listen and find out!! #audiobookobsessionreviewer

A story unlike anything I’ve read before.

Other Than is a really unique book. I’ve never read a story like this one and I was completely intrigued by it. The book takes place in 1774 and is told from the perspective of Evie (the book is written in 3rd person). Evie is a skin slider, which is like a shapeshifter, except she only changes her physical appearance, not into an animal. The story begins with Evie “waking up” after having died from a virus. She’s on a ship with her father, traveling to Lowell Island to try and find a cure for her condition. Before the ship arrives, Evie’s father dies and Evie discovers she has a connection/bond with one of the other passengers on board. That passenger is Victor and he is the lord of Lowell Island. They arrive and Evie has to quickly learn to navigate her new relationship and everything else that is happening on the island while trying to find a cure for her condition. There is A LOT that happens over the course of this book. The action is non-stop and is sometimes pretty violent and bloody (I mean, it’s a story with zombies, so of course there’s going to be some blood and violence). I kinda think I need to read this book again because I feel like I didn’t fully absorb everything that happened in this book. The book does have a relatively happy ending, but it ends in a way that seems like there may be a follow up book. One thing that I would have liked to know more about is the connection between Evie and Victor. I wanted to know why the bond/connection developed and if there’s some other purpose for it, aside from just kind of speeding up the whole relationship aspect of the story. Overall, I really liked this book and the narrator did a great job narrating the book. Once again, this book is unlike anything I’ve read before and is not a book that everyone will like. If you’re looking for a different type of story and want to step outside of your book comfort zone, then at least check out the book sample because this book is worth checking out. #AudiobookObsession #AudiobookObsessionReviewer

This story was full of action, love and hate. Victor's mother is the character you will love to hate. And every time you think she may change she never does. His father I kinda felt sorry for and so wanted him to change. Evie's special gift as a skin-slider was quite new and interesting to me. I did find some parts of the story a bit confusing and found myself wondering if I had missed something or misunderstood. The narration was fantastic. Keira Stevens really brought the story to life and kept it interesting. Between the story and the narration you will find yourself hurrying to get back to it.

Loved this! Such a unique blend of historical and paranormal with a unique kind of zombie. It was hard to put down my headphones with this one! Fantastic narrator who really brought the story to life by combining accents and emotion to form a vivid portrayal of the characters. I received a free review copy of this audiobook at my request and I have voluntarily left this review.

The story was different from other books I have read/listened to. There were twists and turns that totally surprised me. I love the part where Evie and her father got reunited only to be parted again. It was indeed a sad part, but it was also inspiring and heartwarming because it proved that a parent can truly sacrifice everything, even his own life for his child - unconditional love in its truest form. I love the narration. The different voices and accents were truly delightful to listen to. Other Than is a great book. It tells of a love story (a very complicated on) between two different creatures trapped in a doomed war - neither willing to give in nor give up.

So much going on

This is a non stop action packed book. I was a little lost to begin with but soon understood what was going on. There is literally no breathing room in this book. Good storyline, I’m still a little unsure on zombies but so much going on that’s easy to put aside!

Other Than Half-Dead! An Amazing Story!!

A unique & original story! Mia Jo Celeste is detail oriented and creates an imaginative world and characters. The storylines are interesting and beautifully written. They immediately grab your attention and hold it until the very end, keeping you at the edge of your seat at times. There is great character development, the author gives descriptive details of the supernatural creatures and how they came about. There was great chemistry between the leads, Evie and Victor, she was the good to his bad, they made a great team. This book is filled with a lot of action, drama, thrilling suspense, horror and some romance. I listened to the audible edition, Keira Stevens does a wonderful job narrating and telling the story. She performs the voices of all the characters and brings them to life from the pages to your ears. Thanks for another great listen!! Thank you 🎧AudiobookObsession