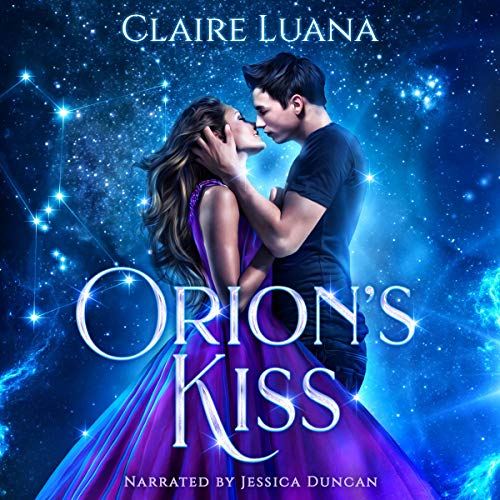 By: Claire Luana
Narrated by: Jessica Duncan
Try for $0.00

They are ancient enemies. They are each other’s only hope.

Merope is forced to watch as her sisters die lifetime after lifetime. In his anger at their ancient rebuke, Zeus cursed the seven Pleiades sisters - six to die, and Merope, the youngest, to give witness.

Through many centuries and lives, Merope has tried everything to avert disaster, but she has always failed. For his crimes against the gods, Orion is cursed to commit the unspeakable acts Merope tries so hard to prevent. Orion has little hope against the power of the gods - he is resigned that this cruel sentence will be his eternity. Until an unexpected twist of fate shows them both that this lifetime could be different. And that together, they may harness a force powerful enough to break the chains of destiny that bind them once and for all.

Click on the "buy now" button to get this stand-alone paranormal romance today!

What listeners say about Orion's Kiss

Loved the story. No cliffhangers and it kept you interested..... kidnapping, murder, adventure and romance.

They are ancient enemies...
They are each other’s only hope...

Really enjoyable and good read. A good read with a lovely and unique tale,

Hard to start but good story.

I hard a hard time with this story. The beginning was rough for me because I couldn't imagine someone who is ancient being stuck in a young girls body, making terrible decisions like a young girl. The fact that murder was so dominant in her brain being a young high school girl was odd and unfitting. The situations she put herself and her friends in make me think "well that won't end well and was not smart, I expected someone ancient to make better decisions then this". That was a common thought in the beginning of the book, but after that part the rest was easier to deal with, 2 young kids with ancients minds that have a connection and now that they finally connected, it shows how misunderstood everything was and what a waste of time it has been.

I did enjoy the book I just had to push through the first few chapters.

I really enjoyed reading this book, I didn’t think things would turn out like they did but it was awesome getting a happy ending. The narration was really good.

I loved the incorporation of Greek mythology

Meriah is a reincarnated nymph/titan, one of the seven Pleiades, cursed to watch her sisters die over and over in each lifetime. The only way to stop the cycle is to kill Orion, before he can kill her sisters again.
The book was a little hard to get into, with some quite implausible seeming things, even for a fantasy book. Mer and her friend talking about murder as if it's a simple, normal thing to do. Then there's the guilt she feels for annoying or hurting Ryan even though she's supposed to hate him.
Overall I enjoyed the book though it was a bit too romance-driven for me, but that's just my personal taste. I loved the incorporation of Greek mythology. I wasn't a big fan of the narrator, there were too many weird pauses and breaths etc. which jarred me out of the story.

Ms Duncan made the characters come alive w her various vocal intonations. This would be a good book to introduce a bit of mythology to a teen. The parents would be glad that there is no explicit sex.

A wonderful story that weaves together reincarnation with Greek mythology to create a unique and interesting tale that keeps you spellbound until the end.

I enjoyed this interesting story. An intriguing take on the curse affecting Orion and the Pleiades sister. Sometimes the fates can be changed...

Orion’s KISS is a well written story by Claire Luana and narrated by Jessica Duncan.

I really enjoyed this audiobook--it was a nice, easy listen with fun characters, a nice love story, and a surprisingly high-stakes plot. The Greek myths were used well, and they were worked into the story in a way I'd never seen before in YA lit. I love the little twists and turns, and I especially loved seeing how the characters navigated them. There were definitely a few turns that caught me by surprise, and I found myself really interested in the characters and their plight to break Zeus' curse.

The best part of this book for me was the characters. They were funny, realistic, and charming, and I found myself really committed to the love story once it got going. It did take me a little bit to get into the story, as the first few chapters were pretty heavy on exposition, but once it got going, it really got going.

The narrator was great, and I would happily listen to her again. Overall, I would recommend this book to anyone looking for a quick and fun teen romance with an interesting use of Greek mythology!

The story was good, and the narrator Jessica Duncan did a wondeful job with the narration of the story.