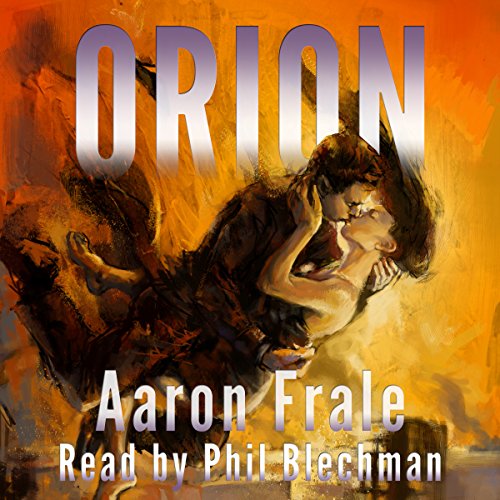 By: Aaron Frale
Narrated by: Phil Blechman
Try for $0.00

Whether death comes from a stab wound, a bullet to the brain, or just plain dumb luck, he always comes back.

He is glad to have the second chances because there is a princess in each life who seems to be in trouble. Whether she's a nurse in the Vietnam War or medieval English royalty, Orion is determined to win her over.

What listeners say about Orion

Orion has some hit and misses nothing majorly wrong, but a few hiccups that got me. First of all, I enjoyed the whole reincarnation aspect, with all the previous lives memories being intact. That was fun. Secondly, his pursuit of the female was also interesting as it unveiled. Orion is a good egg, in spite of some of the crappy things that have happened to him over his various lives. You'll like him, and you'll root for him. Third, the story itself is intriguing and will draw you in quickly.

Some of the flaws were, first among all other things, the continuous use of music in between scenes. This annoying music just rolls in and plays for a few seconds until a transition takes place. Over and over again. It really grated on my nerves. Secondly, I sort of get that the guy telling the story would speak in a modern way, and when he retold that tale, as Orion is doing to you, he would keep it modern in style, but I would have liked to see some medieval language mannerisms and euphemisms being used in their speech patterns, or even when he was a Roman soldier, just watch Spartacus for few episodes and add that in. That would earn my gratitude. Anachronistic speech when recounting an old life from another era makes that era lose something. But, dang, more than anything that music was just awful. It was out of place, and jarring every single time it appeared. It made me think of those old read and listen book/record combos where the record would ding when you were supposed to turn the page. Only here there were no pages to turn.

I really don't want you to feel like this isn't a great story, it is, and Orion's quest (uphill battle that it is) reminds me of that couple from time bandits, who were always almost about to become a couple, and then something would happen when the bandits showed up and botch their chances. The whole living through history one life at a time was really fun, and you would think that after a point you would get bored of the pursuit or of living eternally. Orion seems to make it through those issues and go beyond. It is a good character study on how you might behave if you remembered every life you had ever lived. Don't miss out on a great book, and you can overlook those minor complaints I had.


Phil Blechman does a great job narrating. He had fun with the characters, and was at ease reading the story. He did some very nice voices, and added in some accents and flairs that would have been temporally appropriate. Blechman is very easy to listen to, and he clearly empathizes with Orion. Even though I did receive a promo code for this review it in no way influenced my considerations of the material, and in fact, inspired me to be more honest. In fact, getting a code generally makes me harsher as a reviewer as I am more often concerned what someone like Me will decide based on my review.

The book I thought was great, it kept me engaged guessing at what the solution to Orions problem was although towards the end I was starting to get a hunch. If you are a Sci fi nerd like I am I think you will like this.

Performance was great had a great flow and tone that keeps you interested even after an hour of listening.

if this was a movie I would totally be interested in it as well just saying. Good job Aaron Frale.

i feel like the only opens up after like 3/4 of the way. could of used more stuff like the end of the. book. Stabby the real MVP.