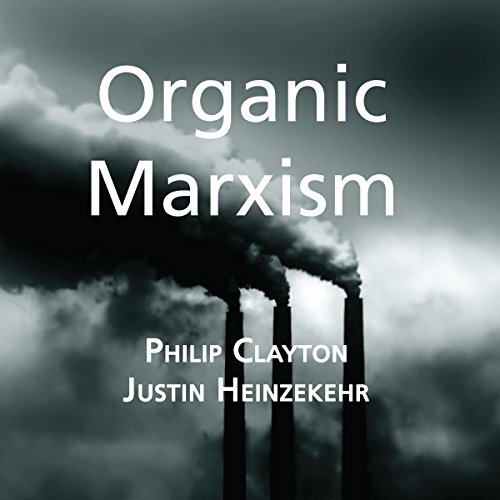 Organic Marxism: An Alternative to Capitalism and Ecological Catastrophe

By: Philip Clayton,Justin Heinzekehr
Narrated by: Seth Clayton
Try for $0.00

This revolutionary book fuses the enduring legacy of socialism - government for the common good - with the best of the environmental movement and the newest insights from sustainability studies. The result is a manifesto in the tradition of Bill McKibben's Eaarth - a road map forward in the face of the growing environmental catastrophe, which is the most complex crisis humanity has ever faced.

American conservatives like to say that Marxism was destroyed by its opponents and by the mistakes of Marxist governments. Organic Marxism provides the definitive answer to this charge. New economic evidence reveals that Marx's predictions are coming true in ways once thought impossible. Today the wealthiest class, the richest 1 percent, possesses more wealth and power than ever before, whereas the 99 percent are slipping economically, and the majority of humans live in increasing poverty. Above all else, the global environmental crisis changes everything.

Clayton and Heinzekehr show how, over the last decades, rich individuals and multinational corporations have acted selfishly to increase their own wealth - with devastating ecological consequences. The data make it clear that the planet has reached the limits of its capacity. The authors trace the unimaginable environmental and social consequences that (scientists tell us) global warming will bring: mass extinctions, food and water shortages, violent weather, rising oceans. Why, then, do our governments continue to favor the wealthy? Why do they take no action...or actually worsen the situation?

Organic Marxism shows why the situation is not hopeless, however. The vast majority of humans favor sustainable systems and lifestyles.

What listeners say about Organic Marxism: An Alternative to Capitalism and Ecological Catastrophe

It's basically a revision of Marxism where you have to wait for environmental disaster and devastation before you can take any steps towards change. For this reason the book delves into abstract utopianism throughout when it comes to providing actual solutions for overthrowing capitalist anarchy. It also uses the word &quot;reform&quot; a lot when referring to what Marx wanted when he was clearly a revolutionary if you care to read the Communist Manifesto. The book criticizes Marx, Lenin and Mao for being overly deterministic and &quot;certain&quot; of a socialist order without touching on the concrete socioeconomic realities that were interlocked with their time. It focuses solely on and criticizes their &quot;ideas&quot; as leaders in an idealist way by doing this. Suggesting that &quot;if only their ideas were correct socialism would've worked!&quot;. This is true in an abstract sense, but you can't promote this &quot;organic&quot; view of dialectics (which isn't even really new) but then criticize previous socialist governments solely by looking at their ideas without looking at their concrete histories and contexts. The critique needs to be concrete and real. It's intellectually dishonest and hypocritical to do this.

On another note the book attempts to turn Marx into an eco-socialist and thus treats class struggle (a central factor in Marx and Engels work) as a peripheral or unnecessary aspect of Marx when it was in fact driving his entire theory and worldview. To reduce class struggle to &quot;modernism&quot; is ridiculous. There's no harm in emphasizing Marx's views on the environment and the like, but it basically becomes liberalism while purporting not to be when it virtually ignores class struggle while doing so. It doesn't provide any solutions with dealing with or overthrowing capitalist states and is basically environmental determinism in the camp of Jared Diamond with very slight socialist leanings. The narrator was great but the book itself a 2/5 in terms of practicality.

The fact that you're looking into Marxism, whether for personal or academic reasons, this has a holistic and relevant perspective on Marxism in the modern day.
Critical and practicable.

So boring book , they are talking about something but not actually discussing
This book could be sum in just 20 pages and rest are just nothing