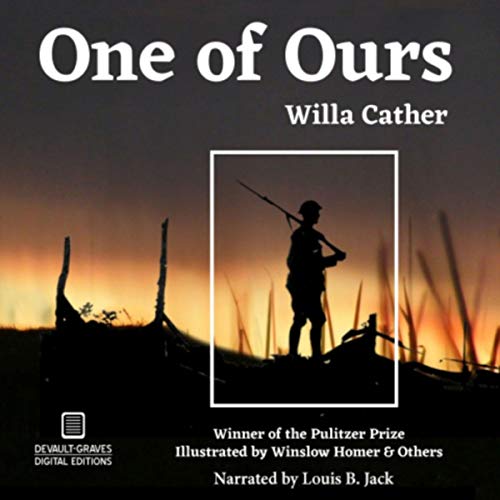 This is One of Ours, the Pulitzer Prize-winning novel by Willa Cather, America’s greatest writer of the prairie heartland. It is set in rural Nebraska in the early 20th century prior to the first World War that enveloped Europe and eventually the United States.

The story focuses on the young Claude Wheeler, a well-to-do farmer’s son who secretly longs for something to take him away from the hum-drum agrarian life he has inherited. As he prepares to take over his family’s farm business, war intrudes and Claude is thrust into the harsh realities of the death and destruction of clashing armies.

Brilliantly and evocatively written, with a firm grasp of the tenor of those perilous times, Cather breathes life into her characters and the Midwest that was her home.

What listeners say about One of Ours

This book was sent to me by my friend Lous B. Jack, the reader. It puts one on the spot in the case of knowing the reader.
What if I didn't like it? However, I had no worries on that count. At the start, I was aware that it was Louis reading. As the story progressed, the characters came alive and I forgot about Louis. He embodied the subtle differences in the voices of Claude, the main character and his father and brother. The voice of Claude's mother emanated the warmth and faith she had in her son, even as he struggled to find his place in the world. German and Austrian neighbors came alive, and when Claude got to France, the halting French of Claude contrasted with the natural French of the inhabitants. (It helps that Louis speaks French). As the book unfolded with the description of what fighting in WWI was like, Louis's love for the book and the characters shone through.

Willa Cather is an insightful writer, in descriptions, knowledge of farming and fighting wars and being on the rough seas. We felt the life on the farm, the long days of harvesting, the role of religion for rural and small town families. Experiencing the early 20th century through her eyes, brought me to the farms that my grandparents had when they came from Germany. Then in France, I imagined my other grandfather, a Frenchman, who was called to fight even though he had been in the US for 8 years.

I give Louis the highest marks for his reading and for choosing this jewel of a book.

Five Stars All Around!

I have worked closely with Willa Cather’s personal letters and novels for over two years now, and thus have many good things to say about her writing, including One of Ours. This Pulitzer Prize-winning novel tells the story of Claude Wheeler, a Midwestern boy who eventually finds purpose at war—a tale that inspired many during Cather’s time.

Most notably, though, the experience of this story was altered in a very positive way by the narration of Louis B. Jack. His voice matches this story perfectly—gentle and rigid in all of the right places! I have not often been a fan of audiobooks, but I loved this one. I would highly recommend this to anyone looking to hear an engaging and worthwhile story.

One of Ours
Author: Willa Cather
Narrator: Louis B. Jack

Disclaimer: This Audiobook was given by the author, narrator, or publisher at no cost via Audiobook Boom, in exchange for an unbiased honest review.

I always like to preface any reviews I give with this information.
I am a 68 year old female who has been an avid reader since I was around 10 or 11 years old.
I read mainly for entertainment purposes although I do a lot of research in areas of personal interest.
I have a great interest in many things. Ancient History and Archeology are at the top of a very long list.

Review: One of Ours is the first book I have ever read/listened to by Willa Cather. Having lived in the state of Nebraska for 13 years; I of course had heard of her many times and decided I wanted to read/listen to her book.

This is a wonderfully layered; almost seemingly orchestrated commentary of a way of life that would be incongruous to most people of the 21st century.

Willa Cather's writing is truly lyrical and her characters in this book are experienced from the inside out, rather than externally. When one experiences this type of knowledge of characters, those people become real to us. We are able to see, feel, and experience what the character does.

Claude Wheeler is the protagonist. He is a deep thinking and sensitive member of a family who on the face of it, seem very self-centered and self-involved. He has very strong beliefs of how people should be and how they should act and present themselves to the world.

Claude wants to make his own way in life and be independent; yet lacks the personal courage to defy the familial standards of that period in time. Grown men deferred to their father's wishes rather than believing in their own ideas or abilities and striking out on their own.

Initially while Claude gets some college education, he ends up giving up that education to take on farming as his father wishes.

Over the continuing course of this part of the story, we see that Claude is a man who merely exists, rather than pursuing a life of his own.

He ends up marrying a rather piously fervent woman whose real desire is to join her missionary sister in China and the marriage between Claude and Enid is not consummated. Enid's sister becomes ill and Enid goes to China and that is where Enid departs from this story.

As time progresses and Claude gets caught up in what is happening in the war; he reaches a point where he decides to join the military service. He has become increasingly unhappy with his way of life in Nebraska.

Claude seems to thrive after being in the service and in this time we get a look at some of the horrors of what happened in World War I.
(My grandfather and his brother, both served in World War I and although it was hardly ever discussed when I was a child, I do remember that it was discussed in hushed tones. There are still conflicting numbers as to how many people died worldwide as a result of the flu. Older estimates say 40-50 million people died, and later it came to be said that 50-100 million people worldwide died from this flu pandemic).


It seems to me that with Claude's independence and the freedom to live as he chooses, he is set free. While he is answerable and accountable to the military leaders in command he matures and gradually comes to love the people of France, and the country as well.

This book progresses in parts and the tone of the last part of this book changes and it seemed to me that the story at this point becomes one in which we are told the events more than being shown the events. Ms Cather's lack of experience in war is evident, I believe. The tone of the book is quite different from this point, until the last chapter.

While I was not happy with the ending of this book, I did expect it to end as it did and was not surprised.

Ms Cather was awarded the 1923 Pulitzer Prize for this novel.

Voice Actor Louis B. Jack's narration of this book was superb! I loved the different tones and nuances of voice he used in this novel. There were many different accents and he performed them realistically, I believe.

This book starts out slowly and had it been any other narrator I don't know how well I could have stuck to listening to it. Mr Jack's narration enabled me to get caught up in the telling.

My favorite character in this book was Mahailey. She seemed to be the one person who loved Claude as he was and for who he was, as he loved her.

I think this book would be enjoyed by people between the ages of 18 and above. While it contains violence and is not of the same kind as we see or read about in our time, there are parts that I found to be very unpleasant to hear about and I could have skipped those parts.

This book is, quite simply, a masterpiece. Willa Cather weaves this tale in her understated, yet powerful style. The setting provides the backdrop for the lives of a cast of well-developed and multi-dimensional characters. I found myself thinking about the story long after I finished reading.

One of Ours
: Willa Cather

Thi is a 1923 Pulitzer Prize winning novel. Unlike, most reviews I have seen: I have not read and or listened to other works by this author.

"One of Ours" begins in Nebraska where Claude is growing and learning this isn't the life he wants. After a long meandering trip throughout his experiences WWI has begun and Claude is ready to go. Most of the second half of the book shows an unrealistic ways of war, but what do I know? The listener will have to judge for themselves.


The narration was well done. Louis B. Jack's voice is a great compliment to the novel.