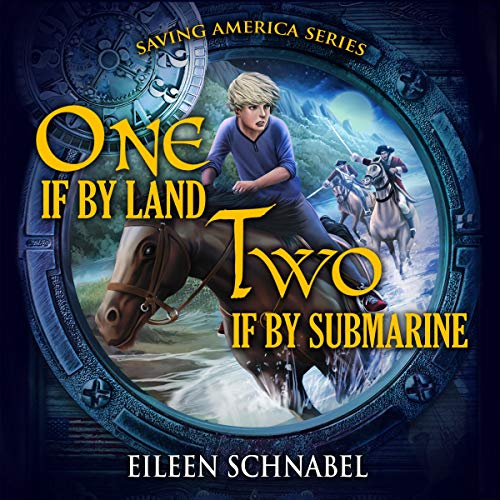 One If by Land, Two If by Submarine

One If by Land, Two If by Submarine

When Paul Revere is kidnapped by a time traveler determined to change the outcome of the American Revolution, 13-year-old Kep Westguard is sent to Boston, in 1775, to take his famous midnight ride.

Kep’s four-person team has 24 hours to light the famous lanterns at Old North Church, warn Lexington and Concord that the British are coming, and rescue John Hancock and Samuel Adams from hanging as traitors to the crown.

As the clock ticks, one teammate is arrested as a runaway slave, a British watchman stops another from lighting the lanterns, and Kep nearly drowns when he attempts to cross the Charles River in a patriot inventor’s prototype wooden, hand-crank submarine.

When Hancock and Adams ask Kep to sneak a trunk of critical papers out from under the eyes of the British Army during the Battle of Lexington, Kep has to decide how much he’s willing to sacrifice for his country. If he fails, there will be no America to return to.

This is a fun and educational YA story. While billed as Book 1 of a series, it works fine as a stand-alone book as well. The characters are interesting and, once they realize the reality of what they are dealing with, become likeable (I found some of them rather annoying up until reality hit them like an angry Redcoat). One of the great parts is that the book not only introduces the better-known historical figures who were relevant at the time and place of Paul Revere's ride, but interesting and important figures who are less well-known to the majority of American readers/listeners who only get the (very) basics that are barely covered in elementary-grade history classes these days. The book is good for kids down to grade 3 in my opinion, although for readers/listeners younger than 7th grade I would recommend a parent read/listen along or before their children to be able to discuss questions that a child may raise or the important facts in context (i.e. the realities of human slavery as it existed, modern versus historical views of individual rights, etc). Highly recommended!

Disclaimer: I was given this free review copy audiobook and have voluntarily left this review.

This is an interesting mix of time travel and historical fiction. The scenes near Boston, in April 1775, are very well done. It was a tense time and the story captures that feeling. Excellent narration by Kevin Clay. I was impressed by the author's inclusion of the African-American experience during the American Revolution with notable historical figures appearing in the book.
A considerable amount of historical research must have gone into the writing of the novel. Action, adventure, and even some mystery are woven into the plot. Educational and entertaining – an excellent book.

Great alternative view of the revolution for kids

This is a great look at the revolutionary war for kids. I like the way they were immersed in it and came to appreciate the struggles and sacrifices that have been made for their rights and freedoms. They learn as well that there is more to life than just their own selfish aims. I liked the family secrets and knowledge that came out over the story, too. I have to admit that I found T.J. to be very annoying at first, and I enjoyed more the scenes that he was not in, but I suppose he was a necessary character to get some of the points across, and other listeners may like his attitude. I did not. Still, I look forward to more audiobooks in this series. The bad guys are still out there, and I am sure they are not done yet.

The narration is very good. The characters were all given very distinct voices that really brought them to life.

I received a free copy of this audiobook at my request and have voluntarily left this honest review.

History is about to change. Paul Revere is missing, presumed kidnapped and Samuel Adams and John Hancock are in a precarious situation as well. Kep, TJ, Max, and Tela are charged with traveling back and taking the infamous ride to warn the colonists of the British invasion as well as rescuing a trunk of documents for John Hancock that could put a deadlier spin on the outcome of the war. Several twists keep this listen exciting and riveting! Kep, TJ, Max and Tela are all kids and in 24 hours or less they must right the wrongs.

Action-packed, Eileen Schnabel captures our imagination and runs with it. Well written, the plot is executed beautifully with finesse and charm. One cannot help but fall in love with the kids and smile with the fresh take on Hancock and Adams. It is a fresh way to look at time travel and the intrigue was fascinating. The characters were very well developed, each character was realistic and her attention to detail made the story unforgettable. Well written with realistic dialog and interactions, it is an easy listen.

Narrated by Kevin Clay, the story is wonderfully performed. Clay moved the story along with his skilled voices and added just the right mix of emotions. Clay brought the characters to life, including the nasty Fox and Rat Face!

The production quality of this book was well done and clear.

Regardless of your age, this is a book that will drag you in.

I listened to this one with my 14 year old son and we both thoroughly enjoyed it! It starts out with a group of kids attending a reenactment camp for the Revolutionary War Era in order to win a scholarship. They quickly find themselves in a plot to go back in time to save history from be altered. This was well written, researched and completely entertaining! The narrator does a great job with the voices, accents, acting and overall narration.

Morality rating- PG to PG13- This book was really pretty clean. There was some minor cussing but nothing extreme (no f-bombs) the cussing took place in scenes where it made since and was just a few times throughout the book. The part the really pushed it closer to the PG13 level for me was in a couple scenes where there were graphic violence/injuries (example- very descriptive about removing a bullet and a battle scene). My son has a great imagination and can visualize details so that scene in particular I thought he was going to throw up. So use your best judgement with how your kids react to that, but I would recommend 3rd grade to adults level.

I received a free copy to review and a gave it a listen. I like the story and the characters. Its like if the kids from goonies or space camp time traveled to revolutionary war times. Its a lot of fun and can't wait to see what happens next.