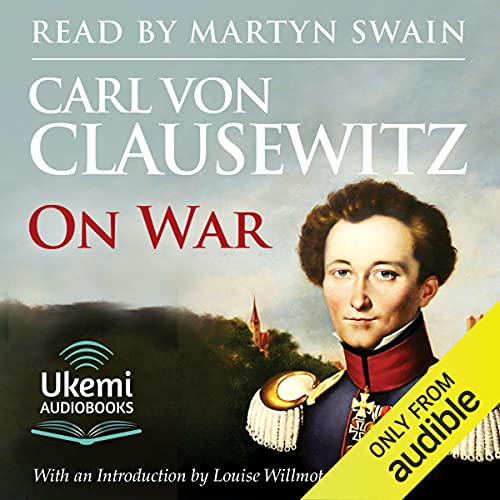 By: Carl von Clausewitz
Narrated by: Martyn Swain
Try for $0.00

On War was first published in 1832, at a time when muskets and cavalry were a dominating presence on the battlefield. Yet in the 21st century, it remains a much-valued and studied treatise on the subject - perhaps the most important European classic of its kind - and this despite the author’s demise before he could finish what was an extended review of the whole subject of military strategy. Why is that? As Louise Willmot, lecturer in history, Open University, explains in her lucid introduction, because ‘it was the first to propose a comprehensive theory applicable to every stage of military history and practice’.

Vom Kriege, to give it its original German title, is in effect ‘a study of war in its entirety’. Carl Maria von Clausewitz (1780-1831) served in the Prussian army during the wars against Napoleonic France. He also served with the Russian army and then again in the Prussian army under Blücher during the final push against Napoleon. He was, in part, prompted to write On War following the initial successes of Napoleon. Clausewitz presents a simple definition of war as ‘an act of violence intended to compel our opponent to fulfil our will’. But he goes further to suggest two types of war: first, ‘absolute’ war, which only ends in the complete victory of one side over another; there is no place for moderation. Second, ‘limited’ war, which takes into account political realities: war is ‘simply the continuation of policy by other means’. Though not considering the moral issues of war, Clausewitz does advocate taking a rational objective in protecting the state and its interests. As a result, in war, military men should never be allowed to preside over the political purpose.

The decision to publish Clausewitz’s text despite it being unfinished (he died unexpectedly of cholera at the age of 51) was taken by his widow, Marie von Clausewitz. On War contains the six complete books along with the substantial ‘sketches’ for book VII and book VIII. The overall plan is as follows: book I, On the Nature of War; book II, On the Theory of War; book III, Of Strategy in General; book IV, The Combat; book V, Military Forces; book VI, Defence; Sketches for book VII, The Attack; Sketches for book VIII, Plan of War.

This Ukemi recording opens with the introduction by Louise Wilmot, lecturer in history, Open University, and continues with the preface by Marie von Clausewitz (read by Sarah Sherborne). The translation is by Colonel J. J. Graham, revised and with footnotes by Colonel F. N. Maude.

What listeners say about On War