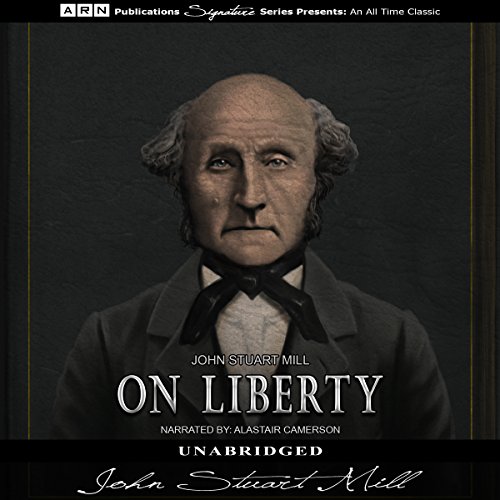 By: John Stuart Mill
Narrated by: Alastair Cameron
Try for $0.00

On Liberty is a book by John Stuart Mill, one of the most celebrated philosophers on the subject of leadership and governing ideals. The book focuses on Mill's philosophy on utilitarianism which is one of his defining principles. The principles of the book are focused on developing a relationship between the ruling authority and liberty. The work was meant to be a short essay but it was expanded to cover all his principles about liberty and utilitarianism. The work begins like most of his philosophical works; by introducing the historical background about the struggle that has always existed between liberty and authority.

Mill argues that in a way democracy encourages what he terms as "tyranny of the majority". He argues that the authority of the ruling class should be controlled by the liberty and the freedoms of the citizens. With these views he sets the tone for the whole book and goes into great details about the relationship between liberty and authority. Mill stated that this book was not his work alone because he collaborated with his wife Harriet Mill and this is evident especially when compared to his previous essays. The book was well received and it remains a philosophical classic.

What listeners say about On Liberty

This is tremendous. It should be mandatory reading for every person in the USA. It was written over a hundred years ago, but the theories that Mill talks about are perfectly relevant to what is happening in today's society. The liberty of the individual is being trampled by the voice of the majority. Mill wonderfully explains why that is the opposite of what we should be doing. The narrator has kind of an annoying voice, but it wasn't so bad that it diminished the experience.

Everyone should read this.

Half the problems in the world would go away if this were required reading for High school Seniors.

Mills' On Liberty is essential re freedom

Though dense in logic and using some out dated lingo, this is a necessary book to consume for anyone seeking to appreciate Liberty and free speech.