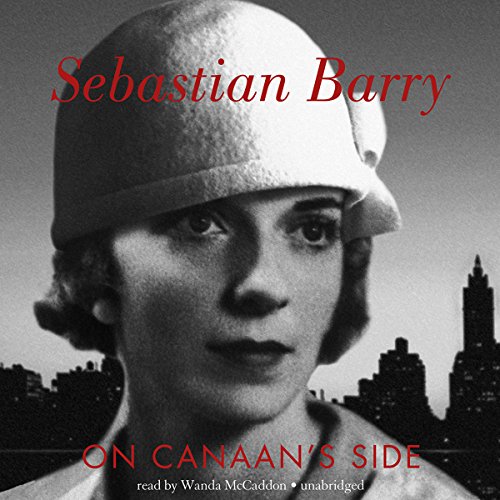 By: Sebastian Barry
Narrated by: Wanda McCaddon
Try for $0.00

From the two-time Man Booker short-listed author of The Secret Scripture comes a magnificent new novel that is the story of the twentieth century in America.

Told in the first person, as a narrative of Lilly Bere’s life over seventeen days, On Canaan’s Side opens as Lilly mourns the loss of her grandson, Bill. Lilly revisits her past, going back to the moment she was forced to flee Ireland at the end of the First World War, and continues her tale in America, a world filled with both hope and danger.

At once epic and intimate, Lilly’s story unfolds as she tries to make sense of the sorrows and troubles of her life and of the people whose lives she has touched. Spanning nearly seven decades, from the Great Depression to World War II and the Vietnam War, it is the heartbreaking story of a woman whose capability to love is enormous and whose compassion, even for those who have wronged her, is astonishing.

Sebastian Barry’s plays have been produced in London, Dublin, Sydney, and New York. His novel A Long, Long Way was shortlisted for the Man Booker Prize, as was The Secret Scripture, which was also a Los Angeles Times Book Prize finalist and winner of the Costa Book of the Year Award and the James Tait Black Prize for Fiction, as well as the Irish Novel of the Year. Barry lives in Wicklow, Ireland, with his wife and three children.

“On Canaan’s Side is written with vast sympathy and tenderness. Sebastian Barry’s handling of voice and cadence is masterly. His fictional universe is filled with life, quiet truth, and exquisite intimacy; it is also fully alert to the power and irony of history. In evoking Lilly Bere, he has created a most memorable character.”—(Colm Tóibín, author of the Costa Novel Award–winning Brooklyn)

What listeners say about On Canaan’s Side

This is the voice of a nearly-90 Irishwoman describing the course of her life, mostly led in America. The narration is perfect, which is so important with a character piece like this. Lily's loses, one after the other, nearly every person, and certainly every man, she has ever loved to the various forms of violence or injustice of the 20th century, but especially to war.

It *is* a sad story, but in the nourishing way that's not just dreary. The writing is very good, very evocative, full of powerful little observations about life and a strong sense of place and love. Lily doesn't perceive herself as a tragic figure, and she certainly doesn't wallow in self-pity, so maybe that's why it leaves you with such a sense of strength. I think the author is trying to portray the personal loss of all the women of the world, especially the ordinary, working class women, that so often is overlooked in accounts of the world's big events. I ended up very moved by it.

That said it seems to start very slowly, and I wasn't sure at the beginning where it was going. There are some surprises, but this is not so much about the story. You have to stick with it, which is easy to do with this narrator. It will grow on you.

I found this novel profoundly sad, but the narrative voice of Lily, the 89 year old narrator, was so vivid and interesting, that I kept with it. Irish and Irish-American history of the last 100 years as played out in the life of LIly is a dark and fascinating topic, and Barry does a good job with it. I do think that Lily, who is writing down her memories after her grandson has died, would not have quite the poetic and descriptive torrents of words that Barry puts in her mouth, but I was willing to suspend my disbelief because I enjoyed the writing. Good narration by Wanda McCaddon.

If you have read Barry's The Secret Scriptures, I think you will like this one, too.

Excellent Story, Enhanced by the Performance

Would you listen to On Canaan’s Side again? Why?

Although I never listen to a book twice, this was one of the most enjoyable audio books I have ever listened to. The characters were engaging and the reader's accent made them even more appealing.

What was one of the most memorable moments of On Canaan’s Side?

There is a secret about Lily's first husband that took me by surprise. I had come up with a thousand different things he was hiding, but I never hit on the right one. This made the reader compelled to finish the story to find out the secret.

Warm accent that brought the characters to life.

A story of personal reflection, courage, and love.

May be a great story but again, I had to stop - some authors insist on adding something about an animal suffering even if it does nothing for the story. Personally I don't continue once this occurs.

One of the Very Best

The blend between Sebastian Barry's exquisite prose and Wanda McCaddon's beautiful Irish brogue is absolutely fabulous. This is better than one of the best plays you've ever seen--and it gives you a real sense of the America of the 20th Century and immigrant life. I was so excited to hear the cadence of some of T.S.Elliot's work in Barry's prose. McCaddon must have heard it too. Don't miss this one.

Great interesting story, narrated excellently by Wanda McCaddon. One just cannot help but feel that it is very sad and if you are prone to be impacted by your audiobooks, then this one will not cheer you up. Nevertheless, it is a great story and I am very glad I listened to it.

Poetic prose brings out the beauty

This is the kind of story that if narrated as it unfolded would have been too sad. The way it was done was exquisite. An amazing life story told in bits as an old woman remembers back over her life. All of it could be gut wrenching, but the way the story is told makes it easier to hold. It reminds me of the book "English Patient" - another sad story told in poetic prose and a light-handed manner.I liked learning about that period in Ireland - had never thought about how it would affect individuals. I also liked the surprises in the book. You don't expect them.But best of all is the the way the words read by Wanda McCaddon just roll over me. It took the first chapter or two to fully understand her lovely Irish accent - and then it really made the story come to life. I've been recommending this to all my friends.

Save me from men who think women exist to serve

As I read (or more precisely, listened to) Sebastian Barry’s novel, I had trouble putting my finger on just what I didn’t like about it. I did like the form of the novel, a sort of diary written by an old woman in which she looks back at her long life. I really loved the way Barry described people, for instance, a man operating a ride at an amusement park was described as someone who “hadn’t had his ears pinned down properly.” Cassie, the protagonist’s best friend, was described as a woman who would have looked good as the figurehead on the prow of a ship.

But there was an emptiness at the heart of the novel that left me cold and toward the end I figured out what it was. Barry created a female protagonist who is an idealized, impossible, saint of a woman. She is misused by every man in her life, and yet cannot stop herself from catering to their every whim and forgiving them for every wrong. This is probably Barry’s idea of the perfect mother, someone who will not mind it when the son/grandson that she has formed her life around shuts her out, disappears, ignores and shuns her. She somehow perseveres through it all with a forgiving nature that is impossible to believe. And the ending . . . I just couldn’t buy her final decision. Why she would care that much for the grandson who seems to have treated her like a short order cook and then abandoned her is never made clear. This novel is just some man’s fantasy of how a mother, or mother figure, should give up her whole existence to nurture others with no life of her own. Girls, go read something empowering and leave this on the shelf.

[I listened to this as an audio book read by Wanda McCaddon, who did a nice job].

I didn't finish this book. The theme was dark and uninviting. I would not recommend it.

I thoroughly enjoyed this book and the wonderful narration. The main character is very honest and loving and gentle and you root for her every moment. The story has the usual Barry theme of someone being pursued and then the many small but sad events in her life. Highly recommend this book.